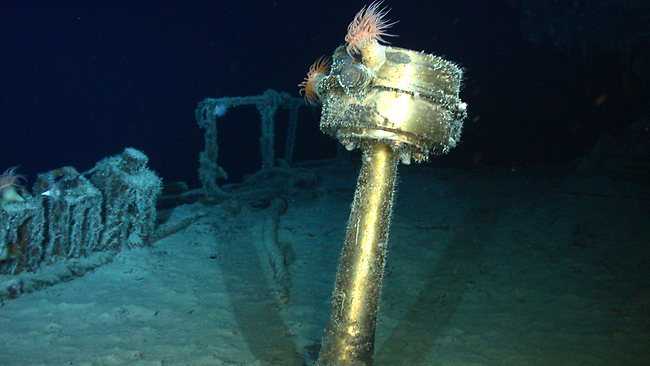 The ship was carrying 200 tonnes of silver when it was sunk. Picture: AFP

WHEN the SS Gairsoppa was torpedoed by a German U-boat, it took its huge silver cargo to a watery grave.

Seventy years later, US divers are working to recover what may well be the biggest shipwreck haul ever.

Florida-based Odyssey Marine Exploration has confirmed the identity and location of the Gairsoppa and cited official documents indicating the ship was carrying some 219 tonnes of silver coins and bullion when it sank in 1941 in the North Atlantic some 490 kilometres off the Irish coast.
That's worth about $200 million today, which would make it history's largest recovery of precious metals lost at sea, Odyssey said.

That's worth about $200 million today, which would make it history's largest recovery of precious metals lost at sea, Odyssey said.

"We've accomplished the first phase of this project - the location and identification of the target shipwreck - and now we're hard at work planning for the recovery phase," Odyssey senior project manager Andrew Craig said.

"Given the orientation and condition of the shipwreck, we are extremely confident that our planned salvage operation will be well suited for the recovery of this silver cargo."

Recovery is expected to begin next year.

After a tender process the British government awarded Odyssey an exclusive salvage contract for the cargo, and under the agreement Odyssey will retain 80 per cent of the silver bullion salvaged from the wreck.

The 125-metre Gairsoppa had been sailing from India back to Britain in February 1941, and was in a convoy of ships when a storm hit. Running low on fuel, the Gairsoppa broke off from the convoy and set a course for Galway, Ireland.

It never made it, succumbing to a U-boat's torpedo in the contested waters of the North Atlantic. Of the 85 people on board, only one survived.

Source
You must log in or register to reply here.