He has been sentenced in his absence.....while Zimbabwe refuses to extradite him... 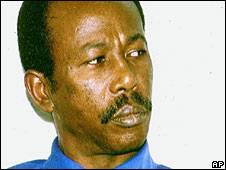 It overturned on appeal last year's ruling by the High Court sentencing Mengistu and 18 of his most senior aides to life in prison.

The judge said he had passed the death sentence as the defendants had tortured and executed thousands of innocent people, which amounted to genocide.

Mengistu has lived in exile in Zimbabwe since his overthrow in 1991.
Tens of thousands of people were killed during a period of Mengistu's 17-year rule known as the Red Terror.

No extradition
"The court has decided to revoke the leniency appeal from the defendants," Judge Desta Gebru was quoted as saying by AFP news agency.


"It has sentenced them to death," he said.
The BBC's Tsigue Shiferaw says two of Mengistu's political associates who were sentenced to death live in the Italian embassy compound in the capital, Addis Ababa, where they sought refuge after Mengistu fled.
But the 16 other defendants are in jail in the capital.


Our reporter says that under Ethiopian law, the president is only person who can give amnesty if a death sentence is pronounced by a court.
Mengistu was found guilty of genocide in 2006 after a 12-year trial and was sentenced to life in prison the next year.


At the time, Zimbabwe said it would not extradite the former Ethiopian leader.


Correspondents say what is not clear is whether a change of government in Zimbabwe - where a presidential run-off is due next month - might bring a change of policy.


Mengistu's military committee, known as the Derg, came to power in 1974 after they toppled Ethiopia's last Emperor, Haile Selassie.


The most brutal period of the regime was known as the Red Terror when suspected opponents and intellectuals were rounded up and killed.


Many of their bodies ended up in mass graves or were just tossed into the street for families to collect.
Click to expand...