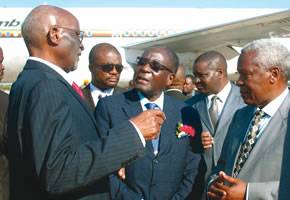 President Mugabe has returned after being stuck in New York because of problems with his chartered Air Zimbabwe plane.

He told reporters in Harare yesterday soon after arriving back home from New York where he attended the 66th Session of the United Nations General Assembly, that he was hoping for an inclusive government in Libya.

"As far as we are concerned, the African position is that the NTC can only have a seat in the AU if the Summit of the AU recognises that," said President Mugabe. "In fact, now that they are in control, they are the de-facto authority of Libya.

"We will not go as far as the Europeans, Nato countries, to recognise them de jure to say they are the absolute government. No, of course, because we still want negotiations, inclusive negotiations between the NTC and the Gadaffi loyalists.

"So, that to us remains the issue. Will there be negotiations? Will there be an inclusive government? Will there also be the withdrawal of those who intervened illegally using Chapter VII of the (United Nations) Charter and interpreting it in a broader sense, which sense was an illegal one, in order to enable them to do the things they have been doing: pounding, battering and harassing the population of Libya."

President Mugabe said some African countries were "selling out" because they were receiving assistance from Westerners. He said divergent opinion over the Libyan conflict gave ample evidence of expediency.

"Principles are being sacrificed on the altar of expediency as (the late Ghanaian leader Kwame) Nkrumah would have said. Because you are being assisted by the West, you, therefore, must bow to the West.

"It is a terrible period and it is selling out of the principles of the founding fathers, and Zimbabwe can not stand for that."

Mugabe said the African Union (AU) determined that Libya's National Transitional Council (NTC) will only be accorded a seat on the continental body after the AU Summit accedes.

He said African leaders were backing negotiations between the NTC and Colonel Muammar Gadaffi's loyalists as well as the withdrawal of Nato forces from Libya.