MANU will take the money and run out of Africa

United will take the money and run out of Africa· £1.5m payment for Nigeria match too hard to resist 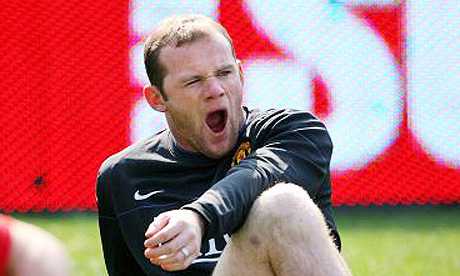 Manchester United will contest two fixtures 3,000 miles apart within 24 hours this weekend after the manager, Sir Alex Ferguson, conceded that tomorrow's encounter with Portsmouth in Nigeria - one day and a 5½-hour flight after facing Kaizer Chiefs in South Africa - is being staged for the benefit of the club's finances.

United, who banked £1m for travelling to Saudi Arabia to face Al-Hilal in Riyadh in January, are understood to be earning £1.5m by lining up against the FA Cup winners in Abuja tomorrow evening.

Arguably the most-recognised football brand in the world, United are regular recipients of hugely lucrative offers to play across the globe and the club are considering opportunities to play in India next summer.

Yet with his squad due to play at altitude against Kaizer Chiefs in Pretoria today before embarking on a flight the equivalent of a return from Manchester to Moscow for a second game in two days, Ferguson has admitted that the financial benefits of playing in Nigeria were a driving force behind the decision to accept the offer to play there.

"We have never been to Nigeria, but it was just an opportunity," he said. "You could say that it is partly financial, of course. We have to take into consideration these financial invitations because we have a big operation now. The squad is 23 to 24 players and it has to be a well-run club to be able to afford all that.

"We will name one team for Saturday and another one for the game on Sunday, but the nucleus of the players will play here. There is an issue with the climate, the heat and the altitude in Pretoria, so we will have a look at how the players are progressing during the game."

Portsmouth have already arrived in Nigeria and Harry Redknapp's team will face Kano Pillars in Abuja today before meeting United.

"I would hope that won't happen for the simple reason that the Community Shield is only seven days from the start of the season," he added. "To begin thinking of going to other countries, to Nigeria, to Dubai, at that time, when you are one week away from the start of the season, is too close, as far as I'm concerned. I think it is perfect staged at Wembley and should be kept there."

Ferguson also distanced himself from speculation that he could be installed as team manager for a Great Britain football team at the 2012 Olympics. Tournament organisers are understood to be keen to work with the Scot, but he admits that his age - and the hostility of some home nations to a GB team - make it an unlikely prospect.

"I hope I am still on this planet in 2012 first of all," he said. "I'll be 70 years of age then, so I don't need any commitment to anything like that. I would not, in any way, try to commit myself to anything like that four years away. There is nothing I can really add.

"I'm not sure they would allow it [Team GB] anyway because countries have their own identity, their own patriotism. It has been mooted for a number of years by Fifa that Great Britain has a team at the World Cup, so it would be impractical in that sense. Scotland, Northern Ireland, Wales, even England, they all have their own identities, so I don't think it is a starter."

Ferguson also revealed that he is close to adding to his backroom staff by appointing a new goalkeeping coach to replace Tony Coton, who retired due to a knee problem at the end of last season. "We have approached somebody for the job and we are waiting for clearance to employ him. Tony unfortunately had to quit because of his knee but as normal we didn't rush it, we took our time and it was about seven or 10 days ago that we decided who to try and get. We think we will have clearance by the beginning of August."

United wrestled concerns over the Kingdom's human rights record before accepting £1m to play a match in honour of former Wolves reserve Sami Al-Jaber
You must log in or register to reply here.