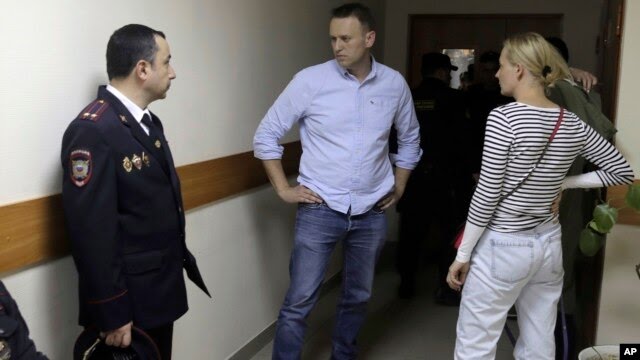 Russian opposition leader Alexei Navalny, center, and his wife Yulia talk before a hearing in a court in Moscow, Russia, on June 12, 2017.

A Moscow court has sentenced Russian opposition leader Alexei Navalny to 30 days in jail for staging an unsanctioned rally in in the capital.

Navalny was detained Monday along with hundreds of his supporters throughout the country in anti-corruption protests aimed at Russian President Vladimir Putin and his allies.

Navalny, who has announced his intention to run for president next year against Putin, was detained outside his home in Moscow shortly before demonstrators took to the streets there, as well as in St. Petersburg and other cities.

Reporters witnessed hundreds of protesters being detained, with one non-government organization tracking the demonstrations reporting that at least 600 were arrested in the capital and another 300 in St. Petersburg. More than 3,000 protested in the Siberian city of Novosibirsk, with other rallies in the southern resort Sochi, Krasnoyarsk, Kazan, Tomsk and Vladivostok.

More than 3,000 protested in the Siberian city of Novosibirsk, with other rallies taking place in the southern resort Sochi, Krasnoyarsk, Kazan, Tomsk and Vladivostok. 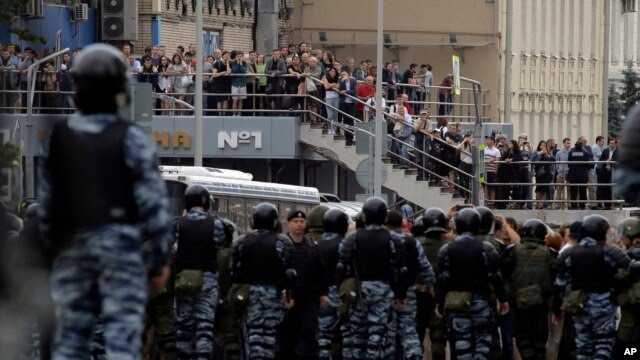 Protesters, monitored by scores of policemen, take part in a demonstration in downtown Moscow, Russia, June 12, 2017.

Police in Moscow used pepper spray on the protesters and sometimes pushed them back by beating them with batons.

As police led the demonstrators to police vans, some of the protesters shouted, "Shame!", "Putin is a thief!" and "Freedom to Navalny!"

Authorities had agreed to a location for the protest in central Moscow, but Navalny moved it late Sunday to a main thoroughfare leading to the Kremlin after he said that officials blocked construction of a stage and sound system at the original site. He claimed that authorities refused to supply him with sound and video equipment.

Moscow city hall labeled the change in the protest site a provocation and said that demonstrations would be viewed as a threat to public order, leading to the detentions.

Navalny's aides had been broadcasting about the lead-up to the protests from a Moscow studio, but authorities cut off power to the building just as the 41-year-old Navalny was being detained by police. 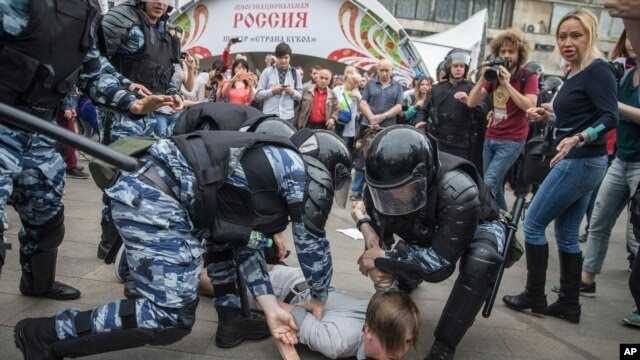 "They turned off the electricity in the studio," presenter Leonid Volkov said in complete darkness shortly before the channel went off air. It came back online after a few minutes.

Navalny's anti-corruption videos have provoked the country's most powerful officials, including one accusing Prime Minister Dmitry Medvedev, a Putin ally, of living far beyond his means. Medvedev has called the accusations politically motivated "nonsense" and called Navalny a charlatan.

In a blog post published last week, Navalny wrote, "I want changes. I want to live in a modern democratic state and I want our taxes to be converted into roads, schools and hospitals, not into yachts, palaces and vineyards."