Ordinary Germans will be glad to see the back of this particular US president, writes Kate Connolly 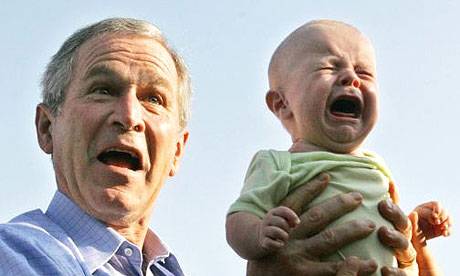 This particular young German, photographed with George Bush in 2006, would seem to echo the feeling of many of his compatriots towards the outgoing US president. Photograph: Reuters

Typically when US presidents visit Germany they walk through the Brandenburg Gate and take in the city and its historical sites.

It has not been lost on any commentator that on his farewell visit to the country, which kicks off on Tuesday night, George Bush will not be received at the heart of the capital.

Attempts to persuade him to open the brand new US embassy - back in its place after a gap of over six decades - failed. His father, George Bush Snr, a less despised figure, will come to do the honours instead, on July 4.

Instead Bush Jr is heading for the sandy plains of Brandenburg, 40 miles north of Berlin, to Schloss Meseberg, the idyllic but isolated country pad of the German government.

It is called keeping a low profile, probably a sensible thing to do for a man who has never been considered a friend by the majority of Germans. He is said to be the least popular US president in German history, and in a recent survey for the opinion pollsters Forsa, the majority of respondents went so far as to deem him to be the biggest single threat to world peace.

But neither did he, for a long time, want to have much to do with Germans either, particularly after the former chancellor Gerhard Schröder secured an election victory in 2002 thanks to his dogged insistence that he would not support the Iraq war.

In recent years the bilateral frostiness has thawed. He even gave Angela Merkel a shoulder massage at the last G8 meeting. But there is no sense that he will ever manage to retrieve his reputation here.

German gratitude for the role the US has played in much of its 20th century history - the Marshall Plan, the Berlin airlift, protection against the Soviet Union - still endures, but it has been greatly overshadowed by seven Bush years, the Iraq invasion, Guantánamo and Abu Ghraib.

It has often been said that Germans became more anti-American during this period than at any time, but the more thoughtful ones have always been quick to point out that it was rather "antibushismus".

Now they appear to be happy at the prospect of being able, as they see it, to put this unpleasant period behind them. Almost 70% have said they would vote for Barack Obama if they were able (while sympathy for John McCain is scant). They admit they donít know what Obama really stands for, but what most appeals to them is that he is not Bush.
You must log in or register to reply here.