Islam Was Not Behind 911 - Fundamental Baptist preachers

I am saddened at the ignorance of so many believers today concerning the evils behind 911. Islam had nothing to do with 911. All across America, Independent Fundamental Baptist preachers, and others, are demonizing the Muslim world, while simultaneously polishing the whited sepulchers of Judaism. Jesus said, "Woe unto you, scribes and Pharisees, hypocrites! for ye are like unto whited sepulchres, which indeed appear beautiful outward, but are within full of dead men's bones, and of all uncleanness" (Matthew 23:27). Jewish Religion of Judaism is just as Godless, heathen, and vile as IslamAmerica's preachers need to start exposing the Godless and vile filth of Judaism, which is adhered to by nearly all Jews. ​
"With an estimated 14 million adherents in 2006, Judaism is approximately the world's eleventh-largest major religious group."
SOURCE: Judaism - Wikipedia, the free encyclopedia​
Judaism boldly denies Jesus Christ, which according to 1st John 2:22 makes them LIARS and ANTICHRISTS. Don't get mad at me, God said it... "Who is a liar but he that denieth that Jesus is the Christ? He is antichrist, that denieth the Father and the Son." The most revered holy book in the Judaism faith in the Talmud, a despicable filthy publication which teaches blasphemy and pedophilia. Don't believe it? Here's an actual page out of the Talmud teaching that grown-up men can have sex with 3-year old girls...​

The Jewish Talmud, which teaches that a man having sex with a small boy is not regarded as an sexual act.​
Yet, you'll rarely, if ever, hear any American preachers exposing Judaism. Why are we so hypocritical in America, that we only demonize the sinister Islam religion, but not the vile religion of Judaism as well. God is NO respecter of persons (Acts 10:34; Romans 2:11; Ephesians 6:9; Colossians 3:25; 1st Peter 1:17). The Talmud speaks of Jesus being punished in Hell for eternity by being made to sit in a cauldron of boiling excrement. The Talmud also refers to Jesus Christ as "Balaam." This is the beloved religion of the Jews, and it is straight from the pits of Hell. Let me be clear, I love Jews and Arabs equally. I also hate Islam and Judaism equally. America's preachers have bought into the lie of Zionism, becoming respecters of persons, when God has commanded us not to do so (James 2:1, "My brethren, have not the faith of our Lord Jesus Christ, the Lord of glory, with respect of persons"). There you have it. For a better understanding if this matter, please read Zionism Verses the Bible.
So who was behind 911?The Illuminati, which is an informal term used today to refer to the global elite. They are the movers and shakers of this sinful world, all members of the occult, who control the central banks, top governments, the Supreme Court, wars, mainstream newsmedia, etc. Their official headquarters is the Council on Foreign Relations. Some members included the Rothschilds, Rockefellers, Rudolph Giuliani, the Bush family, Henry Kissinger, the DuPont family, and thousands of others. All recent presidents have been members. Nearly all White House staff have come from this woefully evil organization as well. These are the culprits behind the 911 attacks.

Amazingly, as America's preachers are publishing tracts condemning the Muslim world as crazed bombers, not a word is being spoken, or a tract published, exposing the Satanic Bohemian Grove, where top U.S. government and corporation leaders attend every year to worship Satan. What is wrong with today's preachers? 1st Timothy 6:10 gives us the answer... "For the love of money is the root of all evil..." The pastor who speaks the truth of these evils to his congregation is likely to end up in the poor house. 2nd Timothy 4:3 tells us why, "For the time will come when they will not endure sound doctrine; but after their own lusts shall they heap to themselves teachers, having itching ears." The United States has deteriorated into an intolerant society, where people will only come to church if it is to their liking, and the message makes them feel good about themselves. Even our best pastors today refrain from touching upon certain taboo issues, but they are issues of national security which are a threat to our very freedoms. Some Christian leaders are even teaching that it is sinful for U.S. citizens to cry aloud against the crimes being committed by our government.An overwhelming amount of irrefutable evidence has been uncovered, including tons of disturbing facts that cannot be explained away, concerning the 911 attacks. The smoking gun of 911 is presidential directive w199-eye. To understand the motive behind this directive, one must look deeper into the Bush families partnership with the Carlyle Group in Saudi Arabia. Also, please view the documentary on the Bush Family Fortunes. The terrorist didn't come from Iraq, they came from Saudi Arabia, friends of the Bush family. Please watchIlluminazi 911 (Free 1:23 hour startling video by Anthony J. Hilder). As you can clearly see, Islam is the least likely suspect in the 911 attacks. In fact, they are not suspects at all. The bizarre circumstances surrounding the collapse of World Trade Center building 7 is another smoking gun. Here's a video of a BBC Reporter announcing that Building 7 Had Collapsed 20 Minutes Before It Fell! This is irrefutable evidence of a government conspiracy against U.S. citizens.
ConclusionWake up America! Stop blaming the Muslims. Bin Laden is sipping Pina Colodas on an island somewhere, living it up, compliments of the New World Order gang. The true culprits behind 911 needed a fall guy, i.e., someone to blame, so they chose Bin Laden. Al Qaeda is the CIA (Central Intelligence Agency, or as some have called it, Cocaine Import Agency). The Bush administration has committed more crimes against U.S. citizens than any other administration in history, from the anti-American Patriot Acts to the Inside Job of 911. For a detailed analysis of these evils, and many more, please read How Satan Turned America Against God; by Dr. William P. Grady; ISBN: 0-9628809-3-0. Islam is a false religion, which teaches hatred and killing. This cannot be denied. However, this is exactly why Islam is also the perfect scapegoat for a much greater evil at work in the world today--The Illuminati. I would also highly recommend the eye-opening book, The New World Order, by Ralph A. Epperson; 1990; ISBN: 0-9614135-1-4; publisher: PUBLIUS PRESS, Tucson, Arizona. The average person, Christians included, believe what they see and hear on the television (or should I say, Devilvision?). God has given us the truth today, but you have to DESIRE the truth first in order to search for it. It's so much easier to just sit in front of the TV, listening to FOX LIARS, than it is to actually pick up a book and study for the truth. The New World Order is here; but sadly the average Christian today doesn't even realize it, which is evidenced by the plethora of Christian leaders in America who genuinely think Islam was responsible for the 911 attacks. ​ 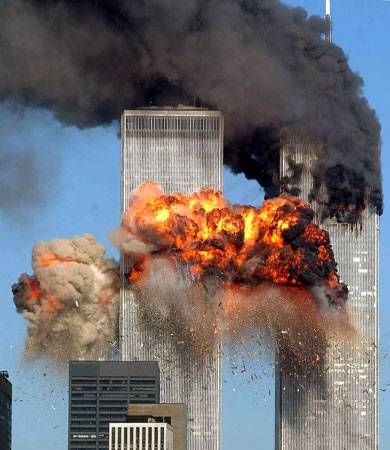 The biggest conspiracy of all is the government's official 911 story.

SOURCE: Islam Was Not Behind 911​
You must log in or register to reply here.