The President of India, Ram Nath Kovind bestowed Nari Shakti Puraskar on Kashmir woman innovator, Nasira Akhter on Tuesday, on international women’s day. She was one of the 29 women who bagged the prestigious award.

Akhter was given the award for her grassroots innovation in environmental conservation.

Hailing from Kulgam, she has developed a herb that converts polythene to ashes, thereby making polythene biodegradable.

Nasira has an interesting story. She dropped out of school in twelfth class and got busy in herbs and other innovations. She lost her husband to canvcer.

Mother of a daughter and a single parent from Kanipora village of Kulgam, she said she has been working on the herb since 1999 and in 2008 she finally got an answer to her hard labour.

The herb paste helps destroy polythene without affecting the environment.

Akhter (born 1977) said he started working on her innovation in October 199 and after around nine years; she succeeded in May 2008.

In a live demonstration in 2015 at the University of Kashmir, Nasir applied a liquid to polythene and set it afire.

After it burned down, the ashes were visibly degradable.

She has entered into an agreement with a company that has signed a not disclosure clause prevented it from disclosing any details about the herb composition,” Sayeed Nadeem from Grassroots innovations Augmentation Network, said.

“Her patent is under process and she will get it soon and her formula is being researched upon.” He said the research conducted so far on the formula are encouraging.

“She basically is talking about a ‘disposable polythene’. She claims that on burning, the polythene turns into ashes with fewer fumes and without polluting the environment,” he said.

The President actually gave 28 awards – 14 each for 2020 and 2021 to the women in recognition of their exceptional work towards women empowerment, especially the vulnerable and marginalized.

These included two women from Jammu and Kashmir. The second one is Sandhya Dhar, a social worker.

Ms Dhar, who received the award while in a wheelchair, was awarded for her contribution and dedication towards divyangjan rights.

She has founded ‘Jammu Institute of General Education and Rehabilitation’ in 2015 that conducts classes for Divyangjan and underprivileged children, the Rashtrapati Bhawan said.

The Nari Shakti Puraskar, it may be recalled here, is a Women and Child Development Ministry initiative to acknowledge the exceptional contributions made by individuals and institutions, and to celebrate women as game-changers and catalysts of positive change in society.

Prime Minister Narendra Modi has congratulated the women who were honoured for their contributions in Jammu, LG Manoj Sinha also congratulate the two female for the award. 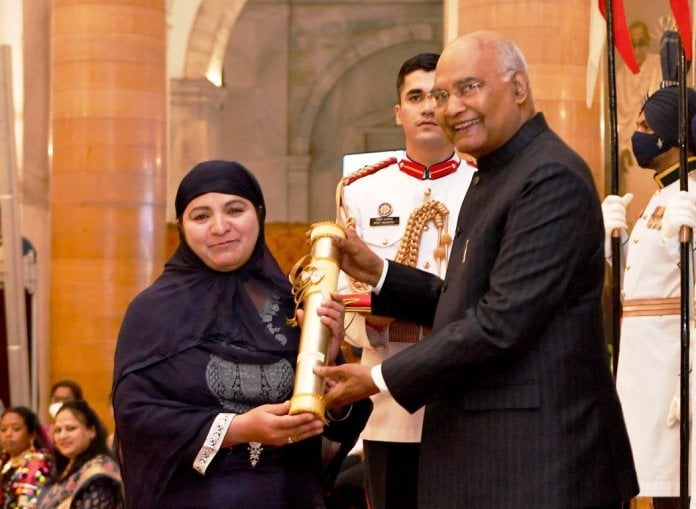 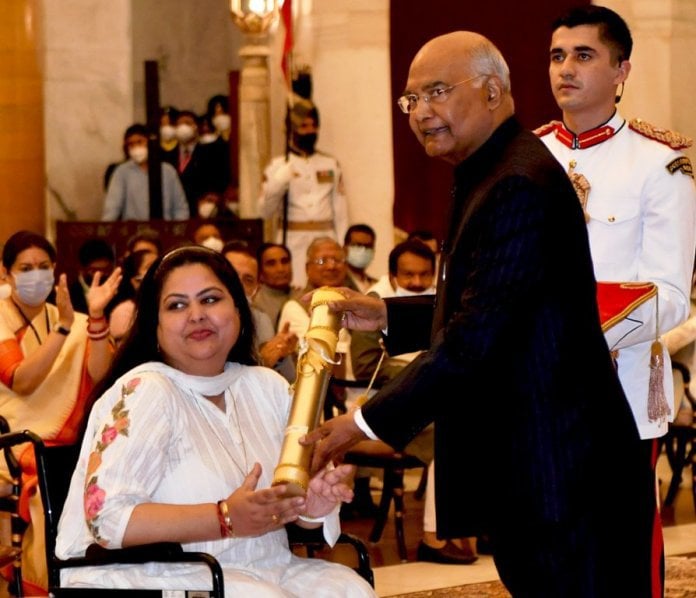