A man believed to have a Bomb has taken hostages at Hillary Clintons offices in New Hampshire. More to come...

Man Claiming To Have Bomb Holding 2 Volunteers In Rochester, N.H.; Clinton Is Not There 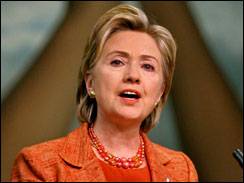 CBS/AP said:
A man claiming to have a bomb walked in to Hillary Rodham Clinton's campaign offices Friday and took hostages, police and witnesses said. The man had what appeared to be a bomb strapped to himself, said Bill Shaheen, a top state campaign official. He took two hostages, both volunteers, and released others, Shaheen said.

Witness Lettie Tzizik told television station WMUR of Manchester that she spoke to a woman shortly after she was released from the office by the suspect. The woman was carrying an infant, and crying. "She said, 'You need to call 911. A man has just walked into the Clinton office, opened his coat and showed us a bomb strapped to his chest with duct tape," Tzizik said.

Clinton was not in the New Hampshire office Friday. She was scheduled to give an address at the Democratic National Committee meeting in Vienna, Va., but she cancelled the speech after news of the incident broke, reports
CBSNews.com.

DNC Chairman Howard Dean announced from the podium that Clinton would not speak.

The campaign released the following statement: "There is an ongoing situation in our Rochester, NH office. We are in close contact with state and local authorities and are acting at their direction. We will release additional details as appropriate." Authorities were sending a tactical bomb unit to assist local police, and the area was evacuated, said Maj. Michael Hambrook of New Hampshire State Police. A nearby school also was in lockdown.

He would not comment when asked if the man is armed and dangerous. The Clinton office is located in the downtown area in a strip of several storefronts. Workers for Sen. Barack Obama's campaign office in Rochester also were evacuated, a campaign spokesman said. The office is four doors away from Clinton's. Staffers in John Edwards' office, a few buildings away, evacuated as well.
Click to expand...