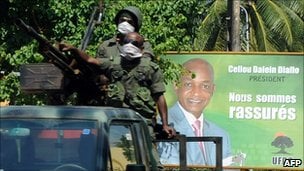 Guinea's ex-prime minister Cellou Dalein Diallo has conceded defeat to his election rival Alpha Conde, who won with 53% of the vote.
Mr Diallo said he was unhappy with the Supreme Court's rejection of his fraud complaints during last month's run-off, but he accepted its decision.
He urged his supporters to remain calm for the sake of a united Guinea.
The presidential polls mark the end of 52 years of authoritarian rule, but were marred by violence and delays.
'Stifle frustration' The BBC's Alhassan Sillah in the capital, Conakry, says even before the Supreme Court announcement late on Thursday night both candidates had made impassioned appeals for calm.
Guinea has been under a state of emergency since mid-November, after violent clashes broke out when Mr Conde, of the Rally of the Guinean People (RPG), was declared to have won the run-off.
Continue reading the main story Alpha Conde - Guinea's President Elect 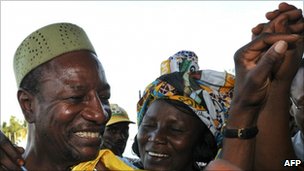 Mr Diallo, of the Union of Democratic Forces of Guinea (UFDG), won 44% in the first round in June.
He mounted a legal challenge after losing the second round, saying he believed there had been fraud in some electoral districts.
But the Supreme Court's president, Mamadou Sylla, rejected the allegations, saying the UFDG had not submitted sufficient proof that his supporters were intimidated out of voting in the northern regions of Siguiri and Kouroussa.
He also rejected a similar complaint by the RPG alleging intimidation in the region of Labe, a stronghold of Mr Diallo.
"Our complaints were not taken into account despite the strength of our arguments and the relevance of our evidence," Mr Diallo said on Friday.
"As Supreme Court decisions are final ... we have no choice but to abide by this judgement."
He said commitment to peace and a united Guinea "commands us to stifle our frustration and our suffering, to remain calm and serene and avoid any form of violence", AFP news agency reports.
As the country awaited the ruling, Mr Conde said he would be the president of all Guineans if elected and pledged to work towards national reconciliation.
The fact that the two men represent the two most populous ethnic groups in the country had marred the run-up to the poll.
Mr Diallo represents the Peul ethnic group - also known as the Fula - while Mr Conde is supported by the Malinkes.
During the election campaign clashes broke out between the two men's supporters, prompting a large-scale displacement of Peul from areas of Upper Guinea in the Malinke heartland.
Guineans are among the poorest people in West Africa, despite the fact that the former French colony is the world's leading exporter of the aluminium ore bauxite.
You must log in or register to reply here.