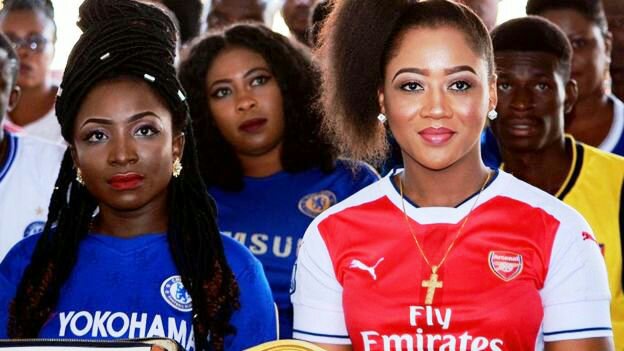 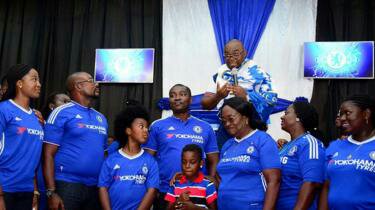 These are external links and will open in a new windowShare

A church in Ghana's capital, Accra, has held a thanksgiving service for Chelsea following its recent success in the Premier League.

Standing behind a Chelsea cake on a stage made to look like a football pitch he said: "Chelsea, by the grace of God, came first."

He told the BBC he wanted to use the power of football to talk about God.

Africa Live: Updates on this and other stories

Azigiza also led the congregation in a verse of the Chelsea anthem Blue is the Colour.

The pastor, who at one time was a radio DJ, was also teasing his immediate boss at the Living Streams International Church, Reverend Dr Ebenezer Markwei, who is an Arsenal fan.

In his sermon, Pastor Markwei talked about "the good, the bad and the ugly of rivalry" suggesting that football fans should engage in friendly rivalry.

He said there was fellowship in rejoicing in others' successes, so when it is your turn others would do the same.

The one blemish in Chelsea's domestic season was that they lost the FA Cup Final - 2-1 to Arsenal.

But during the service Azigiza thanked God for Arsenal's victory "because it means that [Arsenal manager] Arsene Wenger will stay" and they cannot win the league with him, he said.

Fans of all teams were welcome to the service and Azigiza told the BBC that he wanted to defuse rivalry between supporters of different clubs.

Although, he added, they were reminded that Chelsea had just been crowned Premier League champions.

Chelsea won the Premier League in May with 93 points, seven ahead of their nearest rivals Tottenham.

The English Premier League has a large and passionate following in Ghana.

Researched carried out by Twitter in 2015 suggested that Chelsea is the most popular side in Ghana and much of the rest of West Africa.
Ghana church holds Chelsea thanksgiving service - BBC News 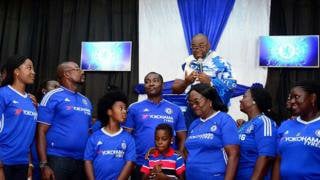