Dennis Rodman hopes to do 'something pretty positive' in North Korea

Pyongyang, North Korea (CNN)NBA Hall of Famer Dennis Rodman told CNN he was hoping to do "something that's pretty positive," before he boarded a plane bound for North Korea.

The eccentric former basketball player arrived in Pyongyang Tuesday afternoon for an anticipated four-night visit. The trip comes at a time of heightened tension between Washington and Pyongyang.
Four Americans are currently being detained in North Korea. When asked if he planned to raise their detention with North Korean officials, Rodman said: "Well that's not my purpose right now... My purpose is to go over there and try to see if I can keep bringing sports to North Korea."
Rodman, a former contestant on Donald Trump's pre-presidency reality TV show "Celebrity Apprentice, "is one of the few Americans to have met current North Korean Supreme Leader Kim Jong Un.
First photo: Dennis Rodman arrives in North Korea for the 5th time. He wouldn't tell me if he's spoken to Trump or anyone from the US gov't. pic.twitter.com/aeEvEhkNwD

— Will Ripley (@willripleyCNN) June 13, 2017
Rodman promoted his past visits as a form of informal "basketball diplomacy," using sports and as a way to bridge divides, said Daniel Pinkston, a professor of International Relations at Troy University in Seoul.
"We all have specialties, but Dennis does have a view about human beings and the natural state of affairs ... his view seems to me is that if people will talk and interact and if there's dialogue and exchanges and interactions, this process will naturally lead to de-escalation," Pinkston told CNN.
Surrounded by media at Beijing airport, Rodman didn't respond to CNN's questions about whether he would be meeting Kim during this trip, and wouldn't say if he was delivering a message from the US President to Pyongyang.
When asked if he had spoken to Trump at all, Rodman said, "I'm pretty sure he's happy at the fact that I'm over here trying to accomplish something that we both need."
What that is exactly is unclear but at Beijing's airport on Monday and Tuesday, Rodman was wearing a black T-shirt with the logo of Potcoin -- a digital currency for the cannabis industry, according to its website.
RELATED: Potcoin stock rising after Rodman sponsorship
Rodman later tweeted: "I'm back! Thanks to my sponsor."
I'm back! Thanks to my sponsor Potcoin Home - PotCoin - Banking for the Cannabis Industry. [HASHTAG]#NorthKorea[/HASHTAG] [HASHTAG]#PeaceAndLove[/HASHTAG] I'm back! Thanks to my sponsor www.PotCoin.com.

— Dennis Rodman (@dennisrodman) June 13, 2017
Basketball diplomacy
Rodman has visited the country at least four times, with three of the visits taking place between 2013 and 2014. A senior US official said the State Department was aware Rodman was planning to travel to North Korea, but stressed he is not there in any official capacity.
His last visit came in January 2014, when Rodman and a group of other former NBA players took part in an exhibition basketball game. It was supposedly a birthday gift for Kim who's said to be a big basketball fan.
Rodman was filmed leading a sing-along of "Happy Birthday" to the North Korean leader, a man he calls a friend and a "very good guy," but is widely seen as a brutal dictator who once lauded the execution of his own uncle.
Rodman defended the trip for Kim's birthday in a CNN interview saying it was a "great idea for the world." 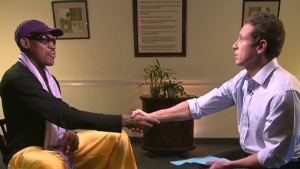 Rodman: I'd trade places with Kenneth Bae 00:48
"I'm sorry for what's going on in North Korea, the certain situations," Rodman told CNN after returning from Pyongyang in 2014, but he didn't specify what exactly those "situations" were and wasn't contrite about the visit itself.
That trip generated a string of negative headlines and an outburst from Rodman during the CNN interview. He was heavily criticized in the US for not bringing up the case of Kenneth Bae, an American imprisoned on charges of "hostile acts" who spent 735 days in North Korean custody before being released in 2014.
Soviet-style prison camps[/paste:font]
Rodman maintained then that he wasn't a diplomat, and it wasn't his job to talk about Bae. But once he was released, Bae thanked Rodman for the rant on CNN, claiming it brought attention to his case.
The former basketball star was also accused of ignoring North Korea's human rights record. Pyongyang has reportedly imprisoned more than 100,000 of its own people in draconian, Soviet-style prison camps and spends millions on its military programs instead of its impoverished population. 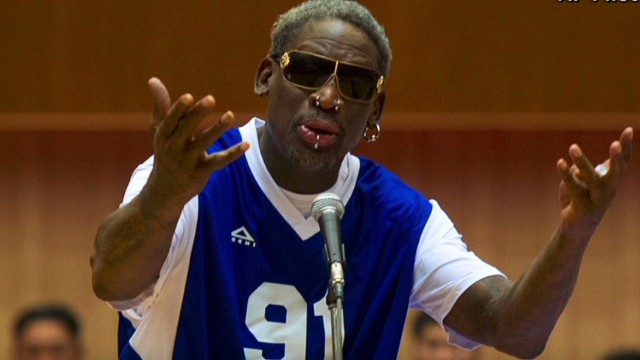 Dennis Rodman: 'I am not a traitor' 00:53
Before entering politics, Trump praised one of Rodman's 2013 trips to North Korea in an interview with Fox News. Rodman, who appeared on Trump's reality TV show in 2009 and again in 2013, went on to endorse Trump's candidacy in 2015.
But relations between Pyongyang and Washington were considerably less tense in 2013 than they have been in recent months.
North Korea has conducted 10 missile tests this year. Experts say each launch gets the country closer to its stated goal of developing a nuclear-armed weapon capable of reaching the United States.
North Korea believes its missile program is the only way to deter Washington from trying to overthrow the Kim regime. 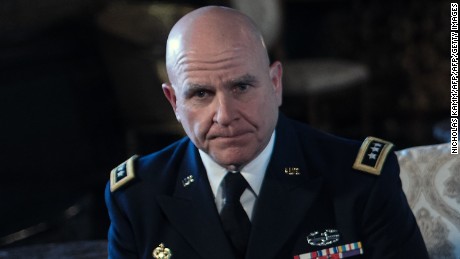 denied that charge last month, saying the US is only seeking denuclearization, but the Trump White House has publicly abandoned the Obama-era strategy of strategic patience.
Trump weighed in on Twitter last month that North Korea is "looking for trouble" and urged China to help. "If not, we will solve the problem without them! U.S.A." he added.

'The Worm' and the dictator
Kim's passion for basketball was likely inherited from his father, Kim Jong Il, and has been a rare area of common ground for the two nations.
Americans detained in North Korea
Currently held:

• Kim Dong Chul, the president of a company involved in international trade and hotel services, was arrested in 2015 and is serving 10 years on espionage charges.

• Otto Warmbier, a University of Virginia student, was sentenced to 15 years of hard labor in 2016 for removing a political sign.

• Kim Sang Duk, also known as Tony Kim, a university professor, was detained in Pyongyang in 2017 and accused of attempting to overthrow the government.

• Kim Hak-song, a native Korean born in China (Jin Xue Song is the Chinese version of his name) and professor working at the same university as Tony Kim was detained May 6 on suspicion of "hostile acts" against the regime.

Madeleine Albright, the US Secretary of State under President Bill Clinton, brought the older Kim a basketball autographed by Michael Jordan during a visit in 2000.
Nicknamed "the Worm," Rodman won two championships with the Detroit Pistons and three with the Chicago Bulls. On the court he was known for his ferocious defense and rebounding ability. But he grabbed just as much attention off the court for his piercings, brightly-dyed hair and headline-grabbing antics.
On his first trip to North Korea, Rodman was accompanied by members of the Harlem Globetrotters and a crew from VICE News.
RELATED: Dennis Rodman Fast Facts
"I come in peace. I love the people of North Korea!" Rodman said on Twitter as he arrived.
The group traveled for a basketball exhibition that pitted the Americans against North Koreans.
Though the game ended in a 110-110 tie, all eyes were on the jarring sight of the rebellious 6-foot-7 ball player sitting next to the the short, clean-cut dictator in a Mao suit. Rodman told Kim he has a "friend for life."
The purposes of Rodman's visits to North Korea have never been fully transparent. He's claimed some were about trying to use basketball to bridge the divide between the two countries. But another was "strictly about the game and for the love of basketball."
CNN's Tim Schwarz, Steve Forrest, Elise Labott and Nicole Gaouette contributed to this report

yeah kwa hiyo wakorea wawe makini
You must log in or register to reply here.