The Ministry of Natural Resources and Tourism has locked out about 85 percent of foreign hunting firms even as 14 hunting blocks remain vacant.
Current official information on the state of tourism hunting in the country says that only nine foreign firms, equivalent to 15 per cent of all block allocations have allocated hunting blocks valid from 2013 to 2018, locking out 51 other applicants.
About 50 local hunting firms or 85 per cent of the total allocations have since been substituted for the alien companies, ministerial spokesman George Mwita writes in a well circulated ministerial document. 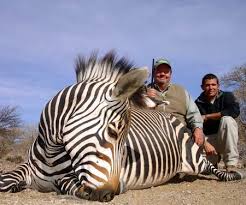 As it stands now, 51 commercial hunting firms with 75 percent foreign shareholdings and 25 others owned by local investors, shall be winding down their activities, the write up noted.
At present about 159 hunting blocks are available in the country, with 145 allocated with investors for the coming five year phase, while 14 others are yet to be allocated local or foreign investors. "We are looking for ways and means of improving the 14 hunting blocks that didnt get investors, the ministerial official noted in a telephone interview.
The vacant hunting blocks have shortages of wildlife resources due to encroachment by other economic activities, deemed incompatible with conservation and commercial hunting use, informed sources indicated.
There are 13 firms owning more than one hunting block, with some reportedly holding up to five blocks depending on their applications, the sources noted.
The ministry says that priority was given to companies with remarkable tax paying records, support for anti-poaching efforts, along with improvement of infrastructure, valuing corporate social responsibility and promoting the country in US and European tourism markets.
Foreign Minister Bernard Membe said at a recent press conference that the wildlife law is detrimental even to local investors who purchased a 25 percent stake in the ousted foreign firms.
Matiko though defended the 2009 Wildlife Conservation Act, saying it is intended to afford Tanzanians with greater opportunities to improve their lives by playing a significant role in wildlife utilization. For instance, section 39 subsection (3) of the said act empowers the minister to order foreign hunting outfits to cede 25 percent of their subscribed shares to local operators.
Membe said it was illogical to force foreign companies to cede chares to Tanzanians while there is not guarantee of getting hunting blocks even after such a change has been effected. The law further provides that the percentage of foreign-owned companies allocated hunting blocks shall not exceed 15 percent of the total hunting companies at any particular time. Nyaga Mawalla, Tumaini University law lecturer interested in wildlife, corporate and land laws in the country, says that the WC Act of 2009 is contrary to the spirit of investment guarantees offered to investors under the Tanzania Investment Act of 1997 and the Constitution of United Republic.
Most of these companies had applied under the Tanzania Investment Act number 26 of 1997 and, therefore, they are bonafide investors, and they enjoy investment guarantees, including a predictable investment climate, Mawalla said.
The TIC Act section 22 (b) provides that no person who owns, whether wholly or in part, the capital of any business enterprise, shall be compelled by law to cede his interest in the capital to any other person.
The don who is also an advocate of the High Court cited the WC Act of 2009 section 39 subsection (3) as absolutely infringing the TIC Act number 26 section 22 (b), he pointed out. He further faulted the WC Act provision that provides that foreign-owned companies allocated hunting blocks shall not exceed 15 percent of the total hunting firms at any particular time, saying it breaches the constitution.
He argued that the law is discriminative, because it locks out foreigners and their local partners who bought 25 percent shares from the foreign companies as required by the same law. The Constitution of the United Republic of Tanzania of 1977, bill of rights, part 3, which provides for basic rights and duties, Article 12 (1) provides that all persons are equal before the law and are entitled, without any discrimination, to protection and equality before the law, Mawalla emphasized.
Sub-article 2 of the same article provides that: No law enacted by any authority in the United Republic shall make any provision that is discriminatory either of itself or in its effect.
Mawalla explains that sub-article 5 of the same provides against "discriminating means to satisfy the needs, rights, or other requirements of different persons on the basis of their nationality, tribe, and place of origin, political opinion, color, religion, sex, or station in life..."
But the WC Act No. 5 of 2009, favors hunting firms owned in majority by Tanzanians, discriminating those Tanzanians who purchased 25 percent shares of the foreign firms, the don said.
The dean of Faculty of Law at Makumira University College, Elifuraha Laltaika says: "Our economy is natural resource base-dependent; we are not an industrialized country. We depend on wildlife, forests and minerals. We need to have laws that can facilitate sustainable consumptive use of our natural resources for the country's development, otherwise the government will be reduced into a beggar for donor funds to realize its obligations of bringing about economic development.
Laltaika says Tanzania's legal and policy framework relating to wildlife conservation is that of sustainable consumptive use, meaning that is some protected areas, wildlife can be hunted in order to generate income. That is why there are hunting blocks or concessions. The fact that the government could not allocate all blocks while it terminated contracts of some investors negates the very policy statement of consumptive use, he stated.
The environmental lawyer says the government should be vigilant in its regulatory role and make sure that there is a conducive legal and policy framework relating to the sustainable use of natural resources for the country's development.
Ezekiel Maige, the minister for Natural Resources and Tourism, says that Tanzania's hunting industry, a sleeping economic giant, will be contributing an extra $30 million to the economy per annum starting 2013, on account of the new hunting rules.
The highly-lucrative sector is expected to bring in $53 million, up from $20 million, a 37.7 percent increase, cementing its position as one of Tanzania's largest foreign exchange earners, the minister maintains, keen to see the hunting industry make a more realistic contribution to national economic growth.
Banking on the new hunting rules, Maige is optimistic the industry will hit the $52.787 million mark annually during the 2013-2018 hunting seasons, about $30 million more than the current $19.795 million level obtained.
SOURCE: GUARDIAN
You must log in or register to reply here.