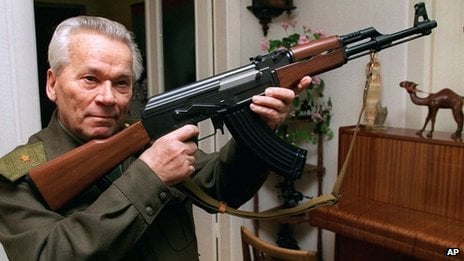 Although created to defend Russia's borders, the Kalashnikov also became an icon in the hands of militants and insurgents around the globe.

The inventor of the Kalashnikov assault rifle, Mikhail Kalashnikov, has died aged 94, Russian officials say.
The automatic rifle he designed became one of the world's most familiar and widely used weapons.
Its comparative simplicity made it cheap to manufacture, as well as reliable and easy to maintain.
Although honoured by the state, Kalashnikov made little money from his gun. He once said he would have been better off designing a lawn mower.
Kalashnikov was admitted to hospital with internal bleeding in November.
Continue reading the main story&#8203;Mikhail Kalashnikov's 1947 design became the standard equipment of the Soviet and Warsaw pact armies. Versions were manufactured in several other countries, including China.
With its distinctive curved magazine, the Kalashnikov became a revolutionary icon in the hands of militants and insurgents around the globe.
When I met him in Paris, he proudly wore the insignia of a Hero of Socialist Labour on his jacket. He seemed perplexed at the extraordinary changes that had engulfed his country.
He was sensitive to any criticism that his gun had caused countless casualties around the world. He told me he had simply designed the rifle to defend the Soviet Union. The uses to which it had been put elsewhere were nothing to do with him, he said.
The Kalashnikov - which is still widely used today - will go down in history. If the name of Samuel Colt and his revolver is associated with the 19th Century, then the gun of the 20th Century is undoubtedly the Kalashnikov.

He died on Monday in Izhevsk, the city where he lived 600 miles east of Moscow, an official there said.
Matching the GermansMikhail Timofeyevich Kalashnikov was born on 10 November 1919 in western Siberia, one of 18 children.
In 1938, he was called up by the Red Army and his design skills were used to improve the effectiveness of weapons and equipment used by Soviet tank regiments.
He designed the machine gun after being asked by a fellow soldier why the Russians could not come up with a gun that would match the ones used by the Germans.
Work on the AK47 was completed in 1947, and two years later the gun was adopted by the Soviet army.
Kalashnikov continued working into his late 80s as chief designer at the Izhevsk firm that first built the AK-47.
He received many state honours, including the Order of Lenin and the Hero of Socialist Labour.
Kalashnikov refused to accept responsibility for the many people killed by his weapon, blaming the policies of other countries that acquired it.
However, pride in his invention was tempered with sadness at its use by criminals and child soldiers.
"It is painful for me to see when criminal elements of all kinds fire from my weapon," Kalashnikov said in 2008.

RIP Kalashnikov: 20 facts you may not have known about AK-47 and its creator.


1. Mikhail Kalashnikov, who was a tank commander during World War II, began his career as a weapons designer after a shoulder injury during the Battle of Bryansk. While in hospital in 1942, he overheard wounded soldiers complaining about Soviet rifles and decided to change that. 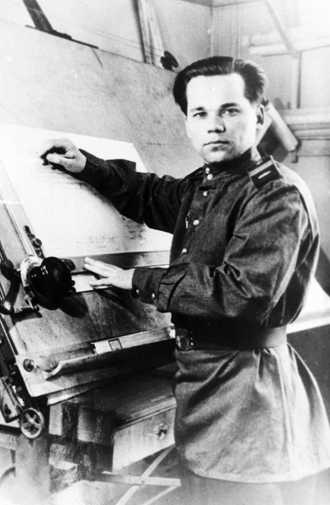 2. The first Kalashnikov rifle was produced in 1947, bringing its creator the Stalin Prize and the Order of the Red Star. The AK-47 has been the standard issue assault rifle of the Soviet and then Russian army since 1949.

3. Durability, low production cost, availability and ease of use are the features, which assured AK-47 global success. Kalashnikovs creation performs in sandy or wet conditions that jam more sophisticated weapons. The designer called it a symbol of the creative genius of the Russian people.

4. The AK-47 has made it into the Guinness Book of Records as the most widely spread weapon in the world, with 100 million Kalashnikov rifles currently in use.

5. Military and special forces in 106 countries around the globe from Afghanistan to Zimbabwe are now armed with AK-47s.

6. Russia not only distributes the Kalashnikov rifles all over the world, but also licensed its production in over 30 other countries, including China, Israel, India, Egypt and Nigeria.

7. It is believed that AK-47s have caused more deaths than artillery fire, airstrikes and rocket attacks combined. An estimated quarter of a million people are gunned down by bullets from Kalashnikovs every year.

8. But Mikhail Kalashnikov himself never experienced self-reproach about the blood spilled with the help of his invention as he created AK-47 for protection. I sleep well. Its the politicians, who are to blame for failing to come to an agreement and resorting to violence, he said in 2007. 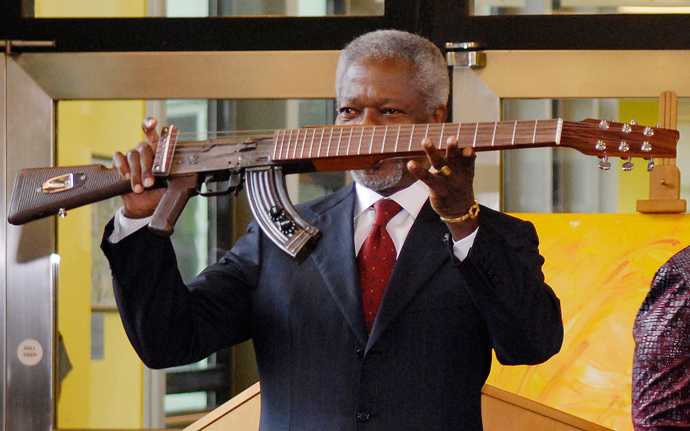 
9. Relative cheapness has always been one of the most important advantages of AK-47. The average global price of the assault rifle was estimated at $534 in 2005, according to Oxford University economist Phillip Killicoat. Though in African countries the price of AK-47 is on average $200 cheaper.

10. Osama bin Laden always had a Kalashnikov rifle with him during his video appearances. According to some reports, it was the US, which gave the Al Qaeda founder his first AK-47 to fight the Soviets in Afghanistan. 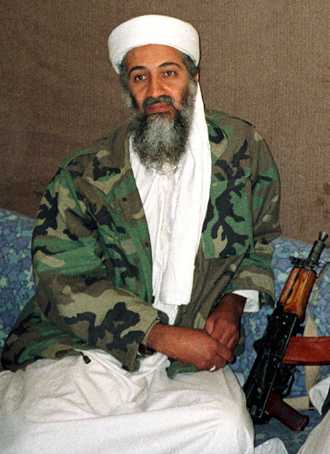 11. During the Vietnam War, many American soldiers gave up their M16s for the more reliable Kalashnikov rifles, which they picked up from dead enemies. Even now, the US marines carry AK-47 magazines with them because of how common the weapon is.

12. The image of AK-47 appears on the flag of Mozambique as well as coats of arms of Zimbabwe, Burkina Faso (1984-97) and East Timor. The Kalashnikov rifle is also present on the flag of Lebanese militant organization, Hezbollah.

13. The parents in some African states name their babies Kalash, which is another nickname for the Kalashnikov assault rifle, according to a documentary by Russias Channel One.

14. Russias top basketball player, Andrey Kirilenko, born in the city of Izhevsk, which hosts the Kalashnikov rifle factory, has played under No.47 in the NBA and was nicknamed AK-47.

15. Egypt has immortalized the AK-47 by erecting a giant monument, portraying a barrel and bayonet of a Kalashnikov rifle at the Sinai Peninsula.

16. A gold coated Kalashnikov assault rifle was recovered by US troops from the weapon collection of former Iraqi leader, Saddam Hussein.

17. Coins dedicated to Mikhail Kalashnikov and his creation were issued not only in Russia, but also in such a peaceful place as New Zealand, which marked the rifles 60th birthday with special two-dollar pieces. They came in cases shaped after the AK-47 magazine. 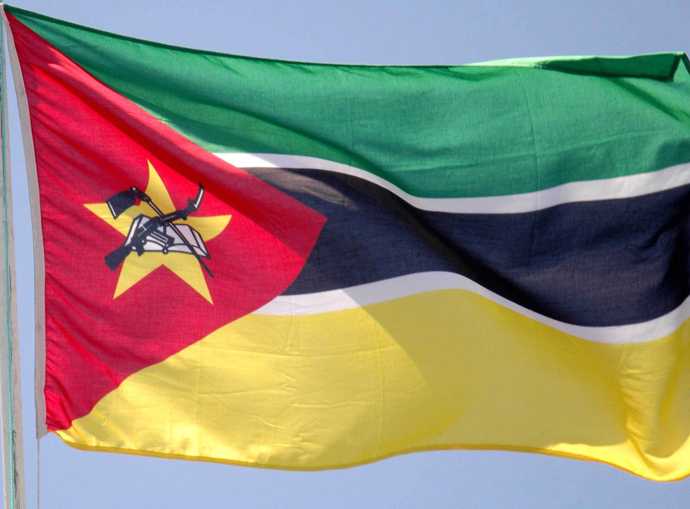 
18. French newspaper, Liberation, has named AK-47 the most important invention of the XX century, with the Russian rifle leaving the atomic bomb and space flight behind.

19. Mixing vodka, absinth, lemon, cinnamon and sugar is the recipe for the Kalashnikov shot drink. Theres also a Kalashnikov vodka brand, which has been sold in bottles resembling the shape of an AK-47 since 2004.

20. Colombian artist, Cesar Lopez, has transformed a dozen of AK-47s into guitars, with then UN General Secretary, Kofi Annan, getting one of the musical instruments as a gift in 2007. 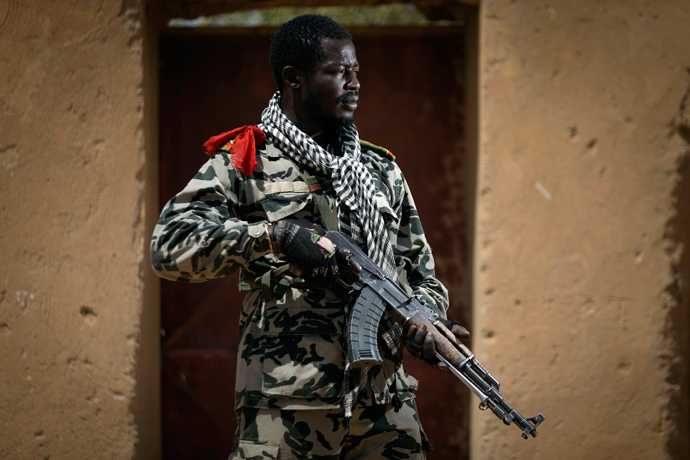