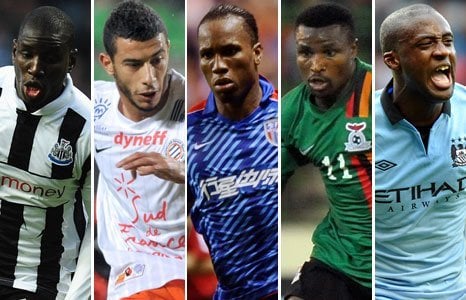 The five candidates for the BBC African Footballer of the Year 2012 award have been revealed.

Yaya Toure has made the shortlist for the second consecutive year and he is joined by his Ivory Coast team-mate Didier Drogba, Senegal's Demba Ba, Morocco's Younes Belhanda and Zambia skipper Christopher Katongo.

The winner will be decided by African football fans, who have until 1830 GMT on Thursday, 13 December to vote for their choice.
You can either vote via this page or by sending an SMS from your phone to +44 7786 20 50 75:

The winner will be announced on Monday, 17 December.

It has been an outstanding year for all the nominees, with four of the players winning silverware.

Drogba could not have bid a better farewell to Chelsea at the end of the season after scoring the winning penalty to clinch the Champions League trophy for the first time in the club's history, and also scoring what proved to be the winning goal in the FA Cup final.

His Ivorian compatriot, Toure, was a key player for Manchester City as the Sky Blues were crowned Premier League champions for the first time - and their first top-flight title for 44 years.

A domestic title was also earned by Belhanda, whose 12 goals and all-round performances were a huge factor as Montpellier pulled off a major surprise to win the French Ligue 1 championship.

On the international scene there was yet another first as Katongo led from the front for Zambia, skippering them to a shock victory in the Africa Cup of Nations, where Chipolopolo beat Ivory Coast on penalties in the final.

Ba fared less well at the Nations Cup, with Senegal going out of the competition at the group stage, but he enjoyed personal success with Newcastle where he ended last season as the club's top scorer with 17 goals, helping them to finish fifth in the table.

Papiss Demba Cisse with that goal of the season should be enough.

Chris Katongo named as BBC African Footballer of the Year 2012 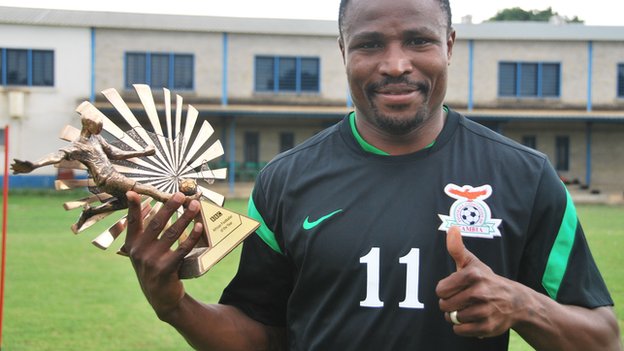 Katongo named 2012 BBC African Footballer of the Year
Christopher Katongo has won the 2012 BBC African Footballer of the Year award.
The 30-year-old Zambia captain beat off competition from Demba Ba, Didier Drogba, Younes Belhanda and Yaya Toure to become the first winner from southern Africa in the history of the award.
Katongo told BBC Sport: "This is a fantastic moment for me. I thank the people who voted for me. It is something I will never forget in my career.
"I did my best and the people have spoken - that's the beauty of this award"
"This means a lot for the young people and the young players who look up to me. I could not have achieved this without the support of my team-mates."
The shortlist for the award was drawn up by football experts from every country in Africa, who based their choices on players' skill, technical ability, teamwork, consistency and fair play.
And a record number of people nominated their favourite online or by text message with just over 40% of the votes going to Katongo, who plays his club football in China for Henan Construction.
While all the players on the shortlist have enjoyed a superb year, with four of the players picking up silverware, it is Katongo whose performances and achievements have been considered by African football fans to be the greatest.
"I think the things that they (the fans) like about me is my discipline and that I am the kind of player who can fail one day but pull up his socks and keep going. I think that is why they voted for me," added Katongo.
"To be among the top players who have won this award, I will go to sleep with a smile on my face.
"I did my best and the people have spoken. That's the beauty of this award."
Katongo, who is also a soldier in his home country, was inspirational as he led Zambia to their first Africa Cup of Nations title in February.
He scored three goals en route to the final of the tournament in Equatorial Guinea and Gabon and then struck a successful penalty in an 8-7 shoot-out victory over favourites Ivory Coast to lift the trophy in Libreville.
It was an emotional moment for Zambia, who had suffered a tragic air disaster 19 years previously, when a plane carrying most of the national team crashed when only 500m offshore from Libreville, killing all 25 passengers and five crew.
Seven months after leading Zambia to glory Katongo was again his country's talisman, this time in a 2013 Nations Cup qualifying tie when he scored the only goal of the game in his side's final-round first leg match against Uganda.
And it proved to be a vital strike as Chipolopolo lost the return leg 1-0 but made it through to next year's tournament in South Africa by winning 9-8 in another penalty shoot-out.
In between those Nations Cup heroics, Katongo also provided the spark that lifted Zambia out of a difficult phase in their 2014 World Cup qualification campaign.
Zambia suffered a 2-0 defeat away to Sudan in Khartoum in June - a result that remains in doubt while Sudan are being investigated for allegedly fielding an ineligible player - and they desperately needed a result against Ghana a week later.
Yet again it was Katongo who stepped up and scored the winner, putting his side's campaign back on track.
And if Katongo can continue the form that has helped his country to new heights, as well as earning him individual recognition, he may well propel Zambia to the biggest stage of all in Brazil in 18 months' time.

All the best Katongo....but they should not make you a general because of football. War is soemthing different

Ndahani said:
All the best Katongo....but they should not make you a general because of football. War is soemthing different
Click to expand...