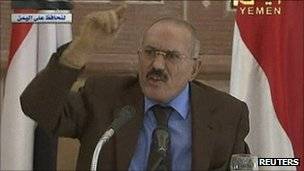 Yemeni President Ali Abdullah Saleh has said that he will step down from power within the "coming days".

Mr Saleh has appeared to be ready to resign several times, but pulled out of deals to stand down at the last moment. He returned to Yemen unexpectedly last month from Saudi Arabia where he had been receiving treatment after his office was shelled in June. He is faced with protests and an insurrection by renegade army units.

He has also repeatedly refused to sign a transition deal brokered by Gulf states, and first presented in March, whereby he would hand over power to his vice-president in return for immunity from prosecution.

But Yemen's deputy information minister told the BBC that Mr Saleh was no longer clinging to power.

'Reject power'
In Mr Saleh's speech, broadcast on state television, he gave no precise date for standing down.

"I reject power and I will continue to reject it, and I will be leaving power in the coming days," he said.

"It's not because I crave power, I reject power and I will leave it in the coming days and leave it behind," Mr Saleh said.

"There are sincere men, whether they be military or civilian," who are capable of governing Yemen, he added.

BBC
You must log in or register to reply here.