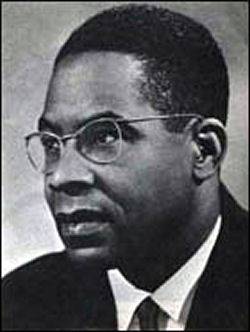 Cesaire passed away in a hospital in Fort-de-France, the capital of the Antilles island of Martinique, after a brief illness.

Born in Basse-Pointe, Martinique, Cesaire travelled to Paris as a young man and there studied at the Ecole Normale Superieure.

In Paris, he created, with Leopold Sedar Senghor and Leon Damas, the literary review L'Etudiant Noir (The Black Student), which marked the beginning of the so-called Negritude movement.

Negritude was a forerunner of the Black Power movement of the 1960s, emphasizing awareness of black heritage, values, and culture, and was used to rally decolonized Africans in the 1950s.

Cesaire moved back to Martinique in 1939 with his wife, fellow Martinican student Suzanne Roussi, and their young son.

He became a teacher at the Lycée Schoelcher in Fort-de-France, where one of his students was Frantz Fanon, who would become a prominent anti-colonialist polemicist and writer.

Cesaire represented Martinique in the French National Assembly from 1946, was mayor of Fort-de-France from 1945 to 1983, and became president of the Martinique Regional Council in 1983.

Originally a Communist, he opposed the Soviet Union's invasion of Hungary in 1956 and left the party to form the Martinique Progressive Party (PPM), which advocated autonomy for the island.

His works include the play The Tragedy of King Christophe (1963) and the poem Notebook of a Return to my Native Land (1939), as well as an adaptation for black theatre of Shakespeare's The Tempest.

In 1983, the University of California Press brought out an edition of his collected poems.

Hivi ndivyo vizingiti vyetu..waanzilishi wa hoja za nguvu
kuhusu uafrika wetu.I will never forget such a kind of people.
You must log in or register to reply here.