Ory Okolloh, the Kenyan founder and executive director of Ushahidi
Click to expand...

This is the obvious question that follows from my blog yesterday which listed Mfonobong Nsehe's selection of Africa's most powerful men under 40.
Nsehe has also compiled a list of 20 powerful African women under age 45.
What do you think about this list?
1) Ory Okolloh Kenyan. Founder, Ushahidi
A Harvard-trained lawyer, activist and blogger, Kenyan-born Ory Okolloh spearheaded the founding of Ushahidi, a revolutionary crowd sourcing utility that enables citizen journalists and eyewitnesses all over the world to report incidences of violence through the web, mobile E-mail, SMS, and Twitter. Earlier this year, Okolloh assumed a new position as Google's policy manager for Africa, and she is widely acknowledged as one of the most influential women in global technology.
2) Chimamanda Adichie Nigerian. Writer
One of Africa's leading contemporary literary voices, the Award-winning Nigerian writer has been heralded as a rebirth of the African literary greats &#8211; the likes of Chinua Achebe, Camara Laye and Cyprian Ekwensi. In 2006 her second novel, Half of a Yellow Sun, won the coveted Orange Prize, and Chinua Achebe (widely regarded as the father of African literature) said of Adichie: She's "endowed with the gift of ancient storytellers&#8230;"
3) Yolanda Cuba South African. Corporate Executive
When Yolanda Cuba was only 29, she was appointed CEO of Mvelaphanda Group, a conglomerate listed on the Johannesburg Stock Exchange. She stepped down last year, but still remains one of South Africa's most respected and sought-after business leaders. She serves on the boards of South African blue-chips like ABSA, Steinhoff and Life Healthcare.
4) Ndidi Nwuneli Nigerian. Social Entrepreneur
Ndidi founded LEAP Africa - a leading nonprofit that provides social entrepreneurs, youth and small scale business owners with leadership training and executive coaching services. She is also a co-founder of AACE Foods, a Nigerian food processor. Ndidi is a leading authority on social entrepreneurship and in 2004 was bestowed with the national honor, Member of the Federal Republic (MFR) by the Nigerian President at the time, Olusegun Obasanjo.
5) Dambisa Moyo Zambian. Economist
The Zambian-born economist and New York Times international best-selling author. Her most recent book is Dead Aid: Why Aid Is Not Working. She is one of Africa's most vocal advocates for the abolition of foreign aid. In March 2011, during the annual Observance ceremony in commemoration of the Commonwealth Day in Westminster Abbey, Moyo addressed an audience of some 2,000 guests including Queen Elizabeth II and British Prime Minister David Cameron. She sits on the board of Barclays Bank, SABMiller and Lundin Petroleum.
6) Khanyi Ndhlomo South African. Media Mogul
One of South Africa's most respected media moguls. She owns Ndalo Media, which publishes Destiny Magazine and Destiny Man, two thriving high-end magazines that combine business and lifestyle content to cater to successful, professional, stylish and intellectually curious men and women.
7) Phuti Malabie South African. CEO, Shanduka Group
In 2008, the Wall Street Journal named Phuti as one of 50 women in the world to watch. In 2007, she was selected by the World Economic Forum as a Global Young Leader. Malabie currently serves as CEO of the Shanduka Group; one of South Africa's largest African black owned and managed investment holding companies.
8) Funmi Iyanda Nigerian. Journalist & Broadcaster
Iyanda is a multi-award-winning journalist, broadcaster and blogger. She is the host of Talk With Funmi, a popular TV show that journeys through Nigeria, from state to state, capturing people and conversations around the country. She is an African Leadership Institute Tutu Fellow and a fellow of the ASPEN Institute's African Leadership Initiative.
9) Isis Nyongo Kenyan. Managing Director, InMobi Africa
Isis Nyongo is the Vice President and Managing Director of InMobi, the world's largest independent mobile advertising network. Prior to her appointment earlier this year, Isis served as the Business Development Manager for Google's operation in Africa. She spearheaded mobile partnerships and played a pivotal role in the development of Google's content strategy in Africa.
10) Bethlehem Tilahun Alemu Ethiopian. Entrepreneur
Ethiopian-born entrepreneur was recently named the &#8216;African Businesswoman of the Year' by African Business Magazine, a leading pan African business magazine. She is the founder of Sole Rebels, a brand of eco-friendly shoes and sandals made in Ethiopia. She was also named a Young Global Leader by the World Economic Forum earlier this year.

11) Elsie Kanza Tanzania. Economic Advisor To Tanzania's President
Kanza is currently an assistant and an economic advisor to Tanzanian President Jakaya Kikwete. She's been selected by the World Economic Forum as a Young Global Leader.
Click to expand...

DO THEY KNOW A VALUE OF A TANZANIA SHILLING SINCE WHEN SHE TOOK OVER 2006
Click to expand...

12) Julie Gichuru Kenyan. Journalist & Broadcaster
One of Kenya's most popular veteran journalists, with 11 years experience in broadcast, print and online media. She is currently an executive of Citizen TV, Kenya, and is a recipient of the Martin Luther King Salute to Greatness Award.
13) Lisa Kropman, South African, Entrepreneur
Lisa Kropman is founder of The Business Place, a group of business centers that support up-and-coming African entrepreneurs in Southern Africa.
14) Stella Kilonzo Kenyan. Chief Executive, Capital Markets Authority, Kenya
Since 2008 Kilonzo, a trained accountant and administrator, has served as the Chief Executive of Kenya's Capital Markets Authority.
15) Magatte Wade Senegal. Entrepreneur
The Senegalese entrepreneur founded Adina World Beat Beverages, a manufacturer of tea, coffee and juice beverages. The company is based in California, and boasted revenues of close to $2.5 million in 2010. Wade is a TED Global Africa Fellow.
16) Jonitha Gugu Msibi South Africa. Senior Partner, Ernst & Young
Gugu Msibi is a Senior Partner at Ernst & Young where she serves as the Public Sector and Government leader in Africa. She is a key adviser to several government leaders in Africa. Was named a Young Global Leader by the World Economic Forum in 2011.
17) June Arunga Kenyan. Entrepreneur
In 2010, Fast Company named June Arunga as one of the 100 most creative people in business. Arunga is the founder and Chief Executive of Open Quest Media, a successful multimedia production company based in New York.
18) Juliet Ehimuan Nigerian. Google country manager, Nigeria
In April Nigerian-born Ehimuan was appointed as Google's country manager for Nigeria. Tough job: As head of Google's operations in Africa's largest internet-user community, she is charged with the responsibility of representing the company in all its business development projects and partnership opportunities in the region.
19) Olga Kimani-Arara Kenyan. Google Country Manager, Kenya
Olga serves as Google's local spokesperson in Kenya and develops strategic partnerships for the company in the region.
20) Saran Kaba Jones Liberian. Founder, Face Africa
A Liberian national, Saran Kaba Jones is the founder of Face Africa, a non-profit organization that provides access to clean and safe drinking water for rural communities in Liberia, using an innovative social enterprise model to fund water projects. Face Africa was launched in 2009, and has provided clean water to thousands of rural Liberians

11) Elsie Kanza Tanzania. Economic Advisor To Tanzanias President
Kanza is currently an assistant and an economic advisor to Tanzanian President Jakaya Kikwete. Shes been selected by the World Economic Forum as a Young Global Leader
Click to expand... 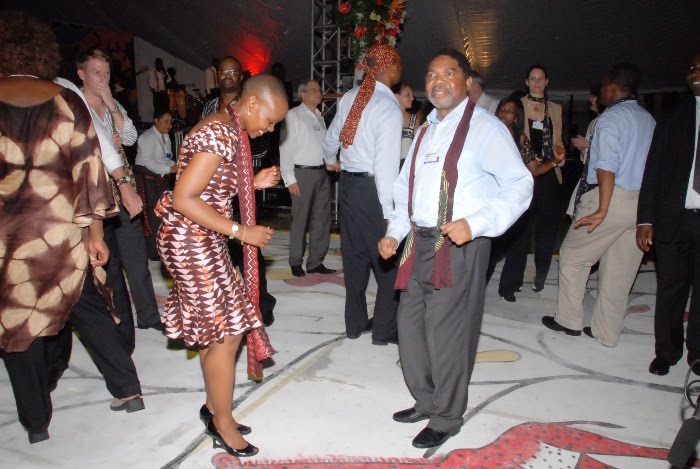 11) Elsie Kanza Tanzania. Economic Advisor To Tanzanias President
Kanza is currently an assistant and an economic advisor to Tanzanian President Jakaya Kikwete. Shes been selected by the World Economic Forum as a Young Global Leader.