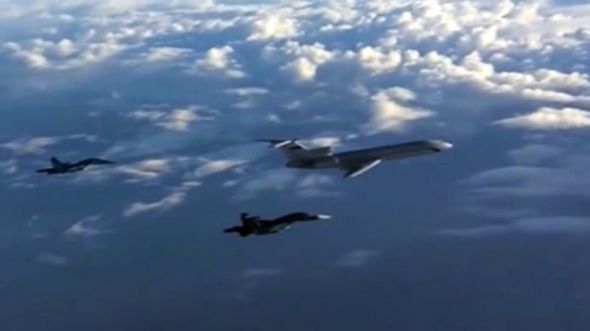 A Russian military plane with 92 people on board has crashed into the Black Sea, Russia's defence ministry says.

The plane disappeared from radar 20 minutes after taking off from the resort of Sochi at 05:20 (02:20 GMT). Fragments have now been found and one body has been retrieved.

The defence ministry said the Tu-154 was carrying service personnel, members of the famed Alexandrov military band, and reporters.

The plane was flying to Latakia, Syria.

The flight originated in Moscow and had landed at Adler airport in Sochi for refuelling.

The defence ministry said in a statement: "Fragments of the Tu-154 plane of the Russian defence ministry were found 1.5km (one mile) from the Black Sea coast of the city of Sochi at a depth of 50 to 70 metres."

So far no survivors have been found, local rescuers told the Interfax news agency.

Defence ministry spokesperson Igor Konashenkov confirmed that the "body of a person killed as a result the crash... was found 6km off the coast of Sochi".

Who are the Alexandrov Ensemble?

Reports in the area said flying conditions were favourable. An investigation has been launched to determine whether any violations of air transport safety regulations had taken place.

Mr Konashenkov said the plane was carrying passengers to a New Year's performance for Russian troops deployed in Syria.

The performance was scheduled to take place at Russia's Hmeimim air base, near Latakia.

Russia has been carrying out air strikes in support of Syrian government forces who are battling rebels opposed to Syrian President Bashar al-Assad.

A Tu-154, operated by Siberian Airlines, was shot down over the Black Sea in October 2001, killing 78 people.

The plane was travelling from Tel Aviv in Israel to Novosibirsk in Russia, and most of the passengers were Israeli.

The Ukrainian military initially denied involvement but officials later admitted the plane could have been hit accidentally during a training exercise.

Pole yao.
You must log in or register to reply here.

The situation between the US/NATO and Russia has become critical, WW III could start any time