By David McKenzie, CNN
Nairobi, Kenya (CNN) -- A Kenyan police officer killed 10 people during a shooting rampage in a small town northeast of the capital, local authorities said Sunday.
The officer assigned to guarding the district commissioner left his post at 3 a.m. to look for his girlfriend, according to a local journalist at the scene.
The officer, Peter Karanja, walked into several bars and allegedly shot customers and employees, including two off-duty officers.
Witnesses said after his rifle ran out of bullets, he walked to the nearest police station and turned himself in.
Several hundred people gathered outside the police station where Karanja was held and threatened to burn it down.
The shooting occurred in Siakago, about 90 miles northeast of Nairobi.
The suspect has been transferred to the provincial police headquarters for his safety. 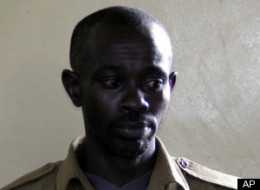 NAIROBI, Kenya -- A police officer who said he was looking for a woman who infected him with HIV rampaged through three bars in a central Kenyan town and killed 10 people, including two fellow officers, officials said Sunday.

The suspect, who is in his 30s, went out Saturday night looking for a female friend but couldn't find her, said John Chelimo, the district commissioner. The officer is in police custody, he said.

"The man is said to be accusing the girl of having infected him with HIV and when he went to look for her he did not find her," Ochola said. "That for now seems to be the motive behind the killings."


Many townspeople didn't realize what was happening because they mistook the gunfire for fireworks, said Antonin Newite, a local radio reporter. Many Hindus in Kenya were celebrating the festival of Diwali on Saturday.

The killings sparked a mass protest in front of the Siakago police station early Sunday, said Nyaga Manunga, whose daughter was one of those killed. He said the shootings took place very close to the police station.

"In Siakago there is no security," Manunga said. "Someone can't just shoot 20 to 30 bullets without any reaction from the police."

I thought halloween had passed...and now this?!!! Was it a full moon night?

What did he hope to gain anyway? I once heard of someone who stabbed his galfriend 21 times for allegedly ambukizaring him with HIV. then there are those who stick to each other no matter who brings the HIV in the relationship.
GOd help us!!! Theres always a loose cannon out there.

Kenyans clash with Tanzanian police after businessman is abducted.
9 10 11