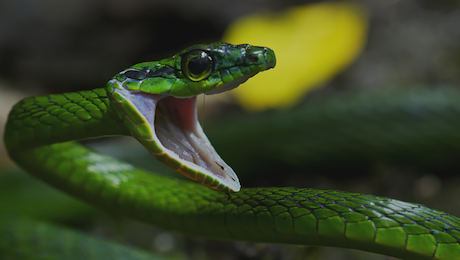 From the turbulent reefs of the Pacific Ocean, to the sun-bleached sands of the Caribbean Sea, ‘Colombia’s Wild Coast’ takes us on a trans-oceanic tour to two islands off the South American continent. Nestled oceans apart, evolution has bestowed to the islands a huge diversity of fascinating creatures, making their home in some of the most unique habitats on Earth.

Gorgona, a remote Colombian island, has a dark secret. It’s a natural fortress, surrounded by shark-infested seas, blanketed in impenetrable jungle and teaming with deadly snakes. For that reason it was chosen by the Colombian government as the site of a high security prison, Colombia’s own Alcatraz. In 1959 it began housing the nation’s most notorious criminals.

It was modelled on Nazi concentration camps and claims of human rights abuse were rife. Murders within its walls were common. For twenty-five years it was a living hell for the two and a half thousand inmates who did time there. Today, 30 years after the prison was abandoned, the deadly threats are still there, but now protected as part of a national park.

The jungle is slowly reclaiming the prison ruins. In its heyday, prisoners must have dreamt of escape from the dreadful place, though few were ever successful. If they had managed to get past the guards and scaled the prison walls they would have faced one natural danger after another, from venomous snakes, to caiman and even tropical diseases. Even if they made it to the coast, they would have to overcome the perils of the shallows, the haunt of tiger sharks, and further offshore the boat-wrecking, razor-sharp, coral reef. But to imagine their fearful journey could lead to an exploration of a remarkable island teaming with spectacular wildlife.

Through the eyes a convict on the run we see capuchins monkeys that might have lead the escapee to fresh fruit, a fer-de-lance, the continent’s most dangerous snake, a huge boa hunting rats that scurry behind prison walls, sea birds that would have provoked envy with their effortless ability to glide away from the island. The story of snakes, crabs, frogs, sloths and monkeys, is the real story of life on Gorgona, the snake prison island.