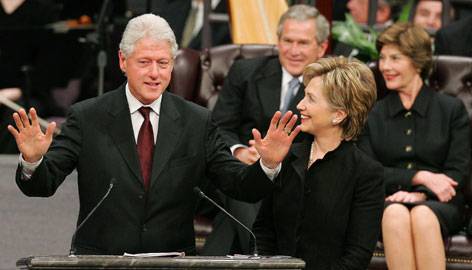 WASHINGTON  Forty percent of Americans have never lived when there wasn't a Bush or a Clinton in the White House.
With Hillary Rodham Clinton hoping to tack another four or eight "Clinton" years on to the Bush-Clinton-Bush presidential pattern that already has held sway for two decades, talk of Bush-Clinton fatigue is increasingly cropping up in the national political debate.

The dominance of the two families in U.S. presidential politics is unprecedented. (The closest comparisons are the father-son presidencies of John Adams and John Quincy Adams, whose single terms were separated by 24 years, and the presidencies of fifth cousins Theodore Roosevelt and Franklin Roosevelt, whose collective 20 years as president were separated by a quarter-century.)

"We now have a younger generation and middle-age generation who are going to think about national politics through the Bush-Clinton prism," said Princeton University political historian Julian Zelizer, 37, whose first chance to vote for president was 1988, the year the first President Bush was elected. And as for the question of fatigue, Zelizer added: "It's not just that we've heard their names a lot, but we've had a lot of problems with their names."

And now, if Hillary Clinton were to be elected and re-elected, the nation could go 28 years in a row with the same two families governing the country. Add the elder Bush's terms as vice president, and that would be 36 years straight with a Bush or Clinton in the White House.

Already, for 116 million Americans, there has never been a time when there wasn't a Bush or Clinton in the White House, either as president or vice president.

Does a nation of 303 million people really have only two families qualified to run the show?

David Gergen, director of Harvard University's Center for Public Leadership and an adviser to presidents Nixon, Ford, Reagan and Clinton, said there does seem to be concern about the possibility of giving "the two dynasties" another four or eight years.

"I think we would be fundamentally healthier if we broadened the zone of candidates who could make it to the top," he said.

Historically, politics has been open to newcomers who rise up to reflect the grass-roots sentiment of the country, Gergen said.

That's still possible, he said, "but it's harder than it used to be, especially because it's so hard to raise money" for expensive national campaigns.

The Clintons and Bushes, he said, have built up strong "brand" recognition for their names  just as the Kennedys did in an age of promise cut short by assassination  making it harder for newcomers to compete.

But sometimes, people just want to try something new.

An NBC/Wall Street Journal poll taken over the summer found that fully one-quarter of all Americans said that the prospect of having at least 24 straight years of a President Clinton or Bush would be a consideration in their vote for president in 2008.

Even among Democrats, 17% said it would be a consideration. That compared with a third of all Republicans.

The nation has changed dramatically since the first Bush claimed the Oval Office in 1988: Then, the Soviet Union was exploring the notion of perestroika, a public Internet was a promise waiting to be fulfilled, gasoline cost about $1 a gallon and Hillary Clinton was an associate still hoping to make partner at the Rose Law Firm in Little Rock

Clinton, now a two-term senator at age 59, has been asked about the long-standing Bush-Clinton grip on the Oval Office at two Democratic debates, and has a two-part response. She dumps on the Bush part of the historical equation and praises the Clinton component.

Asked in the CNN/YouTube debate in July whether adding another President Clinton to the Bush-Clinton-Bush sequence would bring about real change, Clinton had a ready comeback.

When the question came up again in this week's debate in New Hampshire, she told the audience, "I thought Bill was a pretty good president."

She hastened to add that she's running on her own, and "I'm going to the people on my own."

Gergen said any fatigue factor Clinton faces is "overwhelmed by the positive nostalgia for Bill Clinton among Democrats."

The thought is seconded by Todd Gitlin, a professor at Columbia University's School of Journalism who has written a new book about national politics. He said that while some people are bothered by the dominance of the two families, "right now there is one massive fatigue in America and that is with George Bush. No other fatigue comes close."

But even if the issue is not a problem for Clinton, Gitlin said: "Is it a problem in some large sense that we seem to be alternating dynasties? Yes, I think democracy should be more expansive."

How long could this dynastic dynamic play itself out?

"Keep an eye on their children," Gergen quips.

And, there's always presidential brother Jeb Bush, the former governor of Florida. His oldest son, George P. Bush, is considered likely to carry the family's political tradition into the next generation.