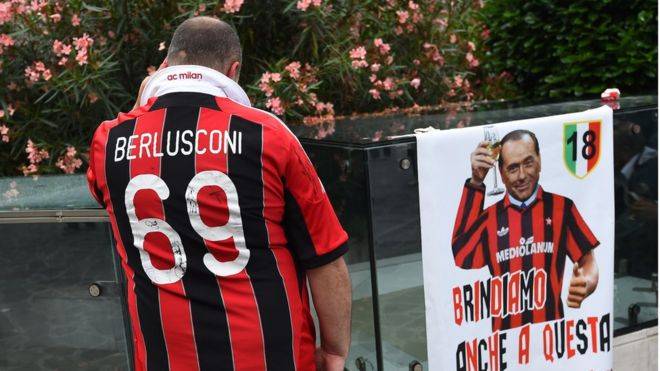 Berlusconi, who owns the Serie A team, made the remarks to local newspapers on Tuesday. He said they will be paying at least €400m (£220m) over the next two years, which may value the club at up to €750m including debt.

"Milan has now embarked on this path towards China," he said without disclosing the identity of the buyers. However other media outlets, citing their own sources, said the terms of the deal are still being finalised.

Berlusconi, 79, has served as prime minister four times but was convicted of tax fraud and bribery. His family holding company Fininvest reportedly entered into exclusive talks with the Chinese investor group in May.

The consortium is looking to buy 80% of the club immediately before eventually taking over the remainder. The deal could even result in the club being listed in China, according to Reuters news agency.

Asian investors
AC Milan is one of Europe's most successful clubs but is seeking new capital to enable it to better compete against other well-funded rivals. It posted a loss of €93.5m ($104m) last year.

Berlusconi came close to selling a majority stake in AC Milan to a Thai businessman last year but changed his mind. Many European teams are now owned or bankrolled by wealthy Asian or Middle Eastern investors or companies.

Source : BBC
You must log in or register to reply here.