Above all, the speedometer doesn’t tell you whether or not you’re going in the right direction. If you suggest to a car driver that you might be on the wrong road, and the response is “then we must go faster”, you might think that’s pretty stupid. Yet this is what happens whenever complaints about the state of the economy elicit a commitment to boost growth.

So what is the right direction for a modern economy? That’s a relatively easy question to answer: when you ask people, they say much the same things. A good economy meets everyone’s basic needs. It means people are healthy and happy with life. It avoids storing up potential sources of long-term trouble, such as extreme inequality and environmental collapse.

It is, of course, entirely possible for an economy to go faster and faster without getting closer to meeting these goals – indeed, while heading in the opposite direction.

Now the trickier part. What would be the economic equivalent of a compass? We need to measure the direction of economic travel in a way that’s comparable to how GDP measures its speed – easy to communicate, and amenable to being influenced by policy decisions.

The New Economics Foundation (NEF), where I was the Executive Director until December 2015, proposed five indicators in an October 2015 report. Imagine them arrayed like dials on a dashboard that you can glance at for an overall picture, as well as study in more detail if you want. Why five? It’s hard to capture everything that matters in one metric, and psychological research demonstrates that people struggle to hold more than five things in their heads at once.

According to UK government figures, 94% of people were in work in 2014 – up nearly two percentage points in four years. However, the NEF calculated that only 61% were in secure jobs paying a living wage – down a similar amount in the same period.

2. Wellbeing. A growing economy is not an end in itself – it’s a means to improving people’s lives. Few would disagree that the ultimate aim of public policy is wellbeing; we care about GDP because we assume it means more wellbeing. So why not also measure wellbeing directly?

The validity of research into measuring wellbeing, by asking people about their life satisfaction, is now widely accepted. Such measures capture a range of things that people care about and that policies can influence – from income and health to housing and social connections.

Some governments do measure life satisfaction, including the UK (it increased from 7.4 to 7.6, on a scale of 0-10, in the four years to 2014). However, it remains at the margins of policymaking.

3. Environment. The NEF propose a national indicator of lifestyle-related carbon emissions, relative to an allocation calculated from global targets for avoiding dangerous levels of climate change.

In four years, the UK’s position deteriorated from using 91% of its allocation to 98%.As climate is a global problem, this indicator is effectively a measure of responsible global citizenship.

4) Fairness. Research increasingly shows that high income inequality has negative social consequences, while casting doubt on the idea that it incentivises hard work.

Comparing the average incomes of the top and bottom 10%, inequality in the UK has been worsening by an average of 0.8% a year for the last four years.

5) Health. The NEF proposes “avoidable deaths” as a simple, easily-understandable measure that captures the quality of health interventions – not only treatment, but also prevention.

Here, the UK shows a positive trend, but with plenty of room for further improvement – the latest figures suggest 23% of deaths need not have happened. 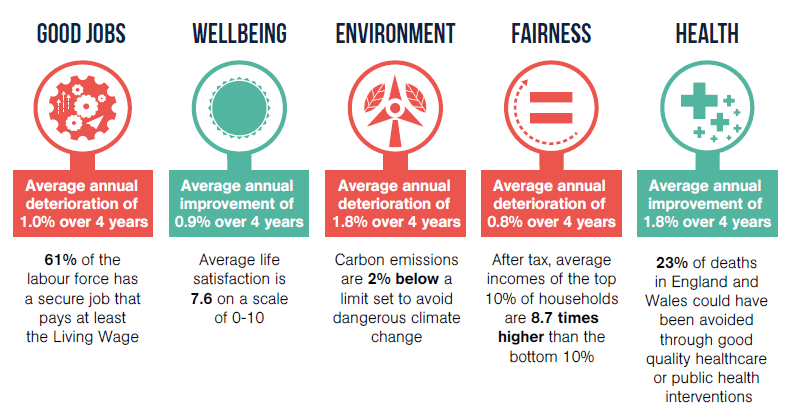 Image: New Economics Foundation (NEF)
The NEF designed these measures with the United Kingdom in mind, working with the UK’s Office of National Statistics. But they are, in principle, just as meaningful for other countries.

The shortcomings of GDP, as a measure of what we want from an economy, are not a new discovery. The NEF and others have been making the case for years. But while various proposals for alternatives have engaged the interest of policymakers and technocrats, they have not yet taken hold among politicians.

That’s understandable: any politician who suggests new ways to judge their performance is also creating new ways to fail, and many policies that will pay long-term dividends on these indicators will also impose short-term costs.

More broadly, there remains a reluctance to move away from viewing economics as a hard, mathematical science, and accept the need to incorporate more of a social science mindset. In effect, we need another value shift in economics, comparable to those that shaped the last century – Kenyesianism and neoliberalism.

However, while the problems with the current economic system are increasingly widely appreciated, we still lack a compelling, coherent, simple alternative narrative. I hope these indicators can help that narrative to develop.

This article is part of our Beyond GDP series. You can read more here.
Posted by Fionnuala Gilsenan

Tuendelee kukumbana kwa hoja
You must log in or register to reply here.