Will a New Port Make Tanzania ‘Africa’s Dubai’?
Backed by money from China and Oman, a small Tanzanian fishing port could be as large and busy as Rotterdam within 10 years.
By Jean-Christophe Servant
TODAY 8:30 AM 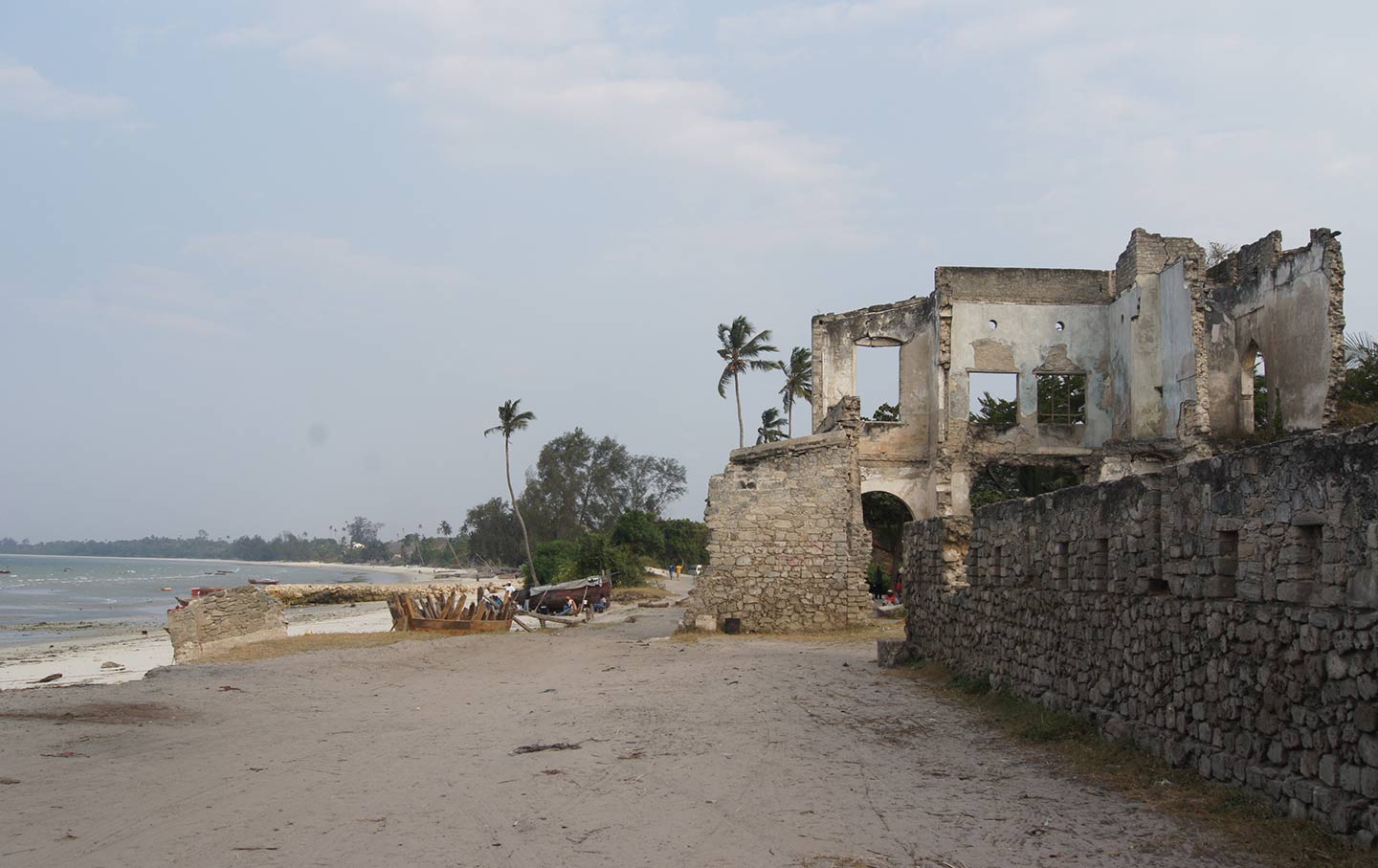 Bagamoyo, a small fishing port about 45 miltes north of Dar es Salaam, Tanzania, may become Africa’s biggest container port in the next 10 years. China’s largest public-port operator, China Merchants Holdings, is about to start what theEcofin Agency called “the most significant construction project in the last four decades of Chinese-Tanzanian relations.”

Part of the $10 billion funding will come from the Sultanate of Oman’s sovereign-wealth fund and China’s Exim Bank. There will be a special economic zone modeled on Shenzhen, China. The piers and docks will extend along 10 miles of coastline, and handle 20 million containers a year, more than Rotterdam, Europe’s biggest port. Tanzanian authorities say it will create an industrial revolution in a mainly rural country where 70 percent still live below the poverty threshold.

Tanzania, a rare example of stability in this region, has been governed by John Magufuli since late 2015. He is the political heir of the Chama Cha Mapinduzi (CCM or the Party of the Revolution), founded in 1977 by Julius Nyerere. According to Daudi Mukangara, a political scientist at the University of Dar es Salaam, the CCM’s original brand of socialism did not withstand “the neoliberal assault of the late 1980s and ’90s, which denationalized the very notion of nationalism.” Tanzania has one of Africa’s strongest growth rates—5.8 percent in 2018, with a forecast of 6 percent in 2019, according to the IMF—and has begun a massive infrastructure-development program.


The Bagamoyo project will let Oman regain a foothold in Africa; the nearby island of Zanzibar was Omani territory from 1698, and a major center of the slave trade supplying the Gulf states. China, too, is extending its influence in East Africa in Tanzania, which has been a pillar of Sino-African cooperation. Until the mid-19th century, Bagamoyo was an important transit point for copra(dried coconut), ivory, and slaves. Many expeditions, including those of Richard Burton and Henry Morton Stanley, set off inland from Bagamoyo, following routes established by Arab slavers. It was also the base for East Africa’s first Catholic mission, and later briefly the capital of German East Africa before the territory passed to the UK. In 1964 Zanzibar was united with Tanganyika, independent since 1961, and the new state elided the two names into Tanzania.

China, a pioneer in Global South relations, is bringing Africa’s globalization full circle in opening the way for Turkish, Egyptian, Indian, and Gulf operators. The new port agreement was made public in March 2013 during the second official visit of China’s President Xi Jinping to Africa; Tanzania was his first stop. No Chinese leader has visited this region as often since Deng Xiaoping launched his open-door policy in 1978.

Nyerere visited China 30 times, and the Soviet Union only once. Charles Sanga, his last personal assistant, remembers that “At the end of his life in 1999, he believed we had only one true friend: China.” Sanga was Tanzania’s ambassador in Beijing at the time of the first Forum on China-Africa Cooperation summit in September 2000, attended by just four African heads of state, including the then–Tanzanian president, Benjamin Mkapa.

China is Africa’s biggest trading partner, ahead of the United States. At the eighth China-Africa summit in Beijing last September, under the “New Silk Roads” banner, China promised $60 billion: Reuters reported that this would be “$15 billion of aid, interest-free loans and concessional loans, a credit line of $20 billion, a $10 billion special fund for China-Africa development and a $5 billion special fund for imports from Africa.”

President Xi said he would not fund any vanity projects: “China’s cooperation with Africa is clearly targeted at the major bottlenecks to development.” In 2000–16, China loaned Africa $125 billion, according to the China Africa Research Initiative in Washington. In 2017 bilateral trade was worth an estimated $180 billion, $75.3 billion of it Chinese imports from Africa. US-African bilateral trade is worth less than $39 billion.


TANZANIA AND THE NEW SILK ROAD
“President Magufuli was elected in 2015 on a program of reclaiming Tanzania’s economic sovereignty from Western investors,” said Rwekaza S Mukandala, former deputy rector of the University of Dar es Salaam; “in his view, China is best placed to help him do this.” Octavian Mshiu, head of the Tanzania Chamber of Commerce, Industry, and Agriculture, agrees. He recognizes Bagamoyo’s strategic role in “enabling Tanzania’s clear integration in the New Silk Road project and making it a bridgehead for Chinese manufacturing businesses relocating to East Africa.” China views Kenya, Tanzania’s rival as a transit country for commodities from East Africa’s landlocked states, as too problematic. It has become a key US ally in Africa, and is unstable, affected by terrorism and tribalism.

As Tanzania’s main trading partner, China has stayed silent on Magufuli’s slide toward authoritarianism, while the United States and other Western nations have become concerned about the erosion of human rights and the threat to development. They have criticized restrictions on press freedom and freedom of assembly, a cyber-crime act that curtails freedom of information, and a statistics act that prevents the publication of any figures not produced by the government.
There has also been criticism of assassination attempts against opponents and the 2017 disappearance of journalist Azory Gwanda.
Magufuli was explicit in November 2018, opening the new Dar es Salaam University library—an elegant building funded by China, alongside the Confucius Institute: “China [is a] true friend who offers help without any conditions. Free things are really expensive.… The only free things that won’t cost you anything are those provided by China.” In 2016, the United States canceled $470 million in funding from the Millennium Challenge Corporation (MCC), a bilateral development fund, over Tanzania’s violations of public freedoms.
Tanzania and neighboring Zambia are focal points in the war of influence being fought in Africa by the planet’s two biggest economies. It’s Beijing consensus versus Washington consensus: aid without conditions, on the margins of international rules of engagement, in the form of trade agreements dictated by China, versus loans from the IMF and the World Bank, with social and political conditions such as privatizations and reductions in public spending.


Donald Trump’s administration now clearly wants to block China, which it accuses of “deliberately and aggressively targeting their investments in the region to gain a competitive advantage over the United States,” as National Security Adviser John Bolton told the Heritage Foundation on December 13. He accused China of resorting to “bribes, opaque agreements, and the strategic use of debt to hold states in Africa captive to Beijing’s wishes and demands.” China is unperturbed by US accusations and has reaffirmed its promise to “contribute to Africa’s development by putting its own development to good use.”

‘ERRATIC AND UNPREDICTABLE’
Bolton mentioned East Africa in his speech on the new US strategy for the continent: Public debt, particularly in Zambia, would leave countries at China’s mercy. That began a war of words between the United States and China. Tanzania, with Ethiopia, Kenya, and Egypt, is officially a country China identified in 2015 for business delocalizations. Magufuli aims to make it a semi-industrialized nation by 2025. He hopes the manufacturing sector will by then generate at least 40 percent of its wealth, not less than 10 percent as it does now.

To finance this program, the government has targeted corruption, misuse of public money, and large-scale theft in the mining industry. Tanzania, Africa’s fourth-biggest gold producer, has altered mining companies’ exploitation contracts, giving the government the right to renegotiate or sever them in instances of proven fraud. The new legislation also does away with mining companies’ right to settle disputes through international arbitration. The tax dispute with Acacia Mining, a subsidiary of the giant London-listed Barrick Gold, which is accused of having understated production for years to save billions in taxes, has ended with an out-of-court agreement with terms and conditions still to be set. Tanzania will receive a 16 percent share in three of Barrick Gold’s mines and 50 percent of the revenue they generate.
https://www.thenation.com/article/left-foreign-policy-china/
Daniel Bessner and Isaac Stone Fish
Magufuli’s blunt style of politics, “as erratic as it is unpredictable” according to a local journalist, initially won support from local young intellectuals. “Then in 2016 the regime began to slide towards authoritarianism,” said former parliamentarian Zitto Kabwe, 42, who leads the Alliance for Change and Transparency (ACT), to the left of the opposition party, Chadema. Kabwe is critical of the patriotic rhetoric of a government that “still hasn’t had an impact on Tanzanians’ daily lives” and believes that Magufuli’s policy, “though it raises the fundamental question of resource ownership, has weakened growth in the mining sector and scared off investors, who are now afraid of having to deal with the Tanzanian justice system.”

ACT’s manifesto, the Tabora Declaration, is inspired by the 1967 Ashura Declaration, which began the policy of Ujamaa (Brotherhood), and aims to lay the foundations of a socialism adapted to 21st-century Tanzania. Kabwe is critical of the World Bank and the IMF, “which imposed the 1998 mining code, which favors multinational extraction companies, and forced us into a debt trap.” China is no better: It is “advancing its pawns in Africa in its own interest.” He warned against falling into anti-Chinese rhetoric that serves Western interests: “Sixty percent of our external public debt is to multilateral organizations such as Bretton Woods and only 10 percent to China.”

Andrew Huang, a tax consultant with a Tanzanian-registered business, is typical of the several thousand Chinese entrepreneurs in the private sector. He’s been here since the late 1990s, and acknowledges that the government’s measures to tackle the mining sector have disheartened some compatriots, who he admits paid no tax: “Showing firmness, as President Magufuli has done, is a good thing for this country.” A flood of Chinese companies is coming, he insists: “Tanzania’s development is just beginning. Because of Bagamoyo, this country will soon be Africa’s Dubai.”