Zimbabwe: The turmoil, reconciliation, and the future! 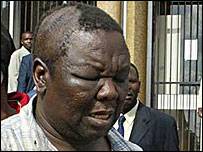 
Tanzania`s Director of Intelligence, Rashid Othman, has held closed-door meetings with top Zimbabwean officials in an attempt to revive an initiative led by retired President Benjamin Mkapa to initiate dialogue between Zimbabwe and Britain.

Mkapa`s proposed mission seemed doomed last year over problems relating to the terms of reference but the Tanzania government, acting on Mkapa`s behalf, recently sent Othman to meet with senior Zimbabwean security officials ahead of a possible visit to Harare by the immediate former President.

Details of the meeting could not be immediately ascertained but the sources suggested that one of Othman`s aims was to seek assurances on Mkapa&#65533;s personal security and to explore common ground on the terms of reference for the talks.

It is believed that President Kikwete, who is thought to be close to President Mugabe, can convince the Zimbabwean leader to allow Mkapa to proceed with the initiative Mugabe himself unveiled in July last year.

Presidents Mugabe and Kikwete discussed the Mkapa initiative on the sidelines of the African Union Summit held in Addis Abba last month.

Zimbabwean presidential spokesman George Charamba was not immediately available to comment on the latest developments but it is understood that a major sticking point of the Mkapa initiative is funding.

A spokesman at the British High Commission in Harare yesterday flatly denied claims by the Zimbabwean government that Britain had refused to come to the negotiating table to repair relations which became strained after President Mugabe`s land reforms.

Joey Bimha, Zimbabwe`s Secretary for Foreign Affairs, told a parliamentary portfolio committee this week that Britain had refused to enter into dialogue with the southern African nation to heal the rift.

`If the other party is not willing to come to the negotiating table, what do you do?`Bimha told MPs.

But Gillian Dare, spokesperson for the British High Commission in Harare, said Zimbabwe had never invited Britain to any talks to improve relations.

`We have not been invited by the Zimbabwean government to talk,` said Dare in a press statement.

Bimha told Parliament that several European countries, which he did not name, had begun to appreciate that the fallout between Harare and London stemmed from a bilateral dispute over land.

However, Dare said: `We maintain diplomatic relations and embassies in each other`s capitals so we can talk to each other whenever needed. There is no bilateral UK/Zimbabwe dispute to be addressed. Our concerns about Zimbabwe are shared by many in the international community.`

`The UK remains a strong advocate of effective, well-managed and pro-poor land reform. The `fast track` land reform has not been implemented in line with these principles and has resulted in the abuse of the rule of law,` he said.

On mugabe issue, hivi mimi wakati wote ninajiuliza why so much noise about mugabe? kwani hakuna mengine mabaya zaidi ya mugabe, like darfur, DRC, ivory coast, why the hell Zimbabwe? kwa sababu wale masettler ni waingereza, and I think thats why the rest of africa is quite.

JK was in Harare to defuse the situation, while meeting the press Mugabe said the west should go to hang themselves.
G

To be honest, whatever that relationship is (labda ueleze mkuu), it wont be affected. Peeps do business in their interest (especially wazungus, I wish we would do the same for national interests). Check this link;
http://observer.guardian.co.uk/world/story/0,,2000349,00.html
Barclays is a british insitution doing business in Zimbabwe. If the British had issues with doing business with Zimbabwe, they could in theory pressure the likes of Barclays. The British/Americans/Europeans (IMF/World Bank) could be passing money to S.A (or even Tanzania...hahaaa, who knows), then Zimbabwe takes a loan from S.A......in reality its business as usual. At the end of the day, with Zim in a mess, those working with Zim at the moment, could have the last laugh in the long run when Zim starts rebuilding. Wazungu wakitaka kumtoa Mugabe, potentially wanaweza, issue ni kwanini hawajafanya? Perhaps wakifanya hivyo nchi nyingi za kiafrika zitakuja juu? We huoni nchi za kiafrika zimetulia kuhusu Zimbabwe?
And as things go, wazungus are becoming more cautious in dealing with african countries, cos there is China as competition.

Amazing though the punchlines Mugabe comes up with. Hebu read the sarcasm on this;
http://www.mg.co.za/articlePage.aspx?articleid=300616&area=/breaking_news/breaking_news__africa/

"We don't have to go to IMF for that, even to any European donor, for what we can do between and amongst ourselves," Mugabe told a business meeting organised in Windhoek by the Namibian Chamber of Commerce and Industry.

"And when we start doing it on our own, you'll see them coming, saying 'Ah, you have a factory here. We want to assist you.' Then, if we want a partner, the partner must come on our terms, because then we will have the capacity to do things on our own."

"When we don't have that capacity, then we are like economic slaves. We go begging. There are still countries in Africa which go begging for money in order to pay their civil servants, and they got independent in the '60s," he said.

Thanks you Lunyungu
You must log in or register to reply here.

In pictures: The life of Robert Mugabe