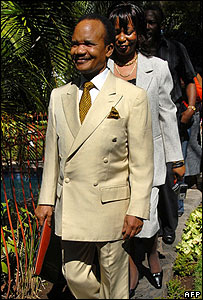 Mr Chiluba's suits were paid
by public funds, a UK judge has said

The Zambian government says it has recovered money and assets worth nearly $60m stolen during the rule of former President Frederick Chiluba.

The assets include bank deposits and an upmarket apartment in Belgium. Information Minister Mike Mulongoti said the assets would be sold and the money used to upgrade hospitals. Mr Mulongoti said the funds were recovered from former government officials who had served in Mr Chiluba's administration.

Mr Chiluba is on trial at the Magistrates Court in Lusaka, charged with corruption. In May last year, the High Court in Britain ruled that Mr Chiluba and four of his aides had conspired to rob Zambia of about $40 million. The civil action was brought in Britain because the allegedly stolen money passed through bank accounts in London. UK Judge Peter Smith said Zambians should know that when the former president appeared wearing his trademark designer clothes, they were paid for with public funds.

Mr Chiluba, who served two terms as Zambia's president from 1991 to 2001, is challenging that verdict. He denounced it is "racist" and "obscene".

His successor, President Levy Mwanawasa, has been pursuing an anti-corruption drive against Mr Chiluba's former government.

The president has offered to pardon Mr Chiluba if he admits the allegations and returns 75% of the cash he allegedly stole, but the ex-leader denies the allegations.
Click to expand...

I congratulate the Zambians. They are assuring everybody that crime does not pay.
They are making an example out of Chiluba.

Soon after President Frederick JT Chiluba swept to power in a landslide election win in 1991, he was heard to remark to close aides: "Power is sweet."

After 10 years in charge, the former bus conductor and trade union leader, continued to enjoy the taste of power.

So much so that he mounted a campaign to change the country's constitution to allow him to run for the presidency a third time.

He was forced to abandon this plan, after massive opposition from within his own ruling Movement for Multi-party Democracy (MMD) and from the Zambian public.

But the move did much to damage the president's personal prestige.

Many Zambians saw it as an attempt to turn the clock back - as well as a betrayal of the democratic principles which he had preached since the beginning of his presidency.

"We don't hate you, Mr President," said one shop assistant as the arguments raged in 2001. "But please just do the right thing, and leave."

When Mr Chiluba was elected, it was amid a atmosphere of elation and euphoria.

His fledgling MMD had trounced the incumbent Kenneth Kaunda and his ruling Unip at the polls.


It was an audacious victory, which sent shockwaves across Africa.

The charismatic Mr Kaunda had held the reins of power since independence in 1964 - much of it under one-party rule.

Although he had been forced by popular discontent to hold elections, when beaten at the polls, he ceded power peacefully.

His successor Frederick Chiluba was hailed as one of a new breed of democratically elected leaders, in a continent where rulers clung on for decades.

The new government set about unshackling the country's collapsing economy from stifling state controls. Guided by the International Monetary Fund and World Bank, it embraced the free-market market with one of the most ambitious liberalisation programmes in Africa.

With its large copper reserves - some of the biggest in the world - and rich agricultural potential, foreign investors started to eye this poor southern Africa nation with interest.

But 10 years on, that optimism had mostly evaporated. Many regarded Mr Chiluba's rule as a disappointment. The promise of the MMD revolution remained unfulfilled.

So what went wrong? For one, despite being promoted as an new-style African leader, Mr Chiluba began to show some decidedly old-fashioned traits.

Within a year-and-a-half, he had sacked independent-minded colleagues from his cabinet, and began to surround himself by "yes" men and women.

Corruption flourished. Some of Mr Chiluba's cronies, it seemed, were more interested with lining their own pockets, than serving their country.

Within a decade, graft seeped into Zambia's way of life.

"Kaunda's men were pickpockets," commented one Zambian journalist. "But Chiluba's lot are thieves."

The government's sell-off of the copper mines - the country's biggest asset - was botched and scandal-ridden.

A parliamentary probe revealed that some of the assets of ZCCM, the mines' company, simply vanished into thin air, while other valuable properties were sold for a song.

In the meantime, the free-market economy failed to deliver.

Despite billions of dollars of international aid since 1991, three-quarters of Zambia's population still live below the World Bank poverty threshold of $1 a day. The much-needed foreign investment to kick-start the economy has not transpired.

A large part of the blame must rest with Mr Chiluba himself. He often seemed more interested in securing his own position, than improving the lot of his people.

His attempts to hound his rival and former president, Mr Kaunda, out of politics in the mid-1990s, tarnished his reputation badly with the international community.

President Levy Mwanawasa says he will pardon Mr Chiluba - if he returns 75% of the money
In 1997, Mr Kaunda was accused of conspiring in failed coup plot and imprisoned.

It took protests from Africa's elder statesmen, Nelson Mandela and Julius Nyerere, to persuade Mr Chiluba to release him.

Then there was the long-running, politically inspired court case, which attempted to strip Zambia's independence leader of his citizenship.

Many saw the hounding of Mr Kaunda as spiteful and malicious, by a leader who felt jealous of the older man's popularity, both with the Zambian people and among fellow African leaders.

Mr Chiluba, himself, cut a curious figure in public life.

He is a "natty" dresser, with a fondness for expensive, monogrammed clothes, and built-up shoes to improve his diminutive height.

A fervent born-again Christian, his private life was the subject of much gossip. In September 2001, he divorced his wife Vera, to whom he had been married for 33 years.

But although Mr Chiluba may not have left office a popular leader, Zambia changed greatly under his tenure, and a lot of it, for the good.

The public opposition to his third term bid showed that Zambians treasured their young democracy, so much so that even in this famously, laid-back country, they were prepared to mobilise to protect it.

Moreover, the freedom of speech allowed under Mr Chiluba would have been unthinkable for much of Mr Kaunda's rule.

There was a lively, free printed media, which relentlessly - and cruelly - lampooned the country's political leadership including Mr Chiluba. Such public mockery of the presidency is unknown in some parts of Africa.

Although the free-market has not delivered prosperity, the consensus among the country's political class - opposition and government - is that it is the only way forward.

The goal is to make Zambia's economy work better, not to return to the days of price controls, and the over-weaning state.

Finally, although Mr Chiluba wanted to stay in power, it is to his credit that he did not use widespread, state-sponsored violence to do so.

Zambians only have to look south, to neighbouring Zimbabwe and President Robert Mugabe, to see what the alternative might have been.

Mr Chiluba - Zambia's second leader since independence - opted to go the other route, leaving office peacefully. For this, Zambians can be thankful.

Chiluba was Zambia's president for 10 years
Ex-Zambian president Frederick Chiluba has hit out angrily after hundreds of his shirts, suits and shoes were seized from a warehouse at the weekend.
The former head of state, with a taste for expensive designer suits, said the raid in Lusaka was a calculated attempt to "disgrace and humiliate" him.

Police suspect the clothes were bought using government funds and believe the ex-president hid them at the warehouse.

But Mr Chiluba said his new home was too small for all his belongings.

"What they have done is to bring my underpants out to the general public," Mr Chiluba told reporters.

Zambians know I have always dressed very well from the 1960s

"It is sad that the fight against corruption is being reduced to discussing suits, shirts, ties and, shoes. Zambians know me and know that I have always dressed very well from the 1960s," he said. "They also want to bring me into ridicule and make the case look like it is similar to [Imelda] Marcos of the Philippines," he added.

The BBC's Musonda Chibamaba says this is the latest of several seizures of properties that the former president has gone through.

Motor vehicles and buildings both in Zambia and Europe have already been seized in the past.

Mr Mwanawasa said that he would grant a presidential pardon to Mr Chiluba if he admitted the allegations of corruption and returned 75% of the cash he allegedly stole.

Chiluba denies all the allegations

In a landmark decision, Zambia's Supreme Court has ruled that parliament acted legally and properly last year in removing the immunity of former president Frederick Chiluba.

This means that Mr Chiluba no longer enjoys protection from the law as guaranteed in the constitution and paves the way for an imminent arrest on charges of corruption.

Mr Chiluba was stripped of his immunity after being accused by his successor, President Levy Mwanawasa, of misusing millions of dollars of government money.

It is the first time such a decision has been made in Zambia and the Commonwealth and it will have massive ramifications for current and future Zambian presidents.

Mr Chiluba denies all the allegations.

There was chaos on the steps of the Supreme Court.

A shell-shocked Mr Chiluba, on the arm of his new wife Regina, had to push his way through a jostling crowd of journalists, well-wishers and detractors to reach his car.

The normally talkative ex-president was speechless, refusing to make any comment on the court's decision until he had a chance to confer with his lawyers about the ruling.

Scores of people waiting outside the courtroom were not so reticent, some calling for his arrest.

As one after another of Mr Chiluba's five appeals points were rejected by Chief Justice Ernest Sakala, the former president tried to put on a brave face.

He smiled a lot but occasionally bowed his head while his wife gave him a reassuring squeeze on the arm.

The chief justice made it clear in the ruling, which lasted almost two hours, that parliament properly exercised its power, and its decision was not outrageous.

Mr Chiluba's arrest on corruption charges is now expected at any time.

The special task force set up to investigate the allegations during Mr Chiluba's 10 years in office has said it has already summoned the ex-president for questioning later on Wednesday.

Mr Chiluba's lawyers told me that he will co-operate and appear if that is what the task force wants.

The question many Zambians are asking is whether Chiluba will fall victim to one of his own retrogressive laws: the non-balliable offence of motor vehicle theft.

This Is Strong Msg To All Our Ex Presidents N Other Leaders, Even Those Who Are In Graves....we Need To Show Even Sign Of Lock In Their Graves..

They Have To Understand That Life Never End On Our Death, But There Is Life Hereafter...

It seems u are unfamiliar with the world of fashion. expensive designer suits can cost anything from 2000 to 50,000 dollars a piece... sasa kama anazo zakutosha kujaza warehouse u do the math.

Chuma said:
This Is Strong Msg To All Our Ex Presidents N Other Leaders, Even Those Who Are In Graves....we Need To Show Even Sign Of Lock In Their Graves..

They Have To Understand That Life Never End On Our Death, But There Is Life Hereafter...