'You're an illegal alien'

Grandmother who's lived in Britain since she was six ​


months old is threatened with deportation​ 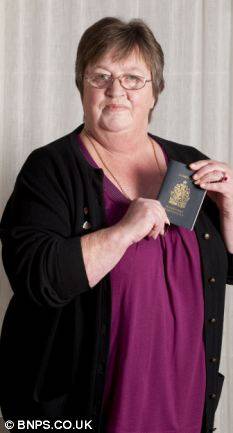 Shock: Joan Wakely faces deportation
even though she's brought up
three children in the UK and pays her taxes
- but she has a Canadian passport ​


A grandmother who has lived in Britain since she was six months old is facing deportation in a bizarre passport dispute. Joan Wakely, 65, has been branded an illegal immigrant, even though she and her husband have brought up three children and two grandchildren in the UK, and she has paid taxes all her working life. She is facing a battle to stay in the country and could be deported in February after officials stopped her at passport control and found no record of her being a British citizen.
Click to expand...

Mrs Wakely, who claims she is British, was born in Vancouver to an English mother and Canadian father, a sailor who returned to his home country after the Second World War.

Six months later the family moved to England and settled in Shaftesbury, Dorset. Mrs Wakely says she assumed her parents had registered her as a British citizen, though she travels abroad on her Canadian passport. She has been to Canada, Israel and across Europe, all without incident. However when she returned to Gatwick airport earlier this year with British husband Mike, after a trip to Florida, she was pulled aside by immigration officials. &#8216;They said there was no record of me and that I was an illegal alien, and stamped my passport to say I have six months left in the country,' she said.


&#8216;I just don't understand how that's possible &#8211; I've paid taxes, have a national insurance number and now draw my pension. &#8216;At first I thought it must be a joke. They treated me like a liar. The woman even looked at my husband and said he could have seen me in America and just brought me over. It's ridiculous.' 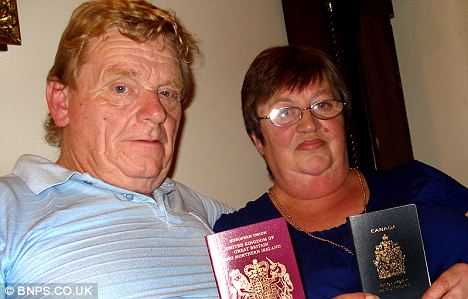 Canadian passport: Joan, with husband Mike,
was born in Canada but moved to Britain before she was a year old
​

In order to remain here permanently Mrs Wakely must pay £840 and pass a test for full UK citizenship, although there is no guarantee her application will be accepted. She has no home or family in Canada, where she would be sent if her application is rejected.


The UK Border Agency said there was a &#8216;clear process' for individuals seeking to become citizens.It said: &#8216;It is the responsibility of everyone seeking entry to the UK to ensure they meet the requirements of our immigration rules. Long residence in the UK is not, on its own, a sufficient qualification to remain here indefinitely.' Mrs Wakely said: &#8216;To be honest, I've never thought about citizenship before &#8211; I've always assumed it was all sorted out.'
Click to expand...

Shamu said:
I will choose Canadian citizens over British citizen.
Click to expand...


Do you mean citizenship?
You must log in or register to reply here.

UK: Sex with someone you don’t live with is illegal from today