Wife of Chinese multimillionaire sues over $200,000 fine for not living in $20M Vancouver mansion

Wife of Chinese multimillionaire sues over $200,000 fine for not living in $20M Vancouver mansion 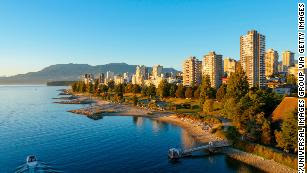 (CNN)The wife of a Chinese multimillionaire is suing the Vancouver government over a $200,000 tax bill she was served for allegedly leaving a $20.4 million mansion empty, highlighting the staggering wealth Chinese investors have parked in the Canadian city.

Vancouver is consistently ranked one of North America's most-expensive housing markets and experts say prices there have skyrocketed in large part due to Chinese investment.

He Yiju purchased the ocean-view mansion on Belmont Avenue, one of Vancouver's most exclusive addresses that has been dubbed "Billionaire's Row," in 2015. Her husband Zheng Jianjiang, a top politician in China's rubber-stamp parliament, the National People's Congress, is not named on the property listing. Their family had a combined net worth of $925 million in October 2018, according to Forbes.

In 2018, Vancouver's government ruled that He was subject to Vancouver's Empty Homes Tax, which requires owners of unoccupied homes to pay a 1% levy on their properties' value.

He denies, however, that the property was empty. In a petition filed last month to the Supreme Court of British Columbia, her legal team argued that the lot was being prepared for renovations pending the city issuing redevelopment permits.

He's attorney, Joel Nitikman, declined to comment when asked by CNN about the case.

Ellie Lambert, a spokeswoman for the city, said authorities do not comment on individual cases, but said there had been four suits received to date regarding the Empty Homes Tax.

The Empty Homes Tax was enacted in 2016 in a bid to cool Vancouver's overheated property market, and to encourage landlords to return under-utilized properties to the rental market.

Vancouver's housing prices have shot up significantly in the past 10 years, doubling in some parts of the city, although there are signs the government's attempts to bring down costs are working.

The rise in the city's property prices was largely attributed to wealthy foreign investors buying properties in the city. Embattled Huawei executive Meng Wanzhou, for example, owns two homes in Vancouver worth $4.2 million and $12.2 million.

Nearly 20% of the city's population are Chinese by ethnic origin, according to Canada's 2016 census.

Many Chinese nationals moved to Canada through a now-defunct program that sought to attract wealthy foreigners to settle and invest in Canada. Under the scheme, immigrants with a net worth of $1.2 million could get permanent residency in exchange for providing the government an interest-free, five-year loan of $609,000.

CNN's Caitlin Hu and Serenitie Wang contributed to this report

hearly umenichekshaaa
You must log in or register to reply here.