Poor African countries which persecute homosexuals will have their aid slashed by the Government in a bid by David Cameron to take his gay rights crusade to the Third World.

And he has warned the country's leaders to scrap plans to introduce draconian new anti-lesbian laws. 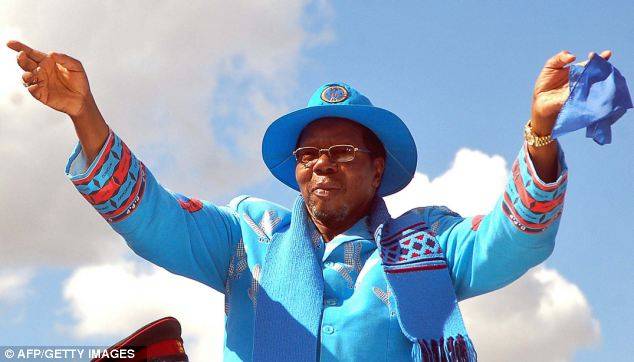 
Mr Mitchell, one of Mr Cameron's closest allies, is also threatening to impose further aid 'fines' against Uganda and Ghana for hardline anti-gay and lesbian measures.

The policy was disclosed after Mr Cameron defended his decision to legalise gay weddings when he addressed last week's Conservative Party conference.

Now he wants to persuade those countries where homosexuality is still taboo to follow his lead  and he is ready to reduce aid to some of the world's poorest people to do so.
The cut in aid to Malawi came after two gay men were convicted last year under the country's rigidly imposed ban on homosexuality.
Pop stars Elton John and Madonna joined an international outcry
when Tiwonge Chimbalanga, 26, and Steven Monjeza, 20, received a 14-year sentence for getting engaged. 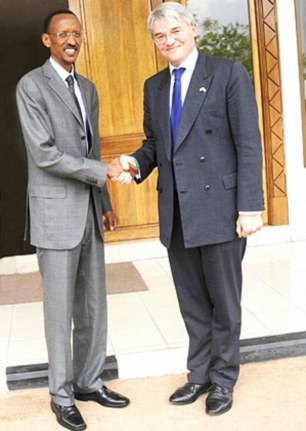 A judge in Malawi told them: 'I will give you a scaring sentence
so that the public will be protected from people like you, so that we
are not tempted to emulate this horrendous example.

'Malawi is not ready to see its sons getting married to its sons.'

The British Government described their jailing as 'shocking and disturbing'. The two men were later freed, but Malawi's defiant President Bingu wa Mutharika went ahead with new anti-lesbian laws, prompting a sharp rebuke from Mr Mitchell.

It is not the first time Britain has punished President Mutharika. The Labour Government reduced aid to Malawi by £3&#8201;million after he spent £8&#8201;million on a presidential jet.

However, Malawi has still received more than £200&#8201;million from Britain in the past three years.

Uganda faces the threat of an aid 'fine' by the UK unless it abandons plans to extend the death penalty to homosexuality.

Three weeks ago, Mr Mitchell protested to Uganda's President Yoweri Museveni, who has claimed 'European homosexuals are recruiting in Africa' and who believes gay relationships are 'against God's will'.
Uganda is due to receive £70&#8201;million from British taxpayers in 2011. During a visit to Ghana earlier this year, Stephen O'Brien  Mr Mitchell's deputy  told President John Evans Atta Mills that Britain would cut its aid unless he stopped persecuting gays.

However, it appeared to have little effect, even though Ghana gets £36&#8201;million a year from the UK, as weeks later the president vowed to 'institute measures to check the menace of homosexuality and lesbianism'. And one of his regional ministers called for the 'immediate arrest of all homosexuals'.

A spokesman for Mr Mitchell said: 'The Government is committed to combating violence and discrimination against lesbian, gay, bisexual and transgender people in all circumstances, in this country and abroad. We take action where we have concerns.
'We now allocate funds every three months, rather than every year, so that we can review a country's performance, for example on human rights, and take swift action when governments fall short. We only provide aid directly to governments when we are satisfied that they share our commitments to reduce poverty and respect human rights.'

I think they should stop the aid regardless because we don't need it.

Nyani Ngabu said:
I think they should stop the aid regardless because we don't need it.
Click to expand...

I agree with you 100%, we do not need their aid, they should come begging us for the resources we have, if only we could play our cards right.
T

I agree with you 100%, we do not need their aid, they should come begging us for the resources we have, if only we could play our cards right.
Click to expand...

I agree with you 100%, we do not need their aid, they should come begging us for the resources we have, if only we could play our cards right.
Click to expand...

You couldn't be more right on this. Kudos!
You must log in or register to reply here.