TEHRAN, Iran (CNN) -- Thirty people convicted of drug and other criminal charges will be hanged on Sunday, Iran's semi-official Fars News Agency reported Saturday.
A convicted Iranian drug dealer is hanged from a crane in the southern city of Shiraz in September.

A convicted Iranian drug dealer is hanged from a crane in the southern city of Shiraz in September.

The 30 had their cases tried by the highest judicial authorities and were found guilty of the charges brought against them, Iran's judiciary said in a statement.

The verdicts are final, and the sentences will be carried out Sunday, according to Fars.

The Iranian judiciary's statement said that all 30 were convicted of crimes including murder, murder in commission of a crime, disturbing public safety and security, being a public nuisance while drunk and being involved in illegal relationships -- relationships between men and women who are not married to each other.

Kidnapping and using weapons while committing a crime were among the charges.

The statement said that 20 of the people were convicted of drug and alcohol dealing, armed robbery and smuggling arms.

The judiciary said it will provide more details later as to the crimes committed by those condemned and added that the hangings should serve as a warning to those who are contemplating committing such crimes.

Others are awaiting trial, and their sentences will be carried out as soon as the verdicts are pronounced by the courts, the judiciary said.

The judiciary asked the public to notify the authorities if they have any information that might lead to arrest and convictions of criminals.

Iran's government launched a campaign March 20 to increase public security and bring the crime rate down.

Police cracked down on drug dealers, whom they called criminal gang members, and habitual criminals who use guns in the commission of their crime. Alleged weapons smugglers and people who break social and religious laws, including adulterers, were also targets.

National television showed scenes of what were described as criminals being paraded in chains as a deterrent to others. The wave of arrests has subsided, as officials are now prosecuting the suspects and sentencing those convicted
Click to expand... 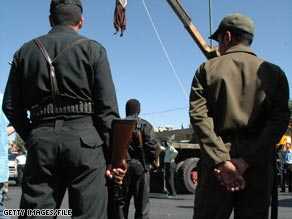 TEHRAN (Fars News Agency)- An Iranian police official here Saturday said that the law enforcement anti-drug squad has arrested an international band of drug traffickers in Tehran, saying that the gang, which included 85 African drug traffickers, has been totally disbanded.

The Chief commander of the anti-drug squad of the Iranian Law Enforcement police, General Hamid Reza Hossein-Abadi told reporters that in addition to the aforesaid group, 22 more African nationals have been arrested during the last year on charges of smuggling illicit drugs from or into Iran.

The General said that his troops have received reports early this year that African nationals smuggled drugs through Iran.

"Some of the African detainees confessed that they had swallowed drugs as a way of smuggling. Following these confessions, the anti-drug police started intelligence work to identify the rest of the gang in Iran.

"After five months of intensive intelligence work, Iranian police could obtain the required information from their liaison offices in Pakistan, Afghanistan and Turkey to identify this international network of drug traffickers, which smuggled cocaine, heroin, and crack," he added.

The General also said that the police had staged simultaneous operations in several Iranian provinces and Tehran on August 15 to arrest the band members, and pointed out that the group has been completely disbanded.

"In these operations, 90 members of the band were arrested, including 85 individuals from such different African countries as Tanzania, Nigeria and Ghana, two individuals from Pakistan and 3 citizens from Iran.


He also said that the smugglers swallowed cocaine in Dubai and smuggled it into Tehran and that they swallowed heroin, crack or crystal when leaving Iran.
Click to expand...