US admiral urges caution on Iran

Adm Mullen said the results of war in Iran would be unpredictable
America's top military officer has said opening up a third front in the Middle East through a strike on Iran would be "extremely stressful" for US forces.

Adm Mike Mullen, chairman of the Joint Chiefs of Staff, was commenting on the likelihood of US or Israeli military action over Iran's nuclear programme.

Tensions have risen amid reports Israel could be planning a possible strike against Iran's nuclear facilities.

Iran denies its nuclear programme is anything other than peaceful.

The BBC's Justin Webb in Washington says it has been clear for some time that Adm Mullen does not want to attack Iran.

But his latest remarks suggest he is fighting hard behind the scenes for both the US and Israel to think carefully about the consequences of an attack before considering mounting it, he says. 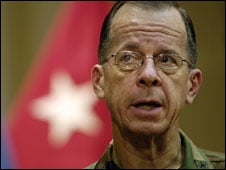 At a US defence department news conference, Adm Mullen refused to say what Israeli leaders told him during meetings last week about any plan to strike Iran.

But he warned that opening up a third front, after Iraq and Afghanistan, would be "extremely stressful, very challenging, with consequences that would be difficult to predict".

Asked if he was concerned Israel would strike before the end of the year, he said: "This is a very unstable part of the world and I don't need it to be more unstable."

The admiral said that if a conflict began, he believed Iran would have the capability to disrupt ship traffic through the strategic Strait of Hormuz, a waterway near the Persian Gulf, but he would not say if the US Navy was stepping up its patrols in the region.

He said: "I believe [Iran is] still on a path to get nuclear weapons and I think that's something that needs to be deterred."

He added: "My position with regard to the Iranian regime hasn't changed. They remain a destabilising factor in the region.

"But I'm convinced that the solution still lies in using other elements of national power to change Iranian behaviour, including diplomatic, financial and international pressure."

He called for dialogue between the US and Tehran.

Adm Mullen's boss, US President George W Bush, has also been asked about recent speculation that there might be a military strike on Iran.

The president has said all options were on the table but that military action would not be his first choice. His senior soldiers will be pleased to hear it.
You must log in or register to reply here.

Erdogan names Trump, Putin among leaders whom he admires