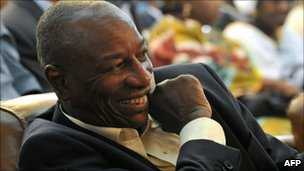 Mr Conde and his rival both declared victory earlier on Monday​

Opposition leader Alpha Conde has won the presidential run-off in Guinea, the electoral commission has said.

Mr Conde gained 52.5% of votes in the 7 November poll against former Prime Minister Cellou Dalein Diallo, according to provisional results.

The elections aim to mark the end of 52 years of authoritarian rule, but have been marred by violence and delays.

Mr Diallo, who has alleged fraud, earlier said he would not accept the outcome of the polls.

After the announcement, Mr Conde, 72, reached out to Mr Diallo, saying: "The time has come to join hands".

Both Mr Conde and Mr Diallo - who won the first round of polls - earlier declared victory ahead of results.

UN Secretary General Ban Ki-moon meanwhile released a statement calling for Guineans "in the national interest, to accept the results of the elections and to resolve any difference through legal means."

Supporters of Mr Conde celebrated the outcome in the capital, Conakry.

"We won," one supporter told Reuters. "(Conde) has suffered too much but that is all over now."


According to the electoral commission, Mr Conde received 1.47m votes in the country's 28 districts, against 1.3m votes, or 47.5%, for Mr Diallo.

Voter turn-out in the West African state was 67%, the commission added.

Mr Diallo earlier said he would not accept results based on fraud, claiming that supporters in two counties were too intimidated to vote after ethnic riots against the Peul in the days before the poll.

Ahead of the announcement, tensions in the capital, Conakry, sparked protests and riots by supporters of Mr Diallo.

Despite a ban on political demonstrations, activists took to the street, burnt tyres and set up barricades in parts of the capital. Several people were arrested and injured in clashes with riot police.

Some members of Mr Conde's Malinke community have alleged that they have been attacked and had their homes burnt down by Mr Diallo's supporters.

"They said that if Cellou (Diallo) does not win that they will kill all the Malinke," said 60-year-old Moussa Dioubate, who said some men had broken the windows in his house and set the mattress on fire.


International observers said the election was carried out peacefully, while France's former foreign minister, Bernard Kouchner, described the vote a "historic achievement after 50 years of dictatorship".

Mr Diallo gained 44% of the first round vote in June, compared with 18% for Mr Conde. The opposition leader later complained of fraud.

Guinea has been led since January by the interim government of Gen Sekouba Konate, who took over from the leaders of a 2008 coup.

The military seized power after the death of autocratic President Lansana Conte, who ruled the mineral-rich state for 24 years.
Guinea is the world's largest exporter of the aluminium ore bauxite, yet the country is one of the poorest in West Africa.

Gunshots were heard in several suburbs of Conakry on Monday after veteran opposition leader Alpha Conde was announced the winner of a presidential poll, according to an AFP journalist and witnesses.

The shots were heard in the same neighbourhoods were violence had broken out earlier in the day, in particular Ratoma and Hamdallaye whose streets were checkered with security forces.

One person was killed and dozens injured earlier Monday in clashes between supporters of losing candidate Cellou Dalein Diallo and police.

The suburbs are predominantly inhabited by Fulani, the same ethnic group as Diallo. Conde is a Malinke, and the electoral campaign was marred by violence between the country's two ethnic majorities.

Suburbs backing Conde burst into joy at the news of his victory, announced by the electoral commission. 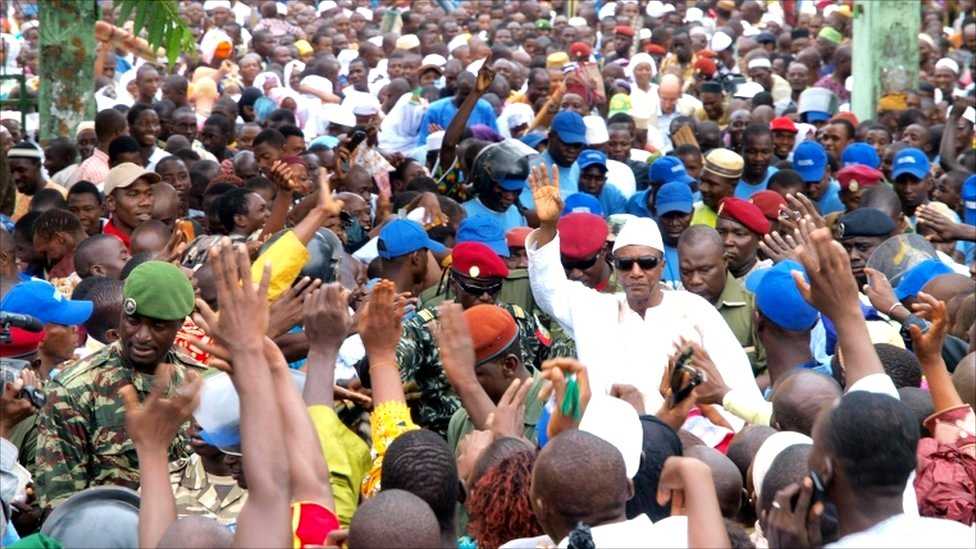 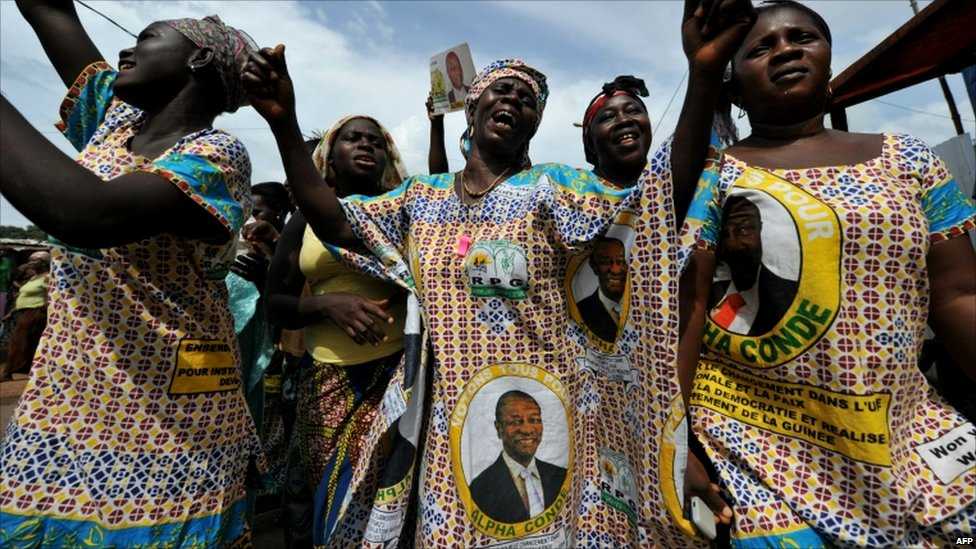 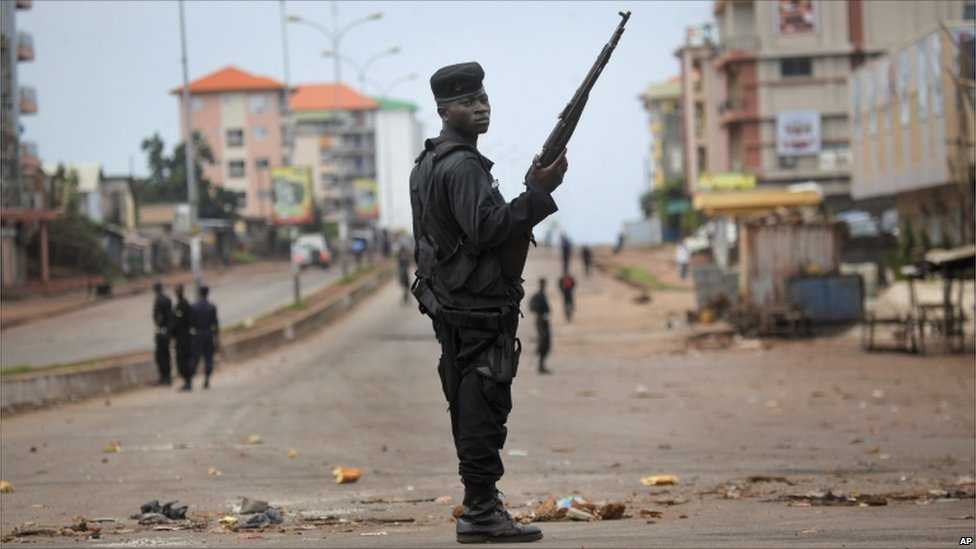 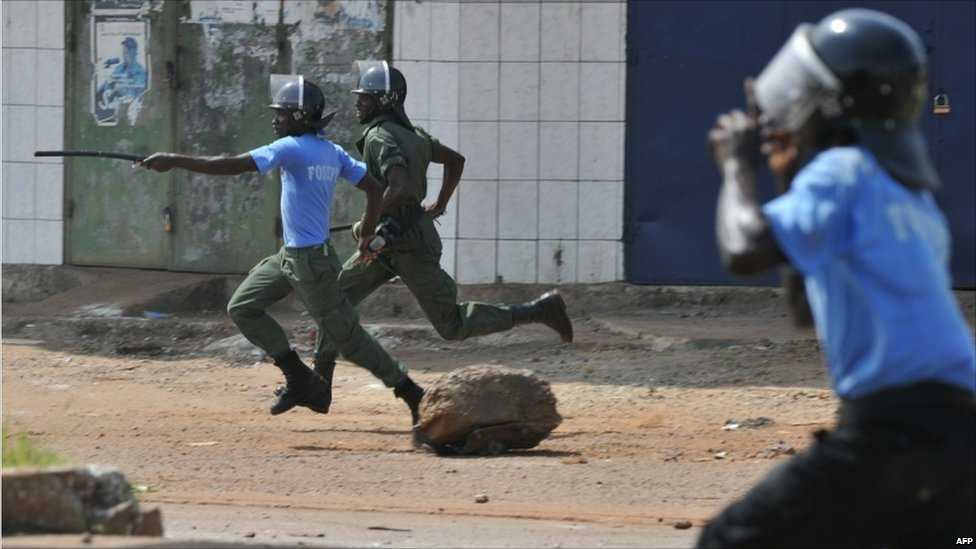 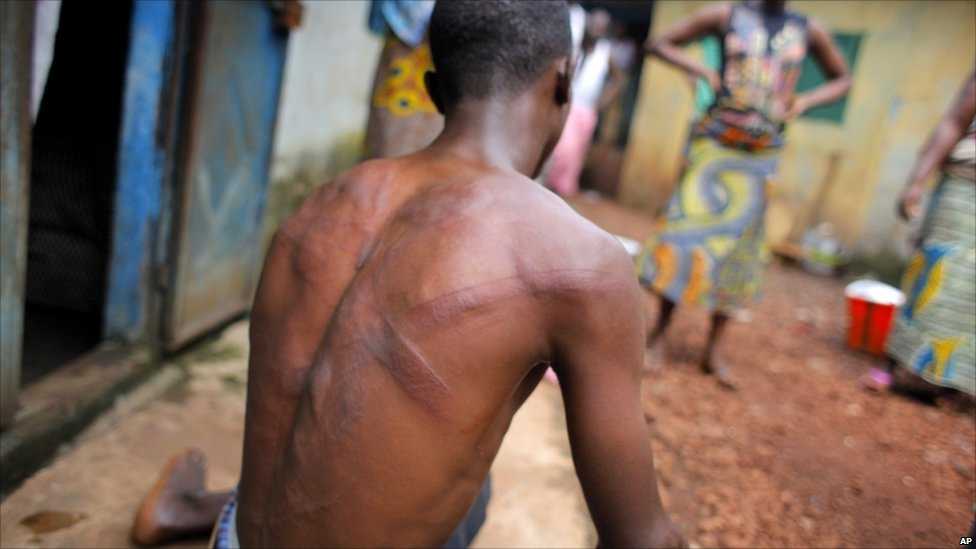 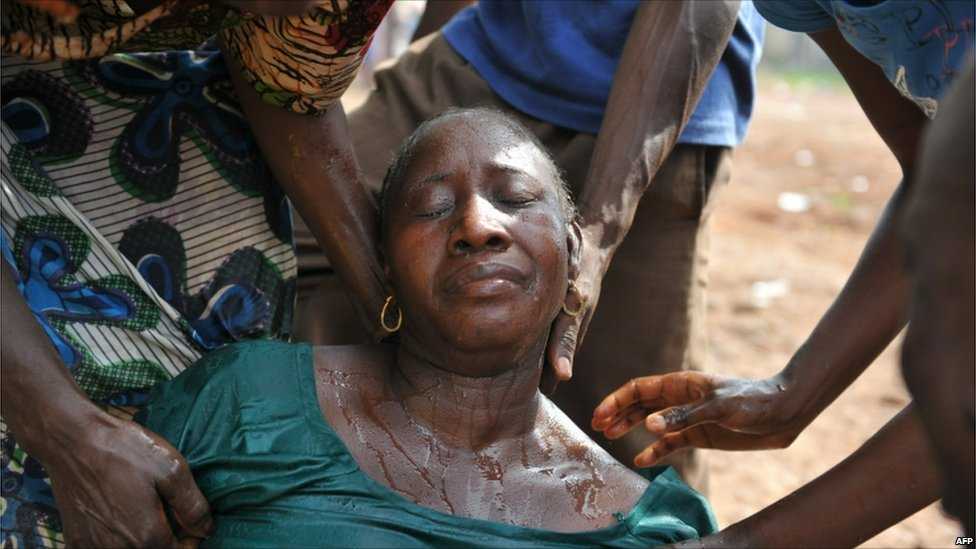 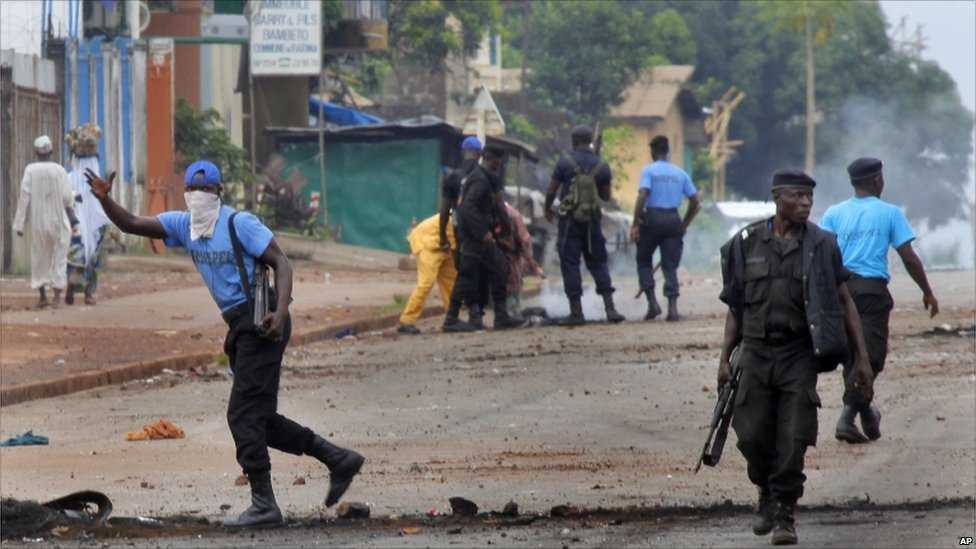 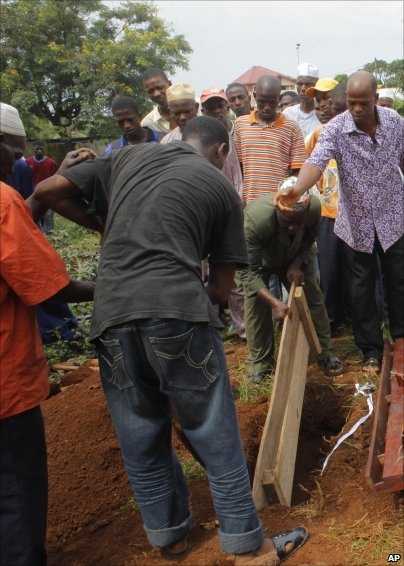 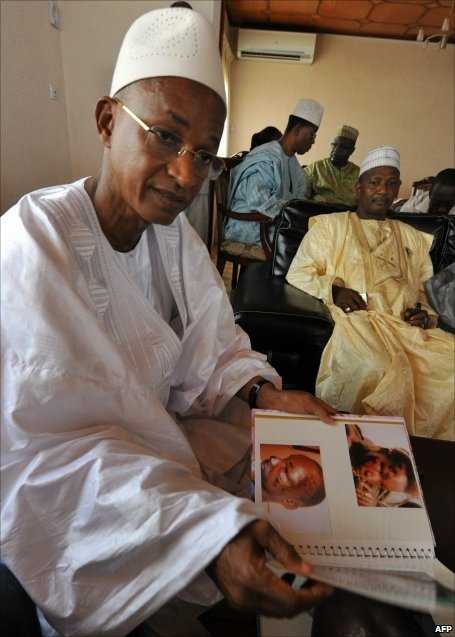 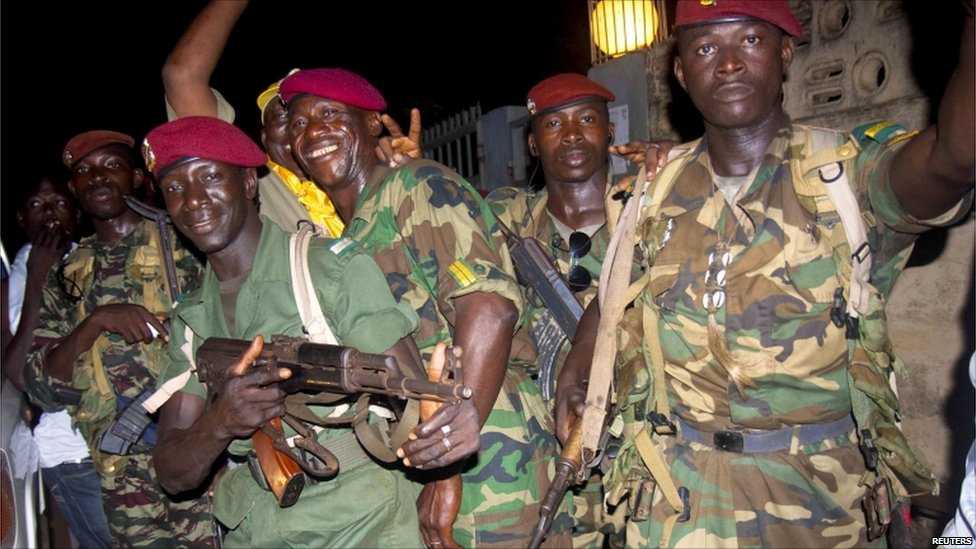 Yeah, Guinea, nice people. i had a friend Alpha back in college i think his happy at the moment. These are among the most friendliest people in Africa. I also realized we had similar systems and similar moral values, but they speaks lots and lots of french, and fulani. Fulani is similar to kiswahili and its also among a major language in the west afrika. They cook good!

Congrats to them by voting out dictators!!! They have to unite and built their country now.:smile-big:

Supporters of Guinea's presidential candidate Alpha Conde celebrate in front of their party heardquarters in Conakry on November 16, 2010 after their candidate was declared the winner of the country's first free presidential election. The 72-year-old veteran opposition politician Alpha Conde was declared the winner after a tense day of violent clashes as his rival's camp claimed voting fraud.​


Guineas acting leader declared a state of emergency today after violence which has raged since a disputed presidential election claimed three more lives.

Interim president General Sekouba Konate, who has led the troubled country since January, decreed a state of emergency would last until results which name opposition leader Alpha Conde the victor, are confirmed by the Supreme Court.

The announcement comes as the death toll since Monday rose to seven as three more bodies were discovered in Ratoma, the only suburb in Conakry which defeated candidate Cellou Dalein Diallo won in the November 7 vote.

The president of the republic decrees a state of emergency throughout the country as of today November 17 until the proclamation of definitive presidential election results by the Supreme Court, said Major Mohamed Kasse, reading the decree on national television.

In later comments to AFP, Kasse explained the decree meant any protest, any gathering was forbidden.

Mr Diallo, a member of the Fulani ethnic group, has said he is the rightful winner and is challenging the results, citing massive voter fraud.

While he called on his backers to refrain from violence his supporters have clashed with security forces in several of his strongholds around the country.

A doctor on board an ambulance in the Conakry district said three deaths had been recorded on Wednesday.

We have witness accounts from the scene and we were told it was members of Fossepel who fired, he said, referring to the special electoral security force set up by the interim government.

There was no official toll but earlier violence had claimed at least four lives, including three killed by security forces, according to various sources.

However Guineas interim prime minister, Jean Marie Dore, blamed the violence on Diallos supporters whom he branded as hooligans.

He said Diallo had sparked the protests on Monday with his fraud claims after the victory of Alpha Conde, who won 52.52 percent of the votes against Diallos 47.48 percent. The Supreme Court has to confirm the results.

Mr Dore, speaking on national television said: In recent days, hooligans... have engaged in acts of vandalism by targeting innocent citizens and their property.

There were unacceptable acts, despite our repeated calls to respect the law, he said, referring to unrest in Diallos electoral strongholds of Ratoma in Conakry and Labe, Pita and Dalaba in Middle Guinea, a predominantly Fulani ethnicity region.

Mr Dore said an overnight curfew had been imposed in the Labe region. As observers raised concerns of excessive force by Guinean security forces, Diallo accused them of savage brutality against his supporters and members of his Fulani ethnic group.

The firing of automatic weapons in Ratoma could be heard in the capital from Tuesday night until dawn.

Inhabitants and journalists from Pita and Dalaba contacted by phone accused police officers of abusing people and looting shops overnight.

After a campaign marred by ethnic clashes between the two majority tribes, the Fulani and Malinke, Conde reached out to his rival after being announced the victor, saying it was time to join hands. (AFP)