HEGINS, Pa. -- Six-year-old Josiah Viera grabs his batting helmet and slowly puts it on his head. The cheers begin. He practices his stance &#8230; even mimics his hero, Phillies first baseman Ryan Howard, by spitting in his hands. His teammates are yelling louder now. Almost everyone in sight pauses. It is an at-bat worth watching. Josiah stands 27 inches tall and weighs just 15 pounds.


"Pitch it to me underhand. I don't use the tee," Josiah says to his T-ball coach before he steps inside the batter's box. In the distance, fellow little leaguers chant, "Josiah, Josiah, Josiah." Most of them are wearing T-shirts with a picture of Josiah on the front that says "Friends Forever."


The ball floats for a few precious seconds. Josiah's eyes are wide. He cracks the ball down the third-base line and begins to run. His helmet bounces around. His little legs take the biggest possible steps. His smile is eternal.


Josiah is living his wish. He is playing baseball. The three innings he spends on the diamond are pure joy.


This is Josiah's time.

It's all in the name


Josiah is a biblical Hebrew name, meaning "God has healed." He was born May 25, 2004, and weighed 5½ pounds. Doctors gave him a clean bill of health. But two months later, Josiah's mother, Jennifer Viera, noticed something was wrong. 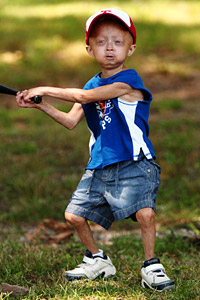 Christina Houser Photography One of Josiah Viera's dreams was to play baseball on a team.


"He wasn't putting on weight, and his skin was actually getting tighter," she said. "That's when the pediatrician said, 'I think we need to send you to a specialist.'"


Josiah put on only 2 pounds in his first six months. For most of his first year, he was in and out of the hospital with infections and illness. After his first birthday, in the hospital, a dermatologist gave a definitive diagnosis: Hutchinson-Gilford Progeria syndrome.


"As soon as he walked out the door, I got on the Internet and I looked it up," Jennifer said. "In the left-hand corner, there was a picture of a little boy, and before I even got the testing back, I knew that's what Josiah had."


Progeria is a rare genetic disease that causes accelerated aging in children. Its name, of Greek origin, means "prematurely old." According to doctors, the chances of a child being born with Progeria are about one in 4 million. There are roughly 50 kids worldwide who have the disease. The life expectancy of a child with Progeria is between 8 and 13 years. (The movie "The Curious Case of Benjamin Button," starring Brad Pitt, is based on the disease.)


"It's hard to explain being a mom or a parent and knowing that potentially you're going to outlive your child," Jennifer said.


Dr. Colleen Walsh treats Josiah. "About one year equals about 10 years," she said. "So if that's the case, then Josiah's looking at being between an average 60- to 70-year-old."


Josiah has numerous health problems, and experiences seizures and ministrokes. Despite that, he began playing baseball in his backyard with the neighborhood boys in the past year. Eventually Josiah told his mother he wanted to play on a team. There were obvious concerns. 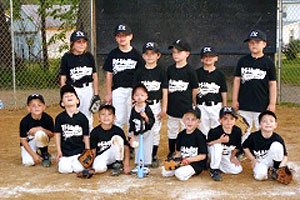 
"I just wanted to make sure that he was not going to get hurt potentially in the game," she said. "Prior to this all taking place, I remember distinctly one day, Josiah sitting in our living room on my mom's lap and saying, 'Nana, my only dream is to play baseball.' My goal has always been in everything that he's ever done is for however long Josiah's with us, let him be a kid. Let him experience life. I just I knew I had to let him play."


Most folks in Hegins, a town of fewer than 5,000 people, were talking about Josiah's desire to play T-ball -- and wanting to see it.


"What they did tell me is he had one dream and that was playing an organized baseball game," said Sam Bordner, president of the Tri-Valley Baseball League. "I let it go for a week or two, and several parents here that knew Josiah hounded me again, like, 'What are we going to do? Are we going to let him play or not?' I'd be sticking my neck out to jeopardize maybe the whole league, and that's why I was a little hesitant of doing it."


Bordner set up a meeting in April and visited Josiah at his house. He wanted to meet this little boy with the passion for baseball. "So we walked in, said hi to him," Bordner said. "He came over and looked straight up at me, and he asked me, 'Coach, can I play?' Now what are you going to say to a little kid like that? I handed Josiah the shirt and the hat, and I told him, I said, 'Look, we're going to let you play.'"


Josiah joined his Tri-Valley White Sox teammates and played in a three-inning game May 5. He told his coach the right way to pitch: underhand, of course. He hit the ball each time up, racing down the first-base line.


"He makes it to first base, and he turns around and looks at the coach and goes, 'YEAH, just like that.' Josiah is in his heaven. He's just in heaven," said Dave Bohner, his maternal grandfather.


"I know kids are curious. A lot of times, a child who sees Josiah will ask, 'Why doesn't Josiah have any hair?' Or kids will remark he's a baby. Josiah will stand there and say, 'I'm not a baby. I'm a big boy,'" his mother said. "To have him be accepted like that or to not be accepted, I think was the biggest issue for me. The boys were like, 'Hi, Josiah,' and they wanted to throw ball with him. It was like he was already a part of the team since the beginning of the year."


Following the game, as Bordner spoke to the team, Josiah was noticeably quiet. He pulled his hat down over his eyes and began to cry. Bordner said he asked him what was wrong and Josiah told him, "I don't want it to be over."


Josiah suffered a series of ministrokes the week after that game, but no one blamed his exertion for the problems. 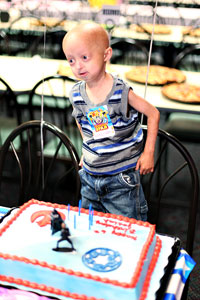 
"I thought that I lost a part of him that day, because he couldn't talk. He tried to and he'd cry; he wanted to say something but he couldn't," Bohner said. "We've been told it could take his speech, could take his movement, we don't know. Only God knows what will happen next."


Josiah was in the hospital for several days. He told the nurses and doctors that he got to live out his dream to play on a baseball team, and that he missed his teammates.


"My teammates are my friends," Josiah said.


On May 21, just a few weeks after the game and after he was released from the hospital, Josiah's teammates threw a surprise birthday party for him at the Hegins baseball diamond. As they walked onto the field, everyone sang "Happy Birthday" to him.


"We want you to play in our final three games if you are able to do so, OK? And your mom says you can," Bordner told Josiah.


And there was another surprise. Josiah had wanted to go to a Major League Baseball game and watch his favorite team, the Philadelphia Phillies, and his favorite player, Ryan Howard. On a table, the team had cupcakes that spelled out "Phillies." Bordner told Josiah he was going to go to a Phillies game and presented Josiah with four tickets.


Josiah could barely contain himself. He jumped up and down. "Yeah!"

A hero meets a hero


The Phillies hosted the San Diego Padres on June 6. Howard went 2-for-6, and the Phillies lost 6-5 in 10 innings. A family friend had contacted the Phillies' community relations department and told Josiah's story. Before the game, there was a surprise waiting for him.


"What's up? How are you doing?" Howard said when he met Josiah.


Howard gave Josiah a Phillies jersey and took his hand and walked with him into the locker room.


As Josiah walked in, he got a Flyin' Hawaiian foam finger from outfielder Shane Victorino and told Roy Halladay about his sinker ball. But meeting Howard was the highlight.


"My favorite player is Ryan Howard because he hits home runs," Josiah said.


At just more than 2 feet tall, Josiah barely came up to Howard's knees. The former MVP gave Josiah his bat and batting gloves that he had used the day before when he hit a double and drove in two runs against the Padres. Josiah struggled but was able lift his new bat, and tried on the gloves.


Josiah wanted to suit up for the Phillies. Meeting his hero was a dream come true, as he later said. His desire to play on the Phillies' roster that night was pure.


"He loves the game for the game," Bohner said. "Not win or lose; it's just love to swing the bat, hit the ball and run the base."


By the time Josiah played in his fourth and final T-ball game of the season, word had spread to the surrounding little leagues. A local radio station came to broadcast the event live, including streaming video. Hundreds of little leaguers came with their hats and gloves, all hoping to play alongside Josiah.


"My main goal was to get as many kids here as possible and play T-ball with him," Bordner said. "Our kids played with him; they understand what's going on, but other kids out of the area, I don't think they understand the whole big picture of why we're doing it. But the ultimate thing was for him not only to have those kids as his friends but to get as many kids here for him to make new friends." 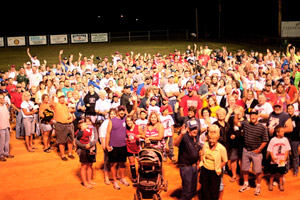 
Border had special shirts made with "Friends Forever" and a picture of Josiah on the front. On the back, they had the No. 1 and Josiah's name. The 200 T-shirts for sale -- 100 for parents and 100 for children -- sold out quickly.


Nearly 1,000 people came. Kids stood in the outfield chanting his name every time he came to the plate, ran out to his position and scored a run.


"I don't know what Josiah thought when they all started to chant his name when he was out on the field," Jennifer said. "You could see him smile, and he just soaked it all in."


Josiah played on all the teams that night. In this league, each players gets five pitches thrown to them before a tee is brought out. Josiah never needed the tee. His new friends presented him with an MVP trophy and other gifts.


"I think that's what really touched the people, that even though he has this sickness, he gave it his all," said his grandmother, Deb Bohner.


After the game, everyone lined the field along the outfield fence. Jennifer carried her son around the field, and Josiah slapped five with each person.


"I have had lots of people come to me since then, adults, little kids, teenagers who play softball and baseball, and say that he's their hero because he didn't let his condition stop him," Jennifer said. "He was placed here to touch people's lives."

I had to cry after this video. Inspirational video. Maisha ni kuishi kwa furaha na amani. Love your friends, family, co-worker. Josiah is My HERO TOO. Allah is Great.