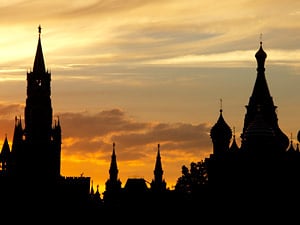 Remember that Russian spy-ring that authorities rounded up back in June? Right, that one.
Well, it looks like members of the operation were betrayed by their boss. And it turns out he has defected to the United States, throwing Russia's foreign intelligence service into turmoil.

A Moscow newspaper, Kommersant, has reported that a Colonel Shcherbakov, who ran Russia's deep-cover U.S. spying operations, was responsible for the spies' unmasking, and that he left Russia just days before the spy-ring arrests were announced June 28. Gennady a Russian lawmaker who sits on Parliament's national security committee, has confirmed the Kommersant report.
Shcherbakov, whose first name was not reported, would become one of the most high-ranking turncoats since the fall of the

An unidentified Kremlin official told the paper--a respected Russian business daily--that Russia is now planning to assassinate Shcherbakov, offering this chilling quote: "Do not doubt that a Mercader has been sent after him already." (Ramon Mercader was a Russian agent who assassinated Leon Trotsky in Mexico in 1940, after the exiled Bolshevik had fallen out with Stalin's regime.)

The news comes as a major blow to the reputation of Russia's foreign intelligence agency, known as the . According to AFP, Kommersant reports that Russian officials are pressing to find out why SVR brass allowed Shcherbakov to stay in his crucial post even though his daughter was living in the United States--an obvious threat to security even in less sensitive agencies.

"There has never been such a failure by Section S, the American department that Shcherbakov directed," one top Russian lawmaker told the paper.

There's already talk of a special panel being created to probe the reasons for the blunder. The SVR chief, former Prime Minister , may be fired and the entire unit folded into the Federal Security Service, the successor to the KGB, according to the paper.

The 10 spies arrested in June all pleaded guilty, and were deported back to Russia as part of a spy swap two weeks later -- though not before at least one of them, , became a tabloid sensation in the United States.

Meanwhile, U.S.-Russian relations appear to be clouded by the affair's ongoing fallout. Kommersant reports that Russia's intelligence service reacted so harshly to news of Shcherbakov's defection that it sabotaged recent talks between the two powers on anti-ballistic missiles. "The is so enraged that it keeps torpedoing all and any work with the Americans, even including ABM projects," a senior Russian diplomat told the paper.

he is DEAD MEAT !!!soon or leter He is dead man! they know where he is, Medvedev said his lesson is going to be learnt by every one...

catch him if u can
You must log in or register to reply here.

Top 10 most in-Demand jobs in USA

May 23, 2021
bagamoyo
B
History of Assassinations of Iran's Top Nuclear Scientists
2