The number of Americans living in poverty rose to 46.2 million last year 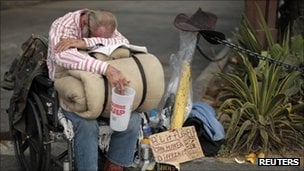 The number of Americans living in poverty rose to 46.2 million last year, nearly one in six people, according to the US Census Bureau's annual report.
The 2010 data shows the poverty rate at 15.1%, from 14.3% in 2009. The number of Americans without health insurance also rose slightly to 49.9 million.
The poverty rate was the highest since 1983, and tied with the level in 1993.
The number of Americans living below the poverty line has now risen for four years in a row.
The US definition of poverty is an annual income of $22,314 (£14,129), or less for a family of four, and $11,139 for a single person.
More poor children The Census Bureau data also showed that poverty among black and Hispanic people was much higher than for the overall US population last year - at 27.4% and 26.6% respectively.


Outside of the poverty line, the average annual US household income fell 2.3% in 2010 to $49,445 (£31,228).
Even younger Americans were also strongly affected. Twenty-two percent of those under 18 were living under the poverty line - up from from 20.7% in 2009.
Reacting to the data, the Children's Leadership Council, an advocacy group, said: "The rising numbers of children living in poverty is a direct result of the choices made by political leaders who put billionaires before kids. America's children should be our top priority."
Among regions, the South had the highest poverty rate at 16.9% and the highest percentage without health insurance, 19.1%.
'Nobody hiring'
Mississippi had the highest share of poor people, at 22.7%, followed by Louisiana, the District of Columbia, Georgia, New Mexico and Arizona.

At the other end of the scale, New Hampshire had the lowest share, at 6.6%.
The slight rise in the number of people without health insurance - up by nearly one million - was mostly caused by losses of employer-provided medical cover in the weakened economy.
Congress passed a health overhaul last year to deal with rising numbers of the uninsured, but the main provisions do not take effect until 2014.
The figures compound a stagnant US jobs report in August, when the unemployment rate was at 9.1% for the second straight month.
In Fort Washington, Maryland, mother-of-five Nekisha Brooks told of her struggle to find work since being laid off from her job at telecommunications firm AT&T several months ago.
Ms Brooks told the Associated Press news agency: "I've been putting in job applications every day and calling around, from housekeeping to customer service to admin or waitresses, but nobody seems to be hiring right now."

Ina maana the number of poor people in USA exceed the population of Tanzania.

Leornado said:
Ina maana the number of poor people in USA exceed the population of Tanzania.
Click to expand...