The CIA operation that should have prevented the Iraq war

The CIA operation that should have prevented the Iraq war 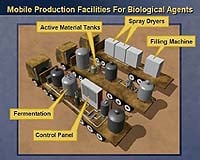