The Chinese say "Y'all look alike"

So you thought most Chinese people look alike huh? Apparently they think the same of black folks, at least black sprinters...

Despite being handed a ban on competing in the Olympics, disgraced sprinter Dwain Chambers still found himself on the front pages of the Chinese press the morning of the men's 100m final, in what turned out to be an extreme case of mistaken identity. 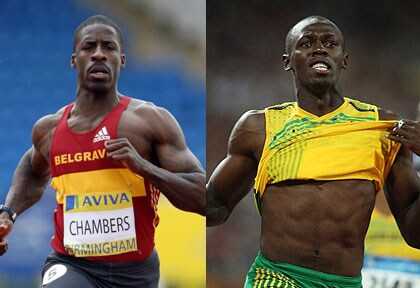 Jamaa hata hawafanani, not to the Chinese apparently

On the day which later saw saw Bolt break his own world record, a full colour picture of Chambers looking pumped up and ready for action dominated the front page of the Beijing Youth Daily. The headline above the image read: 'Especially Special'.

The newspaper, which has a daily circulation of over half a million copies had meant to make a reference to Bolt in the run up to one of the most anticipated races of the Olympics. However, when it came to selecting an image it seems Chambers and Bolt (despite there being no distinct similarities) were confused.

Bolt set the Bird Nest stadium alight on Saturday night breaking his own world record of 9.72 to 9.69. He has now qualified for the second round of the men's 200m.

Chambers meanwhile, who was banned earlier after testing positive for THG in 2003, is reportedly not even in Beijing. The 30-year-old is said to be in Spain working on his autobiography.

Chambers had launched an appeal earlier in the year to overturn a lifetime ban imposed by the British Olympic Association bylaw.

However, his bid was not successful and he was not allowed to travel to Beijing, despite winning the Olympic trials in Birmingham earlier in the year.

....doesn't surprise me at all for I'm one of those who think they all look alike also.......
You must log in or register to reply here.