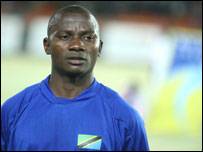 
Tanzania midfielder Said Maulid has joined Angolan Premier League-side Bravo du Maquiz on a three-year contract. The 27-year-old, who moves from Tanzanian side Young Africans, said: "It is exciting to be moving." The Taifa Star was spotted by the Angolan side, when he played for Yanga against Petro Atletico in a Champions League match earlier this year.

"Both clubs have agreed terms and the forms are signed," Yanga secretary general Lucas Kisasa confirmed. Maulid is the second East African to join the Angolan league this year after Kenyan striker Allan Wanga joined Petro Atletico last month. The 22-year-old Wanga told BBC Sport the conditions in Angola are good.
"The league is much better, there are so many professionals, including some from Brazil," he said.

"The game is better organised and the pay is better compared to what I earned in Kenya. "However, my ultimate objective is to play in Europe, and I believe there are better chances of moving to Europe when you are playing in the Angolan league," he added.
Click to expand...