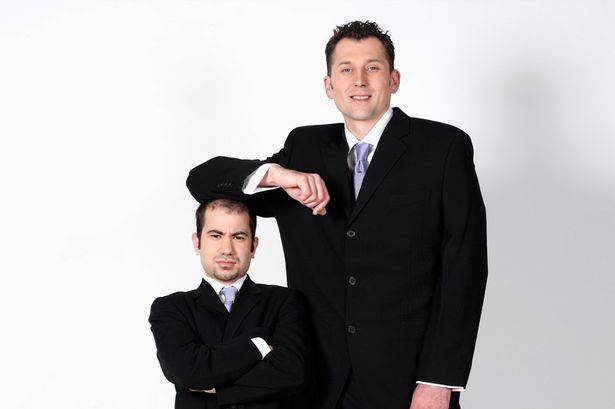 Scientists used virtual reality technology to reduce the height of volunteers travelling on a computer-simulated Tube train by 10in (25cm).

The experience of being shorter increased reports of negative feelings, such as being incompetent, dislikeable or inferior.

It also heightened levels of mistrust, fear and paranoia. Height-reduced participants were more likely to think someone else in the virtual train carriage was deliberately staring, thinking badly about them, or trying to cause distress.

Researchers believe the findings demonstrate the psychologically detrimental effect of experiencing social situations from a position closer to the ground.

"Height is taken to convey authority, and we feel taller when we feel more powerful. It is little wonder then that men and women tend to over-report their height.

"In this study we reduced people's height, which led to a striking consequence: people felt inferior and this caused them to feel overly mistrustful. This all happened in a virtual reality simulation, but we know that people behave in VR as they do in real life.

"It provides a key insight into paranoia, showing that people's excessive mistrust of others directly builds upon their own negative feelings about themselves.

The important treatment implication for severe paranoia that we can take from this study is that if we help people to feel more self-confident then they will be less mistrustful.

Participants in the study experienced the same simulated tube journey twice, once at their normal height and the second time from the perspective of someone 10in (25cm) shorter.

On both journeys, the other virtual passengers in the carriage were programmed to be "neutral" and not do anything to provoke feelings of fear or mistrust.

Generally the lowering of height was not consciously registered by the volunteers, but its effects were unmistakable.

"The results were very clear: lowering of height led to more negative evaluations of the self compared with others and greater levels of paranoia," said the scientists writing in the journal Psychiatry Research.

The findings were said to lend support to previous studies linking height and social status, and show how low self-esteem can lead to paranoid thoughts.

Professor Hugh Perry, who chairs the MRC Neurosciences and Mental Health Board, said: "For people whose lives are affected by paranoid thinking, this study provides useful insights on the role of height and how this can influence a person's sense of mistrust."
Click to expand...

Recent research analysing the lives of 500 males born between 1866-1915 on the Italian island of Sardinia showed those below 5ft 4in lived an average two years longer than taller men.

The study, led by Prof Michel Poulain from Belgium and Dr Luisa Salaris of the University of Cagliari in Italy, suggested the reasons included lower DNA damage, greater cell replacement potential and greater efficiency of heart-pumping.

In fact the worlds longest-lived humans are Japanese women, whose average height is 5ft 2ins.

Taller people are likely to be more intelligent, according to several studies.

Last year a team at the University of Colorado found that the link between height and intelligence was down to breeding.

They showed that clever people are more likely to choose taller people as partners  and vice versa.

As height and intelligence are both seen as attractive, the two tend to reinforce each other when the partners have children, said study chief Matthew Keller.

Not just in humans but in animals, traits that are sexually attractive tend to be correlated.

"Animals high on one sexually selected trait are often high on other ones.

Research also shows that a girls extra height in childhood is a stronger predictor of higher intelligence than it is for boys.

Researchers at the University of Sydney compared the wage packets of 20,000 people using indicators including weight and height, and found increased height translated into more cash on average  although this was more marked in men than women.

Andrew Leigh, one of the report authors, said: The wage gain from another two inches is approximately equal to one more year of labour market experience.

Perhaps this has to do with status.

"Having greater respect for taller people might be inadvertently leading to higher wages, he said.

Or perhaps it is because of discrimination, with shorter people getting the same treatment in the labour market that women and minorities experienced in the past.

Shorter women are less ambitious, say academics at St Andrews and Stirling universities.
They found they are more likely to start a family than focus on their career.

Researchers questioned 1,220 women from the UK, US, Canada and Australia and found the taller females were less broody, had fewer children and were more ambitious.

They were also likely to have their first child at a later date.

They speculated that tall women had more testosterone,which could translate into more male traits.

Clinical psychologist Dr Miriam Law Smith said: Men in all cultures are taller than women and height must therefore be an indicator of greater physical masculinity.

Although many believe there is an opposite effect with men  that the Napoleon Complex gives a shorter guy more drive to succeed, there is little solid research that backs it up with scientific data.

Tall men earn more, are brighter and have more kids  but shorter blokes make better husbands.
A study asked women to pick their ideal height difference for both short and long-term relationships from couple photos.

The findings, published in Biological Psychology, found tall men were twice as popular for flings than for long-term relationships.

Psychologist Dr Nick Neave said: The real leaders of the pack tend to not be very nice people.
"You dont want them around kids and they can be violent and leave you for someone else.

It might not be much of a surprise considering that they also have increased intelligence and earning power, but tall men are more likely to be fathers.

In 2000 researchers in Liverpool and Poland found fathers in a group of 3,201 Polish men were on average nearly an inch-and-a-half taller than those who had never had children.

The only exception was shorter men who were born in the 1930s.

They benefited when the Second World War lowered the numbers of all young men available.
The study concluded: There is active selection for stature in male partners by women.

Other research shows that shorter females are more family-focused and less ambitious and therefore tend to have more children then tall women.

A US poll of more than 454,000 adults found the taller ones live better lives.

And men who gave their lives the worst possible rating were more than three-quarters of an inch shorter than average.

Report co-author Angus Deaton (who is 6ft 4in) says the result is linked to the fact that taller people tend to have a better education and therefore higher income levels.

The data also suggests that shorter men need a 29% pay rise to give them the same life satisfaction.
Click to expand...

Society zetu pia zinaridicule short men and thus they feel that they are not as competitive as their taller bros for taller ladies. jamani sasa itabidi kuchuchumaa kumpiga busu mshikaji???

I personally think its wrong kuwatania wafupi. Societal stereotypes about short pple (men and women) are unfair and wrong.

On the other hand, pia kuwatania kunawafanya watilie bidii other areas of their lives in which they are good at kama wanasarakasi, wacheshi ama pia shuleni and so they make themselves heard! What if kuwatania does the opposite, wanajikunja and become invisible?

On the other hand, pia kuwatania kunawafanya watilie bidii other areas of their lives in which they are good at kama wanasarakasi, wacheshi ama pia shuleni and so they make themselves heard! What is kuwatania does the opposite, wanajikunja and become invisible?

Society zetu pia zinaridicule short men and thus they feel that they are not as competitive as their taller bros for taller ladies. jamani sasa itabidi kuchuchumaa kumpiga busu mshikaji???

10 Reasons why your husband will always cheat on you. No 5 is caused by you