[h=1]Gay marriage 'to be made legal in Britain by 2015'[/h]
The coalition is to push ahead with plans for gay marriage following the personal intervention of David Cameron.
Liberal Democrat Lynne Featherstone will today unveil plans to legislate to bring in gay marriage before 2015.
The Equalities Minister will also announce that Britain should be a world leader for gay rights. 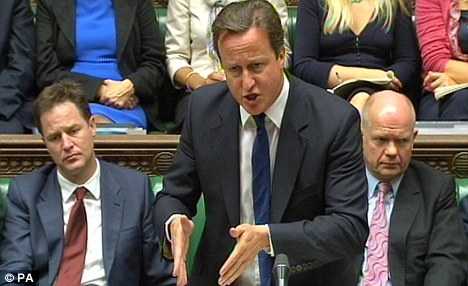 For whom the bells toll: David Cameron is backing legislation to legislate gay marriage

Vowing to be a personal champion for gay rights, Miss Featherstone will risk controversy by arguing that the Coalition should go even further in future.
At present, gays and lesbians are allowed to enter civil partnerships, which offer most of the legal protections of marriage. But the term marriage is not used.

Miss Featherstone will announce that a consultation will begin next March on allowing homosexuals to get married. A change in the law will follow the consultation.
Under the plans, same-sex couples will be able to have full marriages in registry offices, as heterosexual couples can.
But they will still be barred from getting married in churches and other religious buildings  even though some denominations want to offer the services. Coalition sources said ministers are determined to enact the change before the next election. 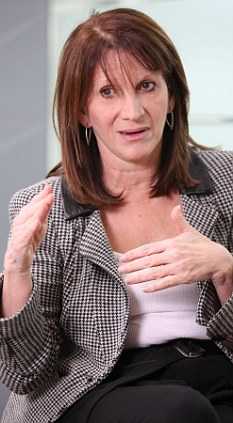 Downing Street made it clear that the Prime Minister had taken a strong personal interest in the move, and had insisted that progress be speeded up.
Under changes announced earlier this year, churches and other religious buildings will soon be able to host civil partnerships for the first time  although they will not be forced to do so.
The new move will be announced by Miss Featherstone, a divorced mother of two daughters, in a speech to the Lib Dem party conference in Birmingham today.

She will say: While on my travels as a champion for womens rights, I am and will be a champion for gay rights too.
Britain must not get complacent. We are a world leader for gay rights, but there is still more that we must do.
In March, this Government will begin a formal consultation on how to implement equal civil marriage for same sex couples.
And this would allow us to make any legislative changes necessary by the end of this Parliament.
Civil partnerships were a welcome first step  but this party rejects prejudice and discrimination in all its forms.
And I believe that to deny one group of people the same opportunities offered to another is not only discrimination, but is not fair.

Polls have shown that two-thirds of the public would support gay marriage. 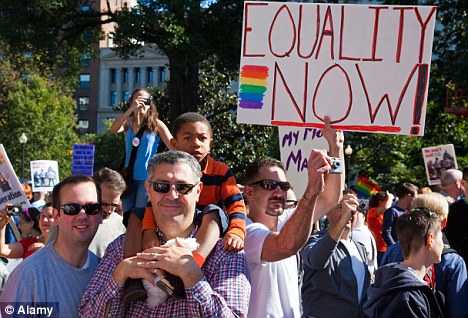 But Miss Featherstones emphasis on further steps will unsettle some Tories who backed Mr Camerons pledge to make the Government the most family-friendly in history.
The Coalition has pledged to consult on gay marriage on at least two occasions, but the lack of progress has forced Mr Cameron to intervene.
A Number 10 source said: He was very keen to press ahead on this. This is something that the Prime Minister has taken a strong personal interest in.
Last night Ben Summerskill, chief executive of gay rights group Stonewall, said: This change will make a difference to a number of gay people who are concerned at the differing status of civil partnerships and marriage.
But it will not apply to churches and it seems unfair as a matter of religious freedom that if some denominations  such as the Quakers  wish to celebrate same-sex marriages, they should be barred from doing so.
Former Tory Cabinet Minister Lord Tebbit expressed concerns about the Governments enthusiasm for gay marriage.
He said: I would have thought there were other priorities at a time like this.
There can be no such thing as gay marriage. Marriage is between a man and a woman to the exclusion of all others.