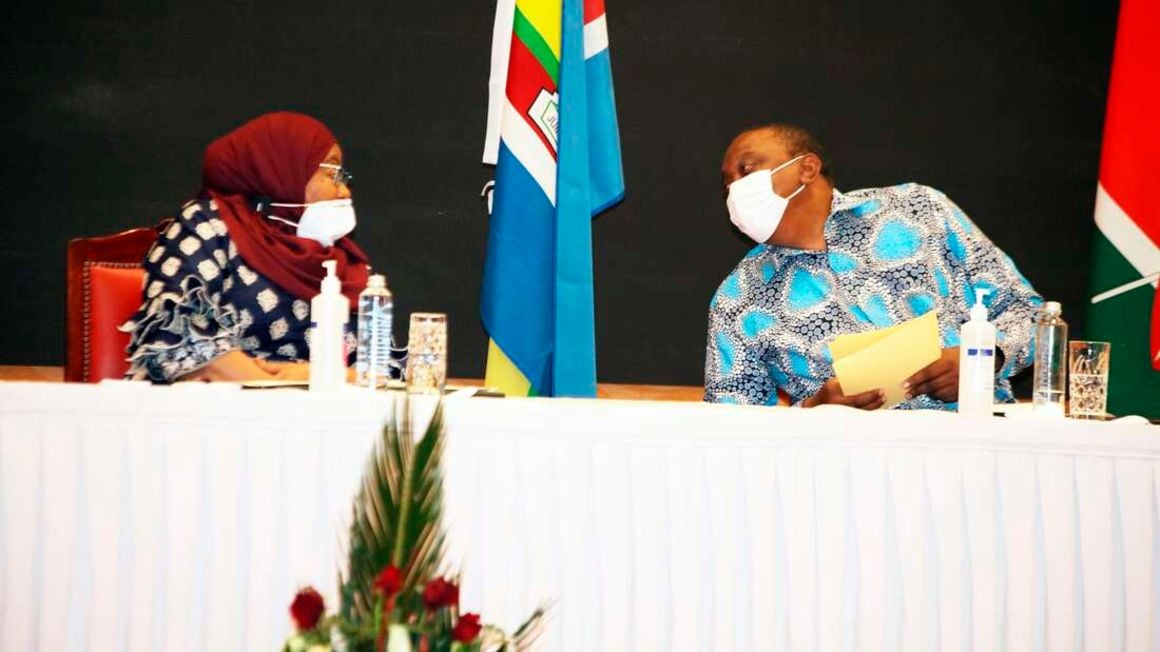 Kenya President Uhuru Kenyatta (right) and his Tanzania counterpart President Samia Suluhu Hassan having a word during Kenya-Tanzania Business forum at Serena Hotel on May 5, 2021. NMG PHOTO​
Tanzania will allow Kenyan juices and wheat flour into its market, following a bilateral meeting that has resolved the trade barriers that had caused clearance hurdles at the border.

In a meeting held last week in Arusha, Tanzania agreed to abolish inspection fees for processed products with standardisation mark, giving Kenyan goods a smooth entry into their market.

The meeting was a follow-up of the bilateral talks held between President Uhuru Kenyatta and his Tanzanian counterpart President Suluhu Hassan last month that sought to mend and restore bilateral ties damaged under the presidency of John Pombe Magufuli.

“Some of the issues resolved on the side of the United Republic of Tanzania include facilitating clearance of soft drinks such as juices, removal of inspection fees for processed products with standardisation mark including wheat flour,” read the communique.

Tanzania said it has started implementing the ‘Single Window’ system that allows traders to lodge information with one agency to fulfil all import or export-related requirements, a move that will reduce delays in the clearance of pineapple juices produced in Kenya.

The meeting directed Kenya Revenue Authority and Tanzania Revenue Authority to explore the possibilities of granting preferential access to cigarettes, made-in-Kenya tobacco sourced from Tanzania, and report back in the next bilateral meeting.

On the other hand, Kenya has agreed to grant cement coming from Tanzania preferential treatment in accessing its market. To enhance the process of clearance of goods, it was agreed that Single Customs Territory be fully implemented.

During the meeting, 64 issues were handled, 30 were resolved and decisions made on how to settle the remaining 34.

The next agreement should focus on accelerating acquisition.

Babaguy said:
The next agreement should focus on accelerating acquisition.
Click to expand...