=====
South African Airways (SAA) says its future is hanging in the balance after its workers went on strike on Friday to demand higher wages and protest planned job cuts, forcing the struggling state-owned carrier to cancel all flights.

SAA, which has not turned a profit since 2011 and is reliant on state bailouts, says the walkout by unions representing more than half of its workforce will cost it 50 million rand ($3.36m) a day and threatens its survival.

The unions rejected SAA's revised wage offer late on Thursday, and are also striking over the carrier's plans to cut more than 900 jobs in a bid to stem financial losses.

"If we don't get that funding, we'll not be able to continue," he said.

SAA's woes mark a dramatic fall from grace over the past decade, which has seen the flag carrier lose its place as Africa's biggest airline and become a source of frustration for taxpayers who have forked out more than 30 billion rand (two billion dollars) since 2012 to keep it in the air.

Now, without a permanent CEO, the airline faces mammoth turnaround requirements, including cost-cutting decisions that have been put off for years in a country where job cuts are a hugely sensitive issue. Unemployment is running at close to 30 percent.

The National Union of Metal Workers of South Africa (NUMSA) and the South African Cabin Crew Association (SACCA), who called the SAA strike, said the action will continue until their demands - including an 8 percent wage hike and job security - are met.

NUMSA spokeswoman Phakamile Hlubi-Majola said the airline's problems were a result of repeated management failures, and workers should not have to bear the consequences.

Talks between the airline and the union were scheduled to restart on Saturday. More than 200 flights were affected on Friday and Saturday, SAA spokesman Tlali Tlali told Reuters.

"Where is the money?"
SAA extended its cancellation of domestic and regional flights from Saturday to Monday, saying passengers would be accommodated on its sister airlines Mango and Airlink.

It said it was aiming to operate most of its international flights departing from Johannesburg from Sunday, with some inbound flights starting on Monday.

While some passengers told Reuters the airline had made alternative arrangements for their travel, others were left unsure how they would get to their destinations.

Vicky Mojela, 26, had been due to catch a flight to Uganda to attend wedding celebrations. She was told there were no direct or connecting flights.

"I'm disappointed," she said. "I just hope it doesn't happen again."
At SAA headquarters near OR Tambo international airport in Johannesburg, hundreds of workers gathered on Friday singing protest songs and holding placards reading "Flights are full, where is the money?" and "We are not fools."

Cabin crew member Olwetu Mrwetyane, 36, said her 11 years at SAA have been marked by job insecurity.

"Even now, we don't know if we're going to have a job," the mother of two said, adding she would be left destitute if she was laid off.

SAA's problems highlight the scale of the challenge facing President Cyril Ramaphosa, who has staked his reputation on turning around several ailing state-run firms that threaten the recovery of a stagnant economy.

Many have been left in dire financial straits by years of mismanagement and weak governance, analysts say.

Zemedeneh Negatu, Chairman of Fairfax Africa Fund, a private equity fund that has worked with 14 African airlines, said SAA had much bigger problems than a labour strike, including its governance and its debts.
Those stand at more than 12 billion rand, though the government has said it will pay the bulk of that over the next three years.

"When you have [that much debt] on your balance sheet, trust me, labour is not your issue," Negatu said. 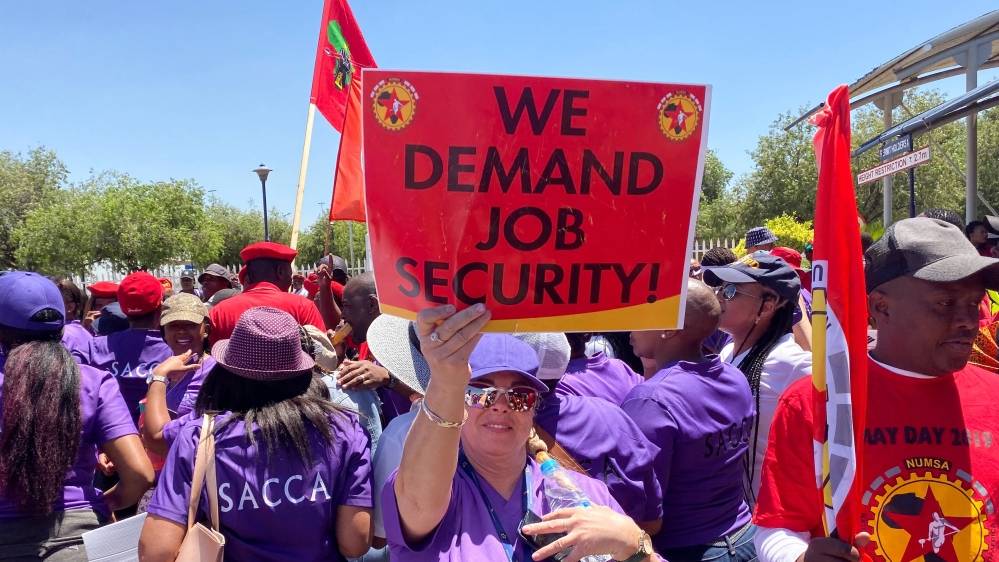 I am just ignoring you as unsound, short sighted and unstable mind.
You must log in or register to reply here.