Russia criticises US for flying Georgian troops back from Iraq

Russia criticises US for flying Georgian troops back from Iraq 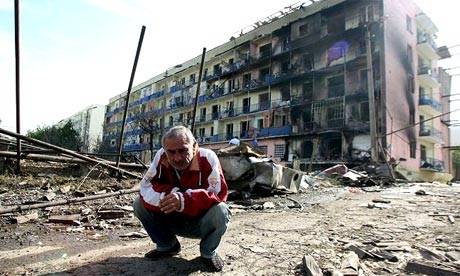 A Georgian man squats amid the rubble of a destroyed street in the town of Gori, Georgia. Photograph: Zurab Kurtsikidze/EPA

The Russian prime minister, Vladmir Putin, criticised the US today for flying Georgian troops home from Iraq, claiming the west had mistaken the real aggressor in the conflict over the separatist region of South Ossetia.

Putin, who is directing the Kremlin's actions in Georgia, said Moscow would take its mission in the region to "a logical conclusion", and accused some US politicians of having a cold war mentality.

The former president's attack came shortly after his successor, Dimitry Medvedev, was reported on Russian news agency Interfax as saying military operations in South Ossetia were nearing their conclusion. A senior Russian general said there were no plans to move its troops deeper into Georgian territory, although Russia had demanded that Georgian troops near the other breakaway province of Abkhazia disarm.

Moscow has rejected ceasefire proposals tabled by Georgia, saying Georgia is continuing to use military force in South Ossetia. Tblisi said up to 50 Russian bombers attacked its territory overnight, with one Russian bomb reported to have landed near the Georgian capital's civilian airport shortly after the French foreign minister, Bernard Kouchner, had landed.

Britain has condemned the Russian attacks as "deplorable", while Nato's secretary general, Jaap de Hoop Scheffer, joined the US president, George Bush, in criticising Russia for "disproportionate" use of force in the Caucasus. Nato said in April that Georgia would one day be a member of the alliance.

Bush told a US sports broadcaster in Beijing, where he was watching the Olympics, that he had spoken firmly to Putin. "We strongly condemn bombing outside of South Ossetia." Moscow has justified beefing up forces in Abkhazia as an attempt to prevent what it called Georgia's "genocide" in South Ossetia's capital, Tskhinvali.

Putin, speaking on state television, said: "It is a shame that some of our partners are not helping us but, essentially, are hindering us. I mean  the transfer by the United States of a Georgian contingent in Iraq with military transport planes practically to the conflict zone. The very scale of this cynicism is astonishing - the attempt to turn white into black, black into white and to adeptly portray victims of aggression as aggressors and place the reponsibility for the consequences of the aggression on the victims."

Georgia's envoy to the EU, Salome Samadashvili, said the EU must tell the Russians "they risk their future relationship with the European Union" and halt negotiations with Moscow over "a strategic partnership deal", if the country did not stop its armed campaign. EU foreign ministers are expected to meet over the crisis on Wednesday. There are concerns that oil prices, which have fallen in recent weeks, may rise once more because of the crisis in the region.

The Georgian president, Mikheil Saakashvili, has told the US vice-president Dick Cheney in a phone call that Russian aggression must not go unanswered. Cheney did not spell out what might follow but the threat of Russia's expulsion from the G8 - something the Republican presidential candidate, John McCain, has previously advocated - might be one lever Washington could consider pulling.

Russia has boosted its forces in Abkhazia to 9,000, although peacekeeping agreements only allow it to have 2,500 troops there. Moscow has flown in heavy artillery and its Black Sea fleet is blockading the coast. Moscow says 2,000 civilians were killed and thousands made homeless when Georgia attacked South Ossetia last week in an attempt to bring the separatists to heel. Witness accounts suggest the death toll was far higher.
You must log in or register to reply here.