Brazil striker Ronaldo was questioned by police after a run-in with three transvestite prostitutes he took to a motel.

The AC Milan star left an upmarket Rio de Janeiro nightclub with the call girls, according to police, but offered them about £300 each to leave when he discovered they were men. 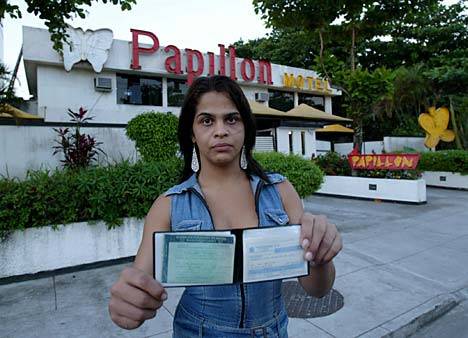 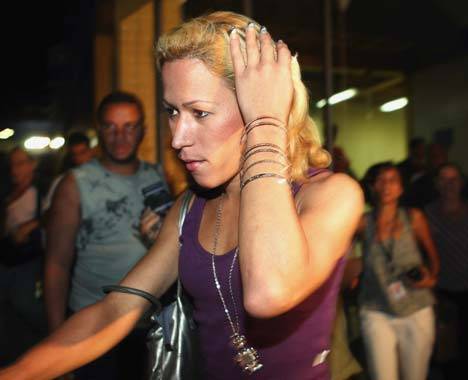 Transvestite Carla, one of the three prostitutes that went to the hotel with Ronaldo, walks past journalists as he arrives at the Barra da Tijuca police station in Rio 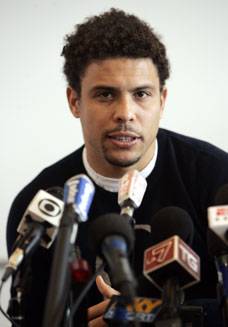 Embarrassment: Milan striker Ronaldo pictured at a press conference to announce his career-threatening knee injury back in February 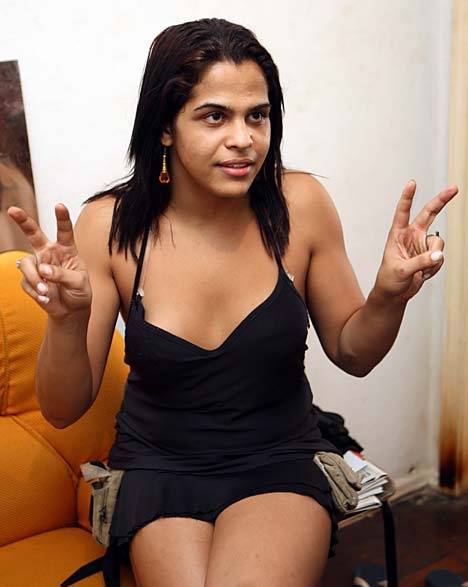 Andre, who prefers to be called Andrea, says she has a receipt from Ronaldo of the purchase of three transvestites for Sunday night and also claimed the 31-year-old took drugs.​
Ronaldo admitted he knew they were prostitutes when they met on Sunday night, but did not realize they were transvestites until they got to the motel.

She posted a grainy video on YouTube which purports to show Ronaldo and also posed with car documents said to belong to the three-time FIFA World Player of the Year.

Prostitution is not illegal in Brazil.

However, according to reports in Brazil, he told a police officer he feared the episode could end his career.

Police chief Carlos Augusto Nogueira Pinto said: "Ronaldo's testimony is more reliable. From zero to 10, I give his testimony a nine.

"He was very excited and wanted to go out and have fun, without the press knowing.

"Ronaldo said he is not good in the head and that he is going through psychological problems because of his recent surgery.

"But he committed no crime at all, it was immoral at best."


Transvestite Andre Luis Ribeiro Albertino, also known as Andreia Albertine, who works as a prostitute, talks to journalists in Rio


The player is back in Brazil recovering from a career-threatening knee injury.

The transvestites claimed Ronaldo was in Rio's City of God neighbourhood - made famous in a 2002 film - to buy cocaine. However, it is said he did not want to pay for their service and threatened to attack them if they divulged the case to the media.

Ronaldo released a press statement, saying: "In view of recent events and in order to clarify the athlete Ronaldo has never been a user of drugs, had no criminal complaint registered against him and is the victim of an attempted extortion."

He didn't know that they were trannies!! I am sure now playing career for Ronaldo is finished!!\

Jamaa nadhani ni kama usemavyo lakini hapa
it is beyond explanation.Kuna wanawake wazuri Brazil
na hata sijui what directed him to these trannies!!!
Click to expand...

RIO DE JANEIRO, Brazil (AP)  Ronaldo went into hiding Tuesday after a run-in with cross-dressing prostitutes that prompted police to investigate whether to charge one with trying to extort money from the soccer star.

The AC Milan player, in Brazil recovering from a knee surgery, canceled two TV appearances, and local media said he will continue physiotherapy at his home.

Police said Ronaldo committed no crime, but he was accused by one prostitute of using drugs and not wanting to pay.

Prostitution is legal in Brazil.

"It is necessary to clarify that no formal accusations were made against Ronaldo," read a statement on the player's Web site. "An advocate of social causes, Ronaldo has never used drugs and has always been admired by children in Brazil and around the world. There are indications of an extortion attempt in which the Milan striker is the only victim."

Ronaldo, a three-time FIFA player of the year, acknowledged to police he knew they were prostitutes but did not realize they were cross-dressers until getting to a motel early Monday morning, according to police.

The motel manager  identified only as Luisa  said Ronaldo, who was dressed and appeared to be sober, tried to get rid of the prostitutes after realizing they were men.

She told police Ronaldo offered the prostitutes $600 to end the incident but they would not accept dollars. The manager then converted the money into reals for Ronaldo, but before he made the payment one prostitute asked for 50,000 reals ($30,000) to keep the story from the media, according to the police document.

A motel waiter, who was not identified in the police documents, told police the prostitute went to the street and yelled "the Phenomenon didn't want to pay."

Witnesses also told police the prostitute who asked for 50,000 reals ripped out the phone wires to keep Ronaldo from calling for help, and broke into his car to steal his belongings, according to police documents. That prostitute later showed local media a car document belonging to Ronaldo.

Police inspector Carlos Augusto Nogueira said there was no evidence drugs were involved in the incident.

But he said Ronaldo and the prostitutes must return to the police station for further questioning next week. Nogueira added the one prostitute might be charged with extortion. Ronaldo will not be charged, Nogueira said, unless he threatened to physically assault the prostitutes, as one hinted.

The case made front-page headlines in several Brazilian newspapers Tuesday. And a brief video clip of Ronaldo at the motel, apparently taped by one of the prostitutes, became a big hit in Brazil after being uploaded on YouTube.

"It's really a soap opera," said 48-year-old Luiz Mendes, a private chauffeur. "Ronaldo has money to fill mattresses. He can afford the best and most beautiful women in the world. Why would he want to go out with these (prostitutes)."

Some Brazilians defended the star.

"It's no surprise they are on the front page of all newspapers," said 27-year-old Catia Lopes, a bakery-shop worker. "But I don't think Ronaldo's image was hurt. For me he is still the same person."

Ronaldo's spokesman did not immediately return an e-mail from The Associated Press.

Ronaldo went out Sunday night reportedly to celebrate Flamengo's 1-0 victory over rival Botafogo in the first leg of the Rio de Janeiro state final. Ronaldo is a fan of Flamengo and has said he wants to play for the Brazilian club before retiring. He was at Maracana stadium to watch Sunday's match.

The player told reporters during the match that he could be back in action in six months if his recovery continues to go as planned.

Ronaldo has won two World Cups with Brazil, including in 2002 when he scored eight goals, including two in the final against Germany.

Sitegemei tena kama Ac Milan watafanya nae buznez as usually akirudi!!
You must log in or register to reply here.