Sri Lankan President Gotabaya Rajapaksa has fled Maldives on board a flight for Singapore, a high-ranking security source in Colombo told CNN, as anger grows in his home country over his refusal to formally resign.

He is expected to arrive at Singapore's Changi Airport on Thursday night, the security source said. Rajapaksa had been waiting to secure a "private jet" from a close family member in Colombo, but that had "not materialized," the source added.

Rajapaksa left the capital of the Maldives, Malé, on board a "Saudi flight," the source said.

Saudia is the flag carrier of Saudi Arabia.

CNN has reached out to the Foreign Ministry of Singapore and Saudia but has not heard back.

Rajapaksa had been in Maldives for one day after fleeing Sri Lanka in the early hours of Wednesday -- the same day he had said he would resign.

But by Thursday, no formal resignation letter had been received by the Sri Lankan parliament's speaker, raising questions about the intentions of an apparently self-exiled leader who appointed the prime minister as acting president during his absence from his island nation.

Many protesters have vowed to continue to demonstrate until both men step down.

A high-ranking military official told CNN Wickremesinghe had appointed a committee of senior armed forces commanders to "restore law and order" across the nation.

By Thursday morning, as questions swirled over Sri Lanka's future, a calm had descended on the streets of the commercial capital Colombo, according to senior superintendent of police Nihal Thalduwa.

But everywhere there are signs that the country remains on a knife edge.

Amid crippling shortages of fuel, abandoned vehicles line the streets near gas stations. People are no longer able to drive to work, so they cycle instead. Some have taken to sleeping in their cars.

The Sri Lankan police force said one police officer had been seriously injured during the protests and was receiving treatment in hospital. An army sergeant had also been injured, it added.

United Nations Secretary General António Guterres on Thursday said he was following the events in Sri Lanka "very closely" and called for a "peaceful and democratic transition."

"It is important that the root causes of the conflict and protestors' grievances are addressed," he wrote on Twitter. "I urge all party leaders to embrace the spirit of compromise for a peaceful and democratic transition." 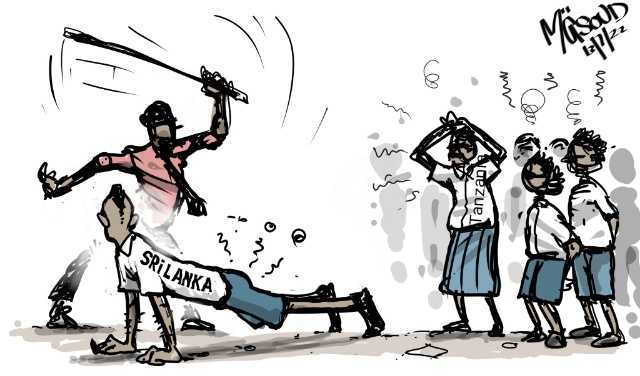 Muda umeongea...
You must log in or register to reply here.