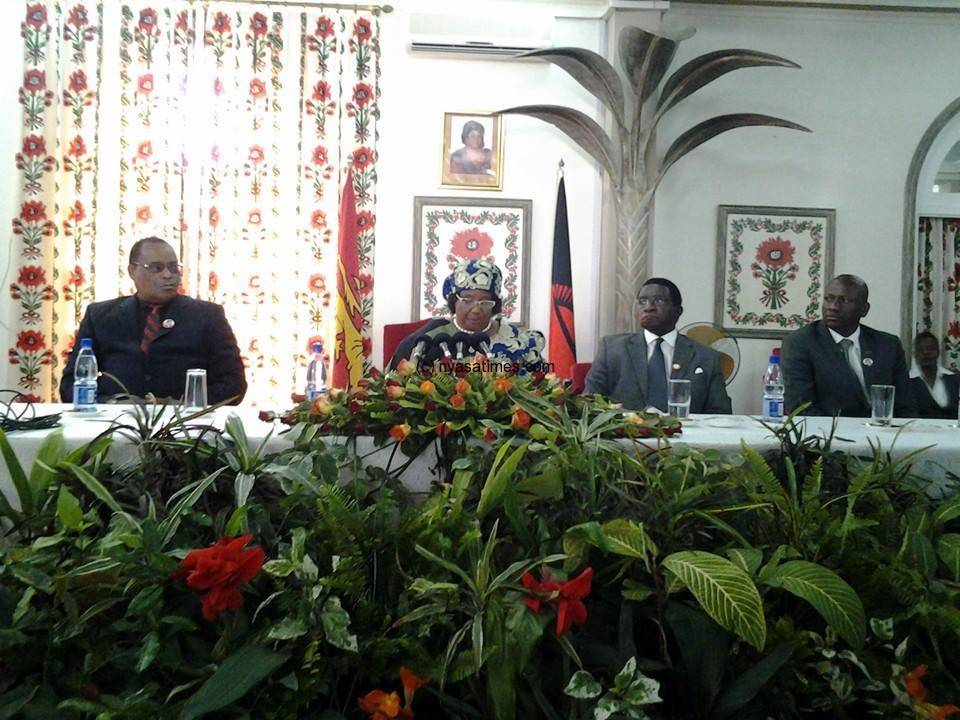 STATEMENT BY
HER EXCELLENCY DR JOYCE BANDA
PRESIDENT OF THE REPUBLIC OF MALAWI AND THE
PRESIDENTIAL CANDIDATE OF THE PEOPLES PARTY ON THE
STATUS OF COUNTING OF BALLOTS
AT KAMUZU PALACE, LILONGWE ON THURSDAY, 22NDMAY, 2014
My Fellow Malawians I wish to thank you all for the peaceful voting that has taken
place generally throughout the country. I note with regret that
there were some exceptions in some areas where we
witnessed some serious disruption of the polling process and in
other cases the non-delivery of polling materials necessitating
that polling in some centers had to take place on the
Wednesday the 21st.
My Government and I are committed to ensuring a free, fair,
peaceful and credible election. Throughout my tenure of office I
have demonstrated the need for an open, inclusive and
participatory process of governance. Hence, the witnessing of
the levelling of the political playing field, opening up of the
airwaves and guaranteeing the freedoms and liberties as
provided for in the Constitution and according to law.
However, I am greatly concerned with the emerging picture
witnessed after the polling day whereby we have seen gross
and unwarranted allegations of rigging, misinformation and
negative propaganda all aimed at undermining the credibility of
the electoral process. I am further concerned to learn that the information system that the Malawi Electoral Commission
intended to use for the management of the results of the poll
had crashed rendering the Electoral Commission unable to
deliver the poll results on time.
It has come to my attention that there some serious
irregularities in the counting and announcement of results in
some parts of the country and the People's Party has
presented specific details of these irregularities to the Malawi
Electoral Commission. These irregularities include but not
limited to:
1.Non availability and non inspection of the voter register at
some polling centres, thereby resulting into some people
voting twice or three times.
2.Serious anomalies where some candidates were winning
by voters whose numbers exceeded the total number of
the registered voters at the centres.
3.Using information technology to block communication
devices of some monitors, and thereby limiting the
monitors' ability to effectively carry out their duties. 4.Compromised votes.
5.Discarded ballots and tampered ballots.
6.Arrests some of the presiding officers.
I am also informed that notwithstanding the fact that the
electoral information system had broken down entailing that
there was no official platform for the announcement of results,
the media continued to announce some results. This could
have tantamounted to misinforming the general public on the
true reflection of the poll results obtaining on the ground and
thereby creating a false impression of the possible winners of
the polls. I am also aware of the concerns that the continued
announcements of poll results from the votes cast on 20th May,
could have influenced the voting that took place on the 21st.
In light of these concerns and concerns emerging from other
stakeholders which includes other political parties, I call upon
the Malawi Electoral Commission to carry out an immediate
manual audit of the whole process. I further wish to urge Malawi Electoral Commission to ensure that it only allows the
accredited media houses to announce only those results that
are verified and are coming from MEC's official platform.
I appeal to all Malawians to continue with their commitment to
peaceful co-existence and to remain calm until the Malawi
Electoral Commission determines the outcome of the poll
results.
May God bless our country.
I thank you for your attention.
- See more at: http://www.faceofmalawi.com/2014/05/full-statement-jb-claims-elections-rigged/#sthash.12ypmucX.dpuf

Basi this time kaanzia side B ya historia

Malawi's elections have been marred by "some serious irregularities", including vote-rigging, President Joyce Banda has said.

She called for an immediate manual audit of the results.

Earlier, a minister killed himself at his home in the capital, Lilongwe, police say.

His spokesman denied reports that his suicide was linked to him apparently losing his parliamentary seat.

The BBC's Raphael Tenthani in Blantyre says Mr Kamanya left a note asking Mrs Banda to take care of his daughter and provide for her education.
'Voting buckets'

Mrs Banda said in a statement that irregularities included:

The arrest of presiding officers who were "caught in the act of rigging"
Some people voting up to three times
"Serious anomalies" where some candidates won more votes than the number of registered voters
Discarded and tampered ballots
Communication devices of some monitors being blocked.

The Malawi Election Commission (MEC) should address these concerns by doing a manual audit of the entire process, she said.

"I appeal to all Malawians to continue with their commitment to peaceful co-existence and to remain calm until the Malawi Electoral Commission determines the outcome of the poll results," the president said.

Eleven candidates ran against Mrs Banda, but her main challenger is seen as Mr Mutharika, the brother of former President Bingu wa Mutharika who died in office in April 2012.

The MEC will announce results when 30% of votes have been counted, its chairman Maxon Mbendera said on Wednesday.

The MEC was "not anywhere in the neighbourhood" of that figure, he added.

Counting was being done manually because the electronic system was "refusing to take the information from the ground where our data clerks are stationed to send the results", chief elections officer Willie Kalonga told the AFP news agency.

Voting spilled into a second day at 13 voting stations, and thousands queued to cast their ballot.

In some places, voting boxes or lids did not arrive so officials used buckets and plastic wrap, correspondents say.

Around 7.5 million people were eligible to vote in the fifth elections since the end of one-party rule 20 years ago.