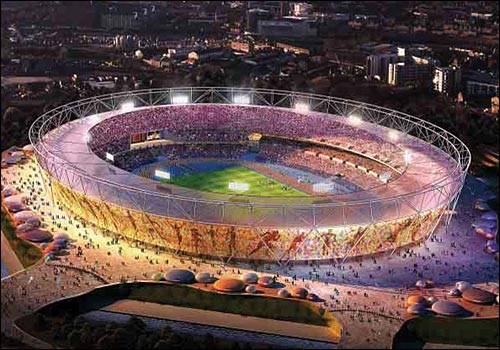 Work on the new £496m stadium - to be built in Stratford, east London -
will start in 2008 and finish at least six months before the opening ceremony

London 2012 officials have hailed the design for their £496m Olympic Stadium following its unveiling on Wednesday. "No-one can say we've compromised on design, on sustainability or on the legacy potential," said Olympics Minister Tessa Jowell MP. Work on the 80,000-seater stadium will begin ahead of schedule in April 2008.

Once the Olympics are over, it will be turned into a 25-000-seater community venue and could also become home to a lower-league football or rugby club. Lord Coe, the chairman of the London Organising Committee, told a news conference that the stadium would be a "stadium for a new era". "It's a stadium that delivers on everything we said we would deliver on; a stadium with track and field as its primary legacy; a stadium that will be reduced from 80,000 seats in Olympic mode to a 25,000-seater community base," he said.

Jowell added: "This is a very important Olympic milestone and this stadium is focused very much on legacy and sustainability. "Once the Games are over this will then be translated into a stadium that will not only host grand prix athletics events and other national sport events but will also serve the communities of the boroughs." She also felt the stadium would be a great addition to the capital's sporting facilities. "This augments and complements the other great stadia that London now has - Wembley, the Emirates and the new development at Twickenham," she said.

The stadium will be the centrepiece for the 2012 Games and will host the opening and closing ceremonies as well as the athletics events. The main features of the design are:

A sunken bowl built into the ground for the field of play and lower permanent seating, designed to bring spectators close to the action;

A cable-supported roof that will stretch 28 metres the whole way around the stadium, providing cover for two-thirds of spectators;

A fabric curtain will wrap around the stadium structure, acting as additional protection and shelter for spectators;

Facilities such as catering and merchandising will be grouped into self-contained 'pod' structures.

Chief architect Rod Sheard, of HoK Sport, said the stadium would make a big impact, but not in the same way that previous Olympic stadia had. "This is not a stadium that's going to be screaming from the rooftops that it's bigger and more spectacular," he said. "This is just a cleverer building. This is a cleverer solution." He added that the ability to convert the stadium from an 80,000-seater venue to a 25,000 one once the Olympics and Paralympics had finished was highly innovative and showed great forward thinking.

"We've ended up with a very tight, very compelling bowl," said Sheard. "The atmosphere inside this bowl, we think, will be pretty special." HOK Sport is a firm of architects with a proven record for designing sporting venues. It has been responsible for such projects as Wembley Stadium, the Millennium Stadium, the O2 Arena, the Emirates Stadium and Ascot Racecourse. Building work on the Olympic Stadium, which will stand at the heart of the Olympic Park, will have to be finished at least six months ahead of the opening ceremony in July 2012 to allow for test events to take place.

The stadium build is being led by construction firm Sir Robert McAlpine Ltd in a partnership including architects HoK Sport and consulting engineers Buro Happold. "It's absolutely non-negotiable that it has to be ready on time," said Radio 5 Live sports news correspondent Gordon Farquhar. "They've got a large contingency fund if things go wrong but they don't want to spend more than that.

"If it's not ready on time, that is probably the greatest shame the nation has faced in years. But it will be." After the Games have finished, the temporary seating will be taken away and the stadium will become a 25,000-capacity venue with a permanent athletics track. An anchor tenant such as a lower-league football or rugby club is actively being sought, but one has yet to be found. London mayor Ken Livingstone said major football clubs such as West Ham would not be able to become tenants. He said: "We made a commitment there would be a permanent athletics facility and we have honoured that commitment. "For West Ham, we have identified a site much better-suited to their needs."
The ODA will be hoping for a positive response to the Olympic Stadium design following the criticism that the official 2012 logo received in June. The stadium was initially expected to cost £280m but the costs have been revised because of inflation and VAT.
Click to expand...

Are we ready for Beijing Olympics?
You must log in or register to reply here.