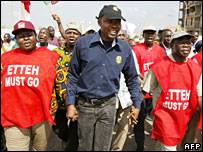 Protestors marched outside parliament in Abuja 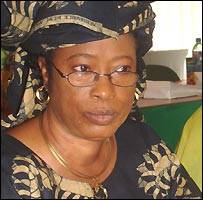 The speaker of Nigeria's House of Representatives, Patricia Etteh, has resigned after weeks of pressure.
An inquiry found her guilty of breaking house rules in awarding contracts worth $5m to refurbish houses and buy cars.

But she had repeatedly refused to step aside and allow a temporary speaker to chair a debate into the findings.

Parliamentary business, including a debate on Nigeria's budget, has been held up for weeks as a result of the affair that has gripped the nation.

The affair has become a major embarrassment for President Umaru Yar'Adua who promised zero tolerance on corruption but failed to intervene, despite increasingly angry protests.

Mrs Etteh, a former beautician and ruling party member, is accused of irregularities in spending $5m of government money to buy 12 cars and renovate two official residences - her own and that of a deputy.

She had consistently denied any wrongdoing but opponents argued forcibly that she should step aside temporarily to allow someone else to chair the debate into the findings of the panel of inquiry, chaired by David Iroko.

The row became so heated that a brawl broke out in parliament earlier this month, during which one pro-Etteh MP collapsed and died.

Mrs Etteh's aides told the BBC that the speaker had decided that she could no longer continue and that her deputy, Babangida Nguroje, has also resigned.

Mr Tsegba will now preside over the Iroko debate, which is expected to take up to a week.

Parliament will then have to elect a permanent replacement to Mrs Etteh.
You must log in or register to reply here.