Making the announcement, Mr. Zoellick said "Ngozi brings a unique set of skills and experience to the World Bank Group. As an outstanding Minister of Finance and Foreign Minister in Nigeria, Ngozi helped lead the country's reform program on issues of fiscal prudence, transparency of government accounts, good governance, and anti-corruption. She led Nigeria's quest for debt relief and helped her country obtain an unprecedented US$18 billion write-off from the Paris Club. Ngozi was also instrumental in helping Nigeria obtain its first ever Sovereign Credit rating (of BB minus) from Fitch and Standard & Poor's. She is an internationally respected world leader. In addition, she knows the WBG well from her 21 years of service. Her commitment to the developing world is unparalleled. I am delighted she has accepted to join my senior team."


Dr. Okonjo-Iweala, a Nigerian national, is Founder of NOI-Gallup polls, an indigenous Nigerian opinion research organization, and co-founder of the Makeda Fund  a fund to invest in African women entrepreneurs. She is currently a Distinguished Fellow at the Brookings Institution. From 2003-2006, she served as Finance Minister and subsequently Minister of Foreign Affairs of Nigeria. As Finance Minister, Dr. Okonjo-Iweala led Nigeria's Economic Team responsible for implementing the Obasanjo administration's far reaching economic and social reform agenda. The reforms made particular progress in restoring macroeconomic stability, tripling growth, initiating a strong fight against corruption, and increasing transparency. 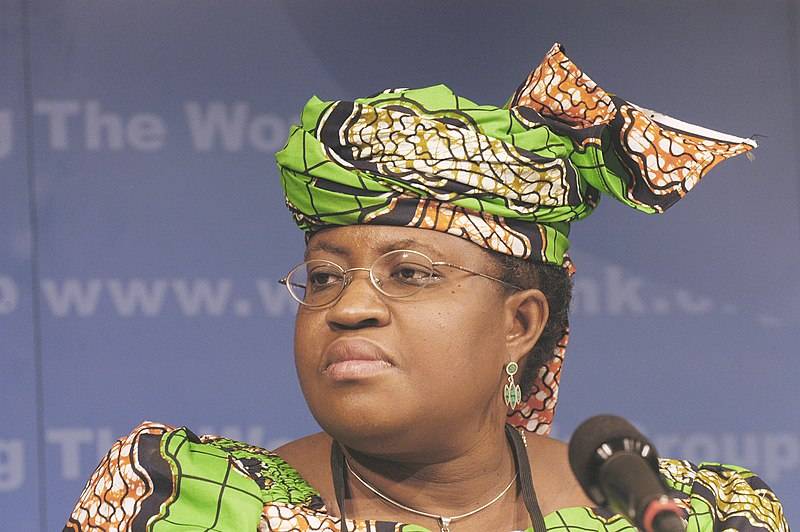 Before taking up her Ministerial appointment, Dr. Okonjo-Iweala served in a number of important positions at the World Bank including Vice President and Corporate Secretary, Director of Operations in the Middle East and North Africa region, and Country Director for the South East Asia and Mongolia Country unit. She joined the World Bank in 1982.

Accepting the appointment Dr. Okonjo-Iweala said: I am delighted to be coming back, and I welcome the opportunity to work through this great institution to make a difference in the lives of our youth, and our hardworking men and women in the developing world. I particularly look forward to working with President Zoellick as he maps out exciting new paths for the World Bank Group."

Dr. Okonjo-Iweala is a recipient of numerous awards and honors including Time Magazine European Hero 2004, Euromoney Magazine Global Finance Minister of the year 2005, Financial Times/The Banker African Finance Minister of the year 2005, This Day Nigeria Minister of the Year 2004, 2005, Honorary Doctorate of Laws from Colby College 2007, and Brown University 2006, Honorary Doctorate of Humane Letters, Northern Caribbean University, Jamaica. She is a member or chair of numerous boards and advisory groups in the public, private and non-governmental sectors including DATA, the World Resources Institute, the Clinton Global Initiative, the Nelson Mandela Institution and the African Institutes of Science and Technology, the Mo Ibrahim Foundation Governance Prize Committee, Friends of the Global Fund Africa. She is also an adviser to the World Bank on the Stolen Assets Recovery (STAR) initiative, and served as a member of the Malan Committee on Bank-Fund collaboration.

In her new position, Dr.Okonjo-Iweala will have responsibility for the World Banks Africa, South Asia, and Europe and Central Asia Regions. She will also take oversight responsibility for Human Resources. Her appointment is effective December 1.
Click to expand...

Some controversy surrounded Okonjo-Iwealas appointment as Finance Minister, as well as that of Foreign Affairs minister, Olu Adeniji, as other ministers were resentful of their United Nations (UN) salaries of over $240,000 (US), compared with their own $6,000 base salary.


The controversy was spearheaded by reform-minded media reports, although Okonjo-Iweala felt that her critics were unjustified. On Friday, 20th July 2007, the Court of Appeal in Nigeria ruled that the salary over payment was illegal and not done within the ambit of Nigeria's laws and directed her and Mr Olu Adeniji to pay back the excess to the account of the state.


The ruling itself is considered controversial since the target should have been the Nigerian presidency, which knowingly violated its own laws in attempting to attract skilled technocrats back to Nigeria. In addition, since the salaries in question were paid by a UNDP fund and not by the Nigerian government, the ruling would in effect have Okonjo-Iweala and Adeniji return their salaries to the United Nations, an act unprecedented in the history of the UNDP fund for repatriating skilled technocrats to developing countries. In Nigeria the income per capital is lower than a thousand dollars.
Click to expand...

By Krishna Guha in Washington

Robert Zoellick on Thursday revamped the top management structure of the World Bank, bringing in Ngozi Okonjo-Iweala, a former Nigerian finance and foreign minister, as one of his top deputies and shaking up the portfolios of his other two managing directors.

Ms Okonjo-Iweala, who worked at the bank for 21 years as a development economist, will become managing director for Africa, South Asia and Europe and central Asia. These regions include most of the borrowers from IDA, the banks concessional loan facility. She will also be in charge of human resources - a sensitive area following disputes over appointments made by former president Paul Wolfowitz - with a brief to encourage diversity.

Meanwhile, Juan Jose Daboub will be put in charge of the Middle East, Latin America and East Asia, regions that are mostly made up of middle income countries. Graeme Wheeler, the other managing director, will be responsible for the banks development networks and work on global public goods such as climate change.

The appointment of Ms Okonjo-Iweala is likely to be popular with the banks staff and non-governmental organisations, some of whom tried to promote her as a possible successor to Mr Wolfowitz.

Ms Okonjo-Iweala told the FT she would seek to promote human infrastructure and physical infrastructure in the regions she will oversee. She said many countries, including in Africa, had achieved macroeconomic stability, but needed support translating this into poverty-reducing growth.

Ms Okonjo-Iweala said that in many nations, including in South Asia, poor physical infrastructure was becoming a binding constraint on growth. The bank has to find more imaginative ways to help, she added.
Click to expand...

This is the another good news for Africa. Congratulations Dr Ngozi u made us proud.

Infact ni kwamba huyu mama ndo alikuwa anapewa nafasi kubwa ya kuwa Deputy wa Ban K moon pale Turtle bay. Lakini she fell out of favour na Gen. Obasanjo and He totaly refused to recommend her to the Incoming Secretary, ingawa Nigeria iliombwa rasmi. Infact by the time she left Nigeria politics her relationship with Obasanjo was all time low and she went to US where she was doing her private consultancy with Fed Reserve na WB.

Ofcourse, yeye kukosa nafasi ya DSG ndo mama yetu Migiro akapewa and Iam certain kama Nigeria ingekuwa resolute kumsupport our own daughter Migiro wouldnt have made the cut. Ngozi is an accomplished personality on all fronts and Zoellick knows her very well because even then she has been a senior consultant for Fed Reserve Chairman Alain Greenspan and Benanke then after for many years.

I can only wish her all the best, if Obasanjo dumped her for political reasons, then smart people saw her potential and I applaud their decision. Thats where politics and economies part their way.

Here is another talk given in Arusha http://www.youtube.com/watch?v=bG2QKbpjDqo
M

NEW WORLD BANK MANAGING DIRECTOR Okonjo-Iweala IS A NIGERIAN (and a woman)!
Click to expand...

alifanikiwa kufuta madeni yote ya nje ya Nchi ya Nigeria
Click to expand...

I give up. Umeshinda.
You must log in or register to reply here.

Gold-backed ruble could be a gamechanger (Interview)
2